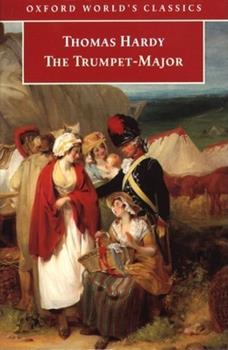 Hardy distrusted the application of nineteenth-century empiricism to history because he felt it marginalized important human elements. In The Trumpet Major, the tale of a woman courted by three competing suitors during the Napoleonic wars, he explores the subversive effects of ordinary human desire and conflicting loyalties on systematized versions of history. This edition restores Hardy's original punctuation and removes the bowdlerisms forced upon...

A good book - too bad it is becoming out of print

Published by Thriftbooks.com User , 12 years ago
I bought this book used since I was having trouble a copy of this book. It is a shame since this is an enjoyable book which takes place in England on the midst of an Attack by Napoleon. The book is written as a historical fiction type. The characters are just great especially when they clamor up to catch King George's carriage passing through the village and people are saying "King Jarge". Even though this book is a historical approach, Hardy is true to his style of presenting real life events. Even though the beginning of the book has a slow introduction, the book takes off and becomes really enjoyable. If you can find this book, a used copy is not very much. I bought the Penguin Classics used version for a few bucks.

A superb character study, if not a great novel

Published by Thriftbooks.com User , 19 years ago
I have read most of Thomas Hardy's novels--he is, along with Wilkie Collins, my favorite novelist--and this is the first one by which I have been disappointed. Still, a disappointing book by Hardy is worth ten by nearly anyone else, so let me explain. The ending felt quite out of the blue and abrupt compared to the events leading up to it, yet in retrospect, it makes more and more sense.The ending aside--where the oddness is confined to just the last two pages--this is a superb character study of five disparate main characters and a handful of minor characters. Hardy is a master at imbuing each character with not only distinct personalities, but with the inconsistencies and flaws that make them leap, whole and warm-blooded, from the page. His characters are never stock people; they always seem as though they are people you could (or do) actually know in your own life.The primary character is Anne Garland, a lovely country village girl who is much sought after by three different local men. These include Festus Derriman, a ne'er-do-well with a temper and a lust for his uncle's money; John Loveday, a soldier and the trumpet-major of the novel's title, who is the kindest, most patient character I believe I have ever seen in a novel; and John's younger brother Bob, who is a boisterous sailor with good intentions but a short attention span when it comes to the ladies. The machinations by which these three seek to catch Anne's eye is endlessly inventive and endlessly interesting for the reader, and her varied reactions to their attentions is a marvel of observed detail and the inconsistency of human nature. By turns hot and cold towards each of the men, Anne never seems shallow or thoughtless--merely human. There is also another sharply etched female character, the actress Matilda Johnson, who appears only a couple of times, but who is the linchpin of much important action.As always, Hardy likes to insert subtle humor into even the most serious of situations. In detailing the village's concern about Napoleon (who is referred to frequently in the book by the derisive nickname "Boney"), Hardy writes:Widow Garland's thoughts were those of the period. "Can it be the French?" she said, arranging herself for the extremest form of consternation. "Can that arch-enemy of mankind have landed at last?" It should be stated that at this time there were two arch-enemies of mankind, Satan as usual, and Buonaparte, who had sprung up and eclipsed his elder rival altogether. Mrs Garland alluded of couse to the junior gentleman.You will be surprised, as I was, by the man with whom Anne Garland ends up. Yet now, just a day or two after having finished the novel and having been almost affronted by the abruptness and seeming insuitability of the ending, my position has softened and I can see that Hardy was actually quite true to the characters, their motivations, and their choices--however inconsistent they may at first have seemed to the reader. This is not b

Published by Thriftbooks.com User , 21 years ago
She was walking through the library carrying the university's entire Hardy collection. I already had a nasty schoolboy crush on her, but after that day I was jello. And perhaps it began on the afternoon she lectured on Thom. Hardy, describing him as a poet who sacrificed his art to survive as a novelist. Yet, his novels were not pot-boilers, and Hardy eventually returned to his true muse. I shouldn't write this - let Linda explain it to you.

Published by Thriftbooks.com User , 23 years ago
Now I know this is not one of better known Thomas Hardy Books. And I know it probably isn't all that well thought of by critics who like the doom of many of his other books (that doesn't sound good, but if you get the chance read them anyway!) I like this because it is nice and simple, about a gil called Anne, who is in love with someone called Robert, who is continously unfaithful to her. And of course you have John, Robert's brother, who is in love with Anne. You sympathise so much with the characters. And, in this book, there is a happy/sad ending, but I would spoil it if I said any more. Without reading this, you might feel that Anne is a bit stupid to stand by her man, but just go and read it and you'll understand better. Perhaps this book isn't a great literary masterpiece like other works, but it is fairly easy to read, which is exactly what I advise you to do!
Copyright © 2020 Thriftbooks.com Terms of Use | Privacy Policy | Do Not Sell My Personal Information | Accessibility Statement
ThriftBooks® and the ThriftBooks® logo are registered trademarks of Thrift Books Global, LLC