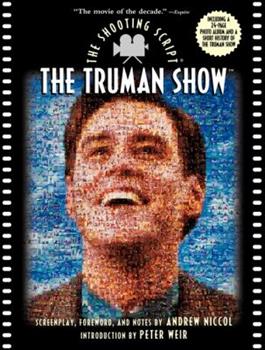 The Truman Show: The Shooting Script

Jim Carrey is Truman Burbank, the most famous face on television, only he doesn't know it. He is the unwitting star of a nonstop, 24-hour-a-day documentary soap opera called The Truman Show, with every moment of his life broadcast to a worldwide audience. Everyone around him is an actor. He is a prisoner in a made-for-TV paradise. This is the story of his escape.Rarely has a first-time collaboration between a writer and director produced such a stunning...

Published by Thriftbooks.com User , 18 years ago
What a great "mockumentary" of the ultimate reality show. Full-color photographs and a satire treatise on the history of the Truman Show complement a truly brilliant script.

Published by Thriftbooks.com User , 18 years ago
This is one of the greatest movies ever, mostly because of the brilliant script. It is pretty touching, creative, emotional and it really makes you think about how privilegded you are with your own privacy. Christof tries, or better say he still did, to create a „perfect world" for Truman. A life, without any real emotions and "the best human actors". But the movie shows that a life without any emotions, including sadness, fear or pain, could never exist.But nevertheless, sometimes I was wondering, how realistic und plausible it seems. You begin to ask yourself what if this all happens to you!?I think this movie is open to many interpretations, which is what makes it so interesting.

One of the greatest scripts of all time

Published by Thriftbooks.com User , 22 years ago
This is one of the greatest movies ever, mostly because of the brilliant script. The first time I saw the movie I thought it was simply okay. But after my second viewing I noticed the subtle symbols and how great the script is, I have seen this movie 20 times and I can honestly say I have noticed something new each time, how many movies can you say that about. All the street signs are named after actors (Lancaster,Stewart,Barrymore)and the characters' names as well (Meryl (Streep) Laurence (Oliver) Vivian (Leigh) Angela (Lansbury) Spencer (Tracey) Marlon (Brando) and Pluto) and my personal favorite the I Love Lucy reference.

Published by Thriftbooks.com User , 24 years ago
The book is as described: a facsimile copy of the shooting script. Interesting to see how much was actually dropped for the movie. While an annotated script would have been nice -- particularly more thoughts on why the differences between the original script and what was shot -- this book does what it set out to do, and it's definitely a great script.

Published by Thriftbooks.com User , 24 years ago
The Truman Show is a movie that shares the same admonitory vein of Orwell, Huxley, and Kafka. It is such a relief to breathe again--a movie that is actually contemplative, intelligent, thought-provoking, and ominous in its warning: The loss of freedom in a media-soaked culture where Henry Ford, or in this case: Cristof--the despotic,possibly insane, creator of the Truman Show is God! That's the most terrifying aspect of the movie for me--Yet, the movie left me, despite the happy ending, feeling a little melancholy. Poor Truman, I thought. The film is a constant reminder of the alienation and gaudiness, falsity of our own commercially centered culture. Strangely, Truman's plight took place in America--The Land of the Free!?
Trustpilot
Copyright © 2022 Thriftbooks.com Terms of Use | Privacy Policy | Do Not Sell My Personal Information | Cookie Preferences | Accessibility Statement
ThriftBooks® and the ThriftBooks® logo are registered trademarks of Thrift Books Global, LLC