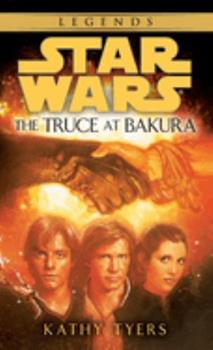 The Truce at Bakura

No sooner has Darth Vader's funeral pyre burned to ashes on Endor than the Alliance intercepts a call for help from a far-flung Imperial outpost. Bakura is on the edge of known space and the first to meet the Ssi-ruuk, cold-blooded reptilian invaders who, once allied with the now dead Emperor, are approaching Imperial space with only one goal; total domination. Princess Leia sees the mission as an opportunity to achieve a diplomatic victory for the...

Enjoyable, if not great

Published by Thriftbooks.com User , 16 years ago
Occuring directly after the battle of Endor, this picks up where Return of the Jedi left off. First, lets talk about the good parts of this book and why you should read it. The interaction between the Imperials and the Alliance. Having to work together makes for a great story. Those were by far the best parts of this book. I actually enjoyed Luke's character in this book, which is rare, since I usually find him rather bland compared to the others. The appearance of Anakin. Eh, could have been done better and with more power, but still nice to see. The problems with this book are in the other characters. Han is barely talked about, and he never gets to do anything. Leia just doesn't seem like Leia, but then again, I'm not sure she has ever been written correctly. I wasn't too fond of the alien bad guys either. They just didn't do it for me for some reason. Overall, a good read for most Star Wars fans. It's nice to be able to pick up the story directly after the last movie and move right into the Expanded Universe novels.

More fun long ago and far, far away...

Published by Thriftbooks.com User , 19 years ago
Being a first time SW novel reader, Star Wars: The Truce at Bakura seemed like an excellent place to start, as it begins a mere 12 to 24 hours after the end of Return of the Jedi (which makes this novel Episode VII, I guess).Still flush from the success of their critical attack against the Empire, the Rebel Alliance troops receive a distress beacon intended for the Emperor and his more powerful Death Star. It seems the Rim World Bakura is under attack by a hostile and previously unknown race from outside the borders of the Empire controlled universe. Seeing an excellent political, not to mention military, chance to shore up support for the Alliance in the coming chaos that will undoubtedly erupt following the spreading news of the Emperor's death, the usual suspects (Luke, Leia, Han, etc) round up and head out to aid the threatened planet.As a Star Wars story this is a fairly routine, albeit fun, Space Opera filled with derring do and political intrigue. Some reviewers may grumble that there was far too much political intrigue, but I thought that it was well handled and realistic considering the tale's timeline. The book is filled with nice, little intelligent touches as well, like having the chief Imperial baddie not be some power mad Emperor wannabe. I also liked how Luke suffered some debilitating fallout from his final face off with the Emperor and Leia had to face some serious anger issues stemming from discovering just who her father really was. Sadly Han Solo doesn't get to do much except get jealous and shoot people (for different reasons, not jealousy). Comic relief is provided by C-3PO and R2-D2, naturally.The reptilian Ssi-ruuk get a pretty high register on the Hissable Villain Rating Scale, the "entechment" of their human prisoners is fairly blood curdling and only surpassed by their abusive treatment and constant brainwashing of their Force strong 'pet'/prisoner Dev (a sad character that ads a bitter dose of pathos to this grand adventure series chapter).While giving five stars to The Truce at Bakura may prove (with further SW spin-off reading) a tad excessive, the novel was far too entertaining of a read for me to be comfortable with just four stars. Recommended.

The best - or very close to it.

Published by Thriftbooks.com User , 22 years ago
Kathy Tyers did an amazing job with this book. I loved the fact that it picked up the day after the battle of Endor (Luke is still healing from his battle with Vader and the Emporer).I guess it may have started a little slow, and I think the bit about Leia's psycological issues with Vader being her father and all was unnecessary, or over done. But these were truly minor annoyances at most. The rest of the novel made up for it.I've read a lot of the Star Wars novels. In my opinion, "The Truce at Bakura" by Kathy Tyers rates at the top with Timothy Zahn and Michael A. Stackpole.I can see why this novel may not appeal to the 12-15 year old reader. But for someone with a little more maturity, who appreciates a well-contrived and well-written story with accurate character representation, and believable dialogue, I recommend reading this book.I think the author did a particularly good job in her portrayal of Luke Skywalker. I found his thoughts and actions to be in perfect accord with the character defined by the movies.I only wish Kathy Tyers would write another one.

Published by Thriftbooks.com User , 22 years ago
Leia seems to hate the idea of Vader being her dad, and she doesn't want anyone to know it. But Han is there for her the whole time, she wiil be okay.

This book was great.

Published by Thriftbooks.com User , 22 years ago
This book was really great. Kathy Tyers did a wonderful job of capturing the spirit of the original Star Wars series.
Copyright © 2020 Thriftbooks.com Terms of Use | Privacy Policy | Do Not Sell My Personal Information | Accessibility Statement
ThriftBooks® and the ThriftBooks® logo are registered trademarks of Thrift Books Global, LLC