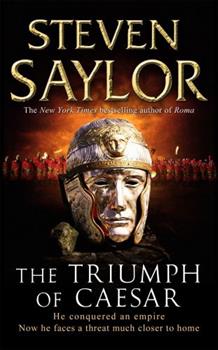 This description may be from another edition of this product. The Roman civil war has come to its conclusion - Pompey is dead, Egypt is firmly under the control of Cleopatra (with the help of Rome's legions), and for the first time in many years Julius Caesar...

A Triumph for Saylor, Too

Published by Thriftbooks.com User , 13 years ago
Steven Saylor returns to the Roma Sub Rosa series for his twelfth volume featuring Gordianus the Finder, a private eye in Rome around the end of the Roman Republic. This volume finds the now 64-year-old Gordianus returned from Egypt and, as always, rubbing elbows with people several levels above his pay grade. On the eve of Caesar's long-delayed four Triumphs, Gordianus is hired by Caesar's wife, Calpurnia, to investigate what she fears is death plot against the dictator. Gordianus reluctantly takes the job and sleuths his way across Roman society - we meet Cicero, Caesar, and Mark Antony, as well as numerous lesser known Romans, such as Fulvia (with her sights set on Antony), the young Octavius (later and better known as Augustus Caesar), and a playwright named Laberius. Gordianus also interviews Vercingetorix, the imprisoned leader Gallic chieftain awaiting his imminent execution, Cleopatra, in town for the Egyptian triumph with her young son Caesarion, and her defeated sister Arsinoe who is slated for execution. Saylor weaves a page-turner mystery with fascinating details of Roman political and social life (including the development of the Julian calendar). Highly recommended.

Published by Thriftbooks.com User , 13 years ago
Thee are a number of mystery writers whose work is set in ancient Rome: Saylor is easily the best of these. The city of Rome and Italy is his forte. You get an excellent sense of the city, the social life, and the political intrigues: the "whodunit" aspect is secondary to the historical flavor. There are mysteries, and usually murders, to be sure, but it's the people, the characters, the details, and the flair for writing that make Saylor's novels so good. In the series you'll learn about the forum, and whether it was good luck or bad luck to have pigeon droppings land on your head while orating, you'll learn about voting procedures, and you'll learn in this novel about the dreaded Carcer and the Tullianum prisons. Triumph of Caesar (which should really be Triumphs of Caesar--since there were 4 here) involves Gordianus and his family in murder, in dealings with Caesar, Calupurnia, Cleopatra, Antony, and others. Saylor's Judgement of Caesar, set in Egypt, was not as engaging as this--as noted, it's a return to Rome, which is Saylor's strength. If you're new to the series, there's plenty of more delightful reading--novels and short stories--a great way to learn Roman history. You'll also enjoy Saylor's Roma--an episodic novel about Rome from it's earliest days (Gordianus is not present here). These are also books that you can happily return to every couple of years: ordinary mysteries are less amenable to this, since you know the solution. But with Saylor's novels, the solutions to the mysteries are just a part of the enjoyment. This is historical fiction at its best!

The Finder's Back In Rome And Better Than Ever

Published by Thriftbooks.com User , 13 years ago
I've followed the career of Gordianus the Finder ever since Steven Saylor first introduced him to us in Roman Blood. Every one of his investigations has been intriguing and worthwhile, but I find those set in the city of Rome itself particularly interesting because the Roman Empire's capital makes such a fascinating backdrop. Thus I was very happy to find Gordianus back home in Rome for this adventure. Julius Caesar has finally gained power as Dictator of the Roman Empire. Turmoil continues to bubble along under a surface calm, and Caesar's position is still far from secure. As Caesar plans a series of triumphs to celebrate his many victories, his wife Calpurnia fears for his life and calls in Gordianus to investigate. Gordianus interviews many prominent Romans and works hard to determine whether a conspiracy exists and who is involved. The unraveling of the story is fascinating to follow, and as always with a Steven Saylor work the reader has the additional benefit of learning a great deal about the politics and personalities of Rome at a pivotal moment in its history. Gordianus complains several times during this adventure of his advancing years, but I trust he will continue to delight us and educate us with more stories in the future.

Published by Thriftbooks.com User , 13 years ago
Another reviewer here opined that "The Triumph of Caesar" may be the best of Steven Saylor's Gordianus the Finder Ancient Roman "Sub Rosa" mystery novels. She might be right. At any rate, it is at least another strong entry in a strong series. Unlike so many mystery series that grow tired as the number of volumes grows, Saylor's Gordianus books remain compelling and they even get better. The events at the end of the previous novel in the series, "The Judgment of Caesar", were sufficiently ambiguous that they could have signaled the end of Gordianus's career, but "The Triumph of Caesar" finds the detective back in Rome, in 46 BCE, on the eve of Julius Caesar's celebration of four triumphs to mark four recent military victories. But Caesar's defeat of his enemies on the battlefield has not meant the end of all of those who might wish him dead, and Gordianus finds himself drafted by Caesar's wife into attempting to uncover a possible conspiracy against the Dictator, a task Gordianus is willing to undertake because it has already cost the life of a friend. Steven Saylor has a particular knack for creating vivid and realistic characters, even secondary and minor figures, who have the breath of life, and are not memorable only because they are quirky caricatures. Saylor seems to genuinely care about the fates of these characters (some of them are fictional creations, but others are drawn from historical sources) and he causes his readers to equally care. Although the world of Gordianus the Finder is often filled with sorrow, loss, and woe, Saylor unfailingly conveys a sense of fundamental humanity, where salvation and redemption are found in love and friendship. His "Sub Rosa" books are worth reading not only as good mysteries, but also as simply good novels.

Superb Historical with a Marvelous Cast of Characters

Published by Thriftbooks.com User , 13 years ago
This may be the best of the Gordianus mysteries. It is absolutely gripping. Intending to savor it over a couple of days at least, I read it in one sitting. Calpurnia, Caesar's wife, has been troubled by evil omens and asks--or rather, demands--that Gordianus find the person who is plotting against Caesar's life. Is saving Caesar's life a worthy project? Gordianus is not so sure, and in any case, he wishes to live a life of peace, so he refuses the commission. But the previous "detective" on the case, an old friend, has been killed, and Gordianus is drawn into seeking justice for the crime, and, in the process, finding out who, if anyone, is plotting against Caesar's life. In his investigation, he must meet and interview many historical figures--Cicero, Brutus, Cleopatra and her sister, Arsinoe, Antony, and Vercingetorix, the defeated leader of the Gauls. Remarkably, Saylor brings these figures vividly to life. The novel is informed by a depth of compassion for human beings living in a brutal times that is rare in an historical mystery. It engages your emotions and makes you truly care about the characters. This is a truly special novel which works well as a mystery and also transcends the genre.
Copyright © 2020 Thriftbooks.com Terms of Use | Privacy Policy | Do Not Sell My Personal Information | Accessibility Statement
ThriftBooks® and the ThriftBooks® logo are registered trademarks of Thrift Books Global, LLC