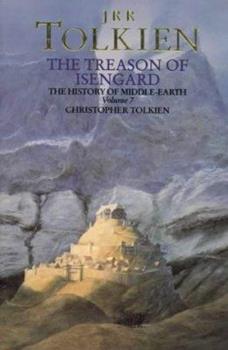 The Treason of Isengard is the seventh volume in Christopher Tolkien's History of Middle-earth and the second in his account of the evolution of The Lord of the Rings. In this book, following the long... This description may be from another edition of this product.

Great continuation of a great series

Published by Thriftbooks.com User , 18 years ago
I never realized how interesting it would be to read a detailed, almost blow-by-blow, account of the creation of a masterpiece. Christopher Tolkien has done all Tolkien scholars, both professional and amateur, a great service by detailing his father's often tortuous development of Middle Earth especially Rohan, Saruman and Isengard, and the creation of Treebeard and the wonderful Ents. Also versions of Frodo and Sam's further journey that are very different from what makes it into "The Two Towers" are fascinating. Those who think that Mr. Tolkien has only done this for the money should look again at these works (if indeed they even looked at them at all). No person in his or her right mind would go through this amount of detailed work just for money. No amount of money would be enough to pay for work of this magnitude.

Fine Literary History of the Lord of the Rings Continues

Published by Thriftbooks.com User , 19 years ago
Once more Christopher Tolkien has done a valuable service for literary historians and anyone interested in the craft of writing in his elegant overview of his father's struggles in creating the Lord of the Rings. His recounting of his father's writing is a fascinating saga in its own right, chronicling his father's subtle changes in the personas of characters as diverse as Boromir and Treebeard. Of special note is how significant Boromir's role might have been if he hadn't died in battle at the end of "The Fellowship of the Ring". I was also intrigued with Tolkien making numerous changes in his depiction (and indeed, names for) of Gondor and Lothlorien, among others. There is a excellent overview on Tolkien's map of Middle-earth, noting its significant changes over the years from the 1920's until it assumed its present form for the Rings trilogy. At the end of this lengthy tome is a fine introduction to runes and how they underwent their own transformation while Tolkien was at work writing the Rings trilogy.

Published by Thriftbooks.com User , 21 years ago
. . .to the History of Middle Earth Collection."The Treason of Isengard" is the seventh volume in Christopher Tolkien's masterful "History of Middle Earth" series, and the second volume in the subset within that series dedicated to the history of "The Lord of the Rings". As I've suggested in a previous review, all those prospective authors out there should "read, mark, learn, and inwardly digest" what Christoper has done in these volumes. He has provided an in-depth, graduate-level seminar in the process behind writing a novel. For this reason alone, the book is valuable.But the book's value far exceeds its mere literary merit for those who truly love Middle-Earth. (Although I disagree with much of what Peter Beagle has written about "The Lord of the Rings", I can sympathize with his desire to go to Middle-Earth! I wish I could, as well!This book details the material that eventually became the end of "The Fellowship of the Ring" and the first part of "The Two Towers". In it, we see the earliest forms of the visit to Lorien, the fall and repentance of Boromir, and the events leading up to the fall of Isengard (which is related in the next volume). Of particular interest:Tolkien still struggles with how to portray the Ents. Originally, Treebeard was Giant Tree Beard -- and an enemy.The numerous illustrations provided throughout the book. I found particularly interesting the various stages of development thatOrthanc underwent.The Appendix on runes. Apparently, the runic inscription on Balin's tomb in Moria led Tolkien into an elaborate description of runes and their types, who used what, etc. Some of this material made it into the Appendix of "The Lord of the Rings" -- but not all of it.Altogether, and enjoyable read. I fervently wish that more effort was concentrated on Tolkien scholarship than on fandom -- but such is the way of the world, I suppose.Five Stars -- and well worth it.

The Roots of Betrayal

Published by Thriftbooks.com User , 21 years ago
In this volume, Christopher Tolkien continues to explore his father's manuscript versions of The Lord of the Rings. By this point in the story, it had clearly grown beyond the "Hobbit sequel" the elder Tolkien had originally set out to write, but he was still not entirely certain of the road it would be taking. As he made new discoveries about his characters and the world in which they lived, it was necessary to go back to the beginning and make the existing text match the new developments.It is particularly fascinating for me as a writer to see the footprints of the master, to see writing as *process* rather than merely as finished product. Reading this volume and the others in the History of Middle Earth series will be instructive to those non-writer family members and friends who can't seem to understand that novels don't simply pour forth fully formed, to be written from beginning to end the way one might write a thank-you note or an essay. There are false starts and dead ends that have to be discarded, changes to be made, and most of all long periods of seeming idleness while the hands are still but the brain is hard at work struggling with issues of plot and character, times when interruption is unwelcome because it can disrupt the train of thought and send fragments of plot and idea flying in all directions like a shattered glass.

Published by Thriftbooks.com User , 23 years ago
In the seventh volume of The History of Middle Earth Christopher Tolkien takes us from Hobbiton to Fangorn as his father first wrote it. It is sometimes simply amazing to see how much work JRR Tolkien put into LOTR. In this book you will see the countless revisions, thanks to Christopher's indespensible notes, along with early sketches of Orthanc, Minas Morgul, and Moria. I would recommend this book to any Tolkien fan who wants to learn more about The Lord of the Rings.
Trustpilot
Copyright © 2022 Thriftbooks.com Terms of Use | Privacy Policy | Do Not Sell My Personal Information | Accessibility Statement
ThriftBooks® and the ThriftBooks® logo are registered trademarks of Thrift Books Global, LLC