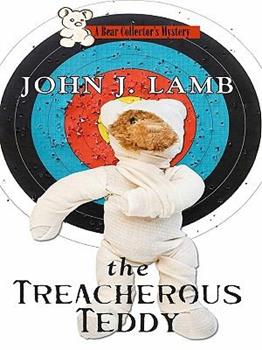 (Book #5 in the A Bear Collector's Mystery Series)

Retired officer Brad Lyon pieces together his latest teddy bear while also helping his deputy wife piece together a mystery. A farmer dies by an arrow to his heart. Had he been hunted? As the suspect list grows, they'll have to work fast to root out a killer. Original.

John Lamb has the right balance.

Published by Thriftbooks.com User , 12 years ago
John Lamb has the right balance for writing a very interesting murder mystery while sharing information of the world of teddy bears. I have been collecting teddy bears for 35 years now and I also am an avid reader and I really like murder mysteries. Having my two interests combined is a great bonus. The story flows so well that I usually have it read in a day as I can't put it down.

Published by Thriftbooks.com User , 12 years ago
John J. Lamb's THE TREACHEROUS TEDDY provides a fine mystery centered around a retired cop and a mystery revolving around collectible teddy bears. Clues to a death from a possible hunting accident immerse the first teddy bear jubilee in small-town danger in this thriller. A fine pick for lending libraries strong in murder mysteries.

Published by Thriftbooks.com User , 13 years ago
Well, yes, at the ripe old age of 65 I do still, yet, and occasionally collect a teddy bear if it strikes my fancy...so that was what first drew me to the book. I have read the entire series, and have enjoyed following the characters as they develop and solve their crimes. I believe Mr. Lamb was, at one time, an officer of the law and it reflects in his writing...his fictional detective work and police relationships have a much more realistic sense than most. All in all, Mr. Lanb's books are a dependable, good read with interesting and well drawn out characters, and good mysteries to solve. Mr. Lamb also provides good references for collectors who are interested in exploring bear collecting further in the real world.

Published by Thriftbooks.com User , 13 years ago
"The Treacherous Teddy" is about the murder of a farmer with a hunting arrow just as a teddy bear show is about to open. I won't say more so that none of the book's delights are given away. On the surface, being able to combine the characteristics of traditional "cozy" and "police procedural" mysteries in the same book seems unlikely, but John Lamb has now done it with great success in five "Bear Collector's Mysteries." The "cozy" element is mostly in making and collecting teddy bears by the narrator and his wife, and the "police procedural" element is in solving the crime. Lamb knows both fields personally: he and his wife collect artist teddy bears, and he was a homicide detective for many years in San Diego County, California. He has translated his experiences into highly readable and entertaining novels. Lamb's ability to write gripping action sequences is shown on his website in the excerpt from his debut novel, "Echoes of the Lost Order," but I was somewhat disappointed in the novel as a whole. The problems were just those of a beginning writer. It has since been rewarding to follow Lamb's development as a writer through the five "Bear Collector" books. His first few pages are no longer loaded with somewhat clunky exposition. Exposition is still there, of course, but now it's integrated into the narrative and the action gets going promptly. The books are paced better, and Lamb's prose style has grown both smoother and less diffuse. He has really "hit his stride" as a plotter and writer of engaging and absorbing mysteries, the kind that keep you reading past your bus stop or bedtime because you are caught up in the story and because of the easy flow of the writing. He also has a joyful knack for truly outrageous puns. "When all else fails, hug your teddy." Lamb quotes that bit of arctophile advice in "The Treacherous Teddy." His "Bear Collector" fans will need to take it if the note on his website that he is now working on "a new and truly unique murder mystery series" means that there will be no more books about Brad and Ashleigh Lyon. I may hug a teddy, but I respect Lamb's decision if he feels that he has done all he can with the teddy bear milieu. The teddy bear element drew my attention to his books in the beginning because my wife and I also collect artist teddy bears, but it is his characters and his ability to tell a good story that keeps me reading what he writes. I will certainly look for his next book with eager anticipation, whatever the milieu.

Published by Thriftbooks.com User , 13 years ago
I absolutely love this series. I received an email last week from Mr. Lamb's own website and sadly this will be the last of this series "per" the publisher. Shame on them!!
Trustpilot
Copyright © 2022 Thriftbooks.com Terms of Use | Privacy Policy | Do Not Sell or Share My Personal Information | Accessibility Statement
ThriftBooks® and the ThriftBooks® logo are registered trademarks of Thrift Books Global, LLC