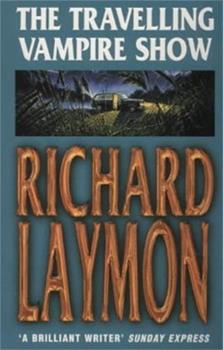 This description may be from another edition of this product. When the one-night-only Traveling Vampire Show arrives in town, promising the only living vampire in captivity, beautiful Valeria, three local teenagers venture where they do not belong, and discover...

The Laymon Legend Lives On!

Published by Roger Terry , 3 months ago
The Traveling Vampire Show is one of the greatest vampire tales ever told. A dark, yet loving coming-of-age spectacular that will shock, scare, and leave you thirsting for more. With an unforgettable ensemble of characters, a unique premise, and one of the most original and out-of-nowhere endings you could possibly imagine, Stephen King was not wrong when he said "If you're missing Laymon, you're missing a treat." That you are. So, if you are brave enough, dive on in and enjoy the show.

Published by Thriftbooks.com User , 15 years ago
Richard Laymon is one of those writers that you either have to love or hate. There really is no middle ground when it comes to a book like The Traveling Vampire Show, or any of Laymon's books. When there is this much graphic violence and vivid sexuality within any novel, a bunch of readers are going to be turned off immediately. Granted, most avid horror readers will easily be able to handle the material within a Laymon novel, but some leisurely readers who just "heard he's good" could be getting themselves into something that they really have no idea about. The Traveling Vampire Show fits directly into that category. A graphic, unflinching story about three best friends, and their journey over the course of one hot summer day to get in to see the Traveling Vampire Show, and the main attraction, the gorgeous, beguiling, and lethal Valeria. The story begins fairly peacefully, with the three friends, Slim, Rusty, and Dwight, uniting in the early morning to journey out to Janks Field to try and catch a glimpse of Valeria during the set up. As the trio journeys out to the field, we are treated to a creepy backstory about Janks field, and why it is so reviled by the community. Once the gang gets to the field, only to find it abandoned, they are attacked by a lethal dog, and must take refuge atop the snack stand. This is just the first of many strange, creepy events that will happen to the teens throughout the course of a single day. As the day grows old, and the show nears, Laymon succeeds in building an extremely creepy atmosphere to build up everything to an insane climax at the show, when, as any intelligent reader would know, all hell breaks loose. The different thing about this novel from other Laymon efforts is the total focus throughout the pages to develop and grow the main characters. Specifically, Dwight and Slim, the two best friends who start to become really close throughout the events of the day. Due to the focus on the relationship aspect, we don't get much Laymon violence throughout the meat of the book, but we instead get a large amount of awkward, playful sexual scenes between Dwight and Slim. But that is what makes this book so great. By the time the show actually begins, the whole novel has been building up the characters so we actually care for all of them, and it has been building up the tension so we are looking forward to the Traveling Vampire Show almost as much as the three friends who are trekking through the woods to see it. What I thought was going to be a classic Laymon novel that gets started from page 1 and doesn't stop until the end, turned out to be a very well-written coming of age tale about love and friendship between two best friends of the opposite sex, who have always been limited in their relationship with each other, due to whatever extraneous reasons. Dwight and Slim are the characters who carry the entire novel. You are rooting for them to get together from basically the first conversation

Published by Thriftbooks.com User , 18 years ago
I've read a good chunk of Laymon's work over the years, and I'm convinced that this book is definitely his best.The characters are in no way carbon copies of others you come across in horror books. Each one of them is carefully thought out. The same goes for the setting and plot.Laymon has covered the vampire tale before (Bite) but this story is more mindful of Dan Simmon's Summer of Night and, to an extent, even To Kill A Mocking Bird by Harper Lee.If anything else, this was a book for horror fans looking for a tale that takes place in a time perhaps not more innocent than the present, but unfettered by cell phones, computers, etc when teens and children had to use their minds to entertain themselves.Laymon is undoubtedly a master of a terse style that conveys so much. By comparison, many horror writers with flowery descriptions often fall short of the mark.Read it and remember that one summer where you felt everything was about to change, for better or worse, and you put off growing up in order to savor what little mystery and magic was left in the world.

I loved this book...I bet you will too

Published by Thriftbooks.com User , 20 years ago
If you're a fan of the coming-of-age horror novel, if you liked Stephen King's "It," Robert McCammon's "Boy's Life," or Dan Simmons' "Summer of Night," you've got to read this book.This is the second book I've ever read by Richard Laymon (I read "Night Show" years ago), but after this one, I'm going to have to seek out some more of his books. It's too bad he passed away this year and won't be giving us anymore really good books like "The Traveling Vampire Show".TVS is not a perfect book. I would agree with some parts of the negative reviews on this page. Some of the characters, especially the villains, could have used some more fleshing out, but there's too much that's good about this novel not to give it five stars. I like to try to read at least one good "summer" horror novel each year, and this one is certainly it for 2001.The main characters, especially Slim and Dwight, are interesting and emotionally involving. Best of all, Laymon really succeeds at creating an imaginative world in this novel that you just don't want to leave.I remember lying in my bed for hours on end each summer morning after waking up the year Stephen King's "It" came out, when I was thirteen. The book was so good, I didn't want to do anything but read all day. I felt some of that again with this book.It's true that Laymon's not as poetic as Bradbury, as consistently good as King, or as emotionally moving as McCammon, but there are elements of all of these styles mixed together in this novel. And that makes for a pretty good concoction, in my book.

Published by Thriftbooks.com User , 21 years ago
To keep it brief, this is Laymon's best book...so far. The characterizations--particularly the relationship between Dwight and Slim--are the author's most mature efforts yet. But don't let that comment fool you into thinking good ol' Richard has slowed down. This novel still packs the trademark Laymon roller-coaster-ride wallop. And for those who truly love books, the CD version of this novel is beautiful.A treat for Laymon virgins or long-time fans.
Copyright © 2020 Thriftbooks.com Terms of Use | Privacy Policy | Do Not Sell My Personal Information | Accessibility Statement
ThriftBooks® and the ThriftBooks® logo are registered trademarks of Thrift Books Global, LLC