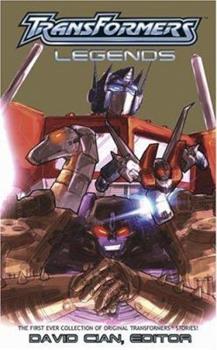 by David Cian and Brandie Tarvin

Never before published Here is an all-new collection of short stories, featuring original adventures by the fan-favorite writers who've worked on the various Transformers comic books and animated series Lineup of authors to be determined] And since ibooks' license with Hasbro isn't limited to just one set of robots in disguise, expect to find tales based on Transformers: Armada, Transformers: Beast Wars, and Transformers: Generation One, among others...

Published by Thriftbooks.com User , 12 years ago
This is a great book. I bought this at a store in 2004 when it first came out. I thought it unusual to see a short-story collection like this, but I gave it a chance having been a fan since 1984. I'm glad I did! There's some real gems in here! I thought I accidentally sold this in a lot in town a few months ago; fortunately I found it again last night! The Editor, David Cian, has a short introduction saying that these don't count as part of continuity. I've read elsewhere that a large number of the fanbase loudly disputes this. I count myself among them after what I read elsewhere about the first story and Bob Skir's commentary for the final episode of Beast Machines. The stories in here are: A Meeting Of The Minds; Simon Furman. This takes place during Beast Wars' Third Season. Simon has said elsewhere this is one of his G1-centric ideas he had for BW before the final episode. Collect And Save; Tim Waggoner. A Wreck-Gar/Junkion story. Paddles; Jean Rabe. An unseen new G1 Dinbot. Redemption Center; Alexander B. Potter. A different take on G1 Starscream. Something Robotic This Way Comes; John J. Miller. Takes place during Armada. Two For The Price Of One; Brandie Tarvin. Swindle deals with Carbomia. Joyride; Jenifer A. Ruth. G1 Bumblebee. Lonesome Diesel; David Bischoff. Armada. Prime Spark; Sean P. Fedora. A personal favorite of mine! Quite a rare gathering of Cybertronians. This is a very unique story. Parts; Donald J. Bingle. Takes place during the War Within comics/original G1 pilot. Healers, Fighters And Transformers; J. Steven York. A solo story about Ratchet. Fire in the Dark; John Helfers. An attempt to merge the Armada and BW timelines. Singularity Ablyss; Robert N. Skir. Megatron's point of view during Beast Machine's Spark Of Darkness episode. I was surprised to see how much this book is being sold for online. I guess it had a low print run. After re-reading these stories again recently, I can safely say it's worth the price. You can't go wrong with this book!

Published by Thriftbooks.com User , 13 years ago
While probably not the most sought after Transformers material this book is certainly entertaining. I keep it in my purse for when I get bored. Quite honestly I absolutely love this anthology. It has a great balance of moods in the various stories. From deep, to hardcore, to hilarious (a couple have made me laugh out loud) to just down right weird, there's a story to satisfy every aspect of the Transfan in you. :)

For fans, by fans

Published by Thriftbooks.com User , 15 years ago
I'm so glad I got my hands on this one. While I didn't read every single story, the ones I did read, I absolutely loved. Probably my favorite one was the one where Starscream looses his memory and ends up spending a surprisingly peacefully day with the Autobots. Great character development and inside look into one of the most infames of transformers. I also loved the last story, which retold the Beast Machines episode "Bad Spark" through Megatron's eyes. This book was clearly written by fans who truly know the Transformers universe. I just wish there were some more anthologies like this.

Have a good time.

Published by Thriftbooks.com User , 17 years ago
I read some of the Transformers fiction on the fanfiction on the fan sites, and I gotta say, I'm impressed. So much of the content in this book is what a lot of the older fans crave: an intrspective look into some aspect of a character's life or a moment that made you see something you never thought of before. Sure, the writers are doing this to sell a book, but in the Intro, Cian makes it very clear: These writers are having fun writing this. They're fans, too, and they want to see characters they spent so many sleepless nights perfecting and working with represented as they always wanted people to see how they saw them. Believable.It's this kind of writing that I wish I could see more of. Besides, It's a coupla short reads.

Published by Thriftbooks.com User , 18 years ago
Its a great read! Interesting Little Tales mixed with some FIX's to the G1 and Beast Wars series. Its a great addition to the Transformers fledgling but very good novels. If the Transformers Franchise is to survive Great Novels need to be a huge part of its backbone. Delving into the core charecters is very important for this series, we all know about the Autobots. Some of these stories give us a much needed look behind The Decepticons, especially the High ranking officers. Grab a copy today you wont be disapointed! A+
Trustpilot
Copyright © 2022 Thriftbooks.com Terms of Use | Privacy Policy | Do Not Sell My Personal Information | Cookie Preferences | Accessibility Statement
ThriftBooks® and the ThriftBooks® logo are registered trademarks of Thrift Books Global, LLC