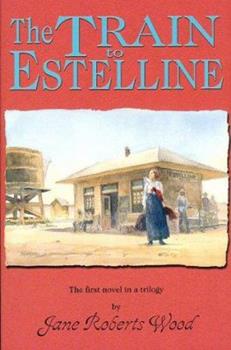 The Train to Estelline

Together for the first time as a classic Texas trilogy: The Train to Estelline A Place Called Sweet Shrub Dance a Little Longer The Lucinda "Lucy" Richards trilogy, spanning the years from 1911 to the 1930s, has everything good books should have: a variety of landscapes, characters of all ages and social classes, an overall tenderness that never lapses into sentimentality, and a sense of the comic amidst the tragic. Lucy is feisty, funny, and completely...

The Train to Estelline

Published by Thriftbooks.com User , 19 years ago
TRAIN TO ESTELLINE is the second Jane Roberts Wood book I read, after A PLACE CALLED SWEET SHRUB. Both are delightful. The letter/diary style of TRAIN chronicles the life of a young woman leaving home to begin her teaching career at the turn of the century. The reader feels like something of a voyeur following events while being privy to the private thoughts of the young woman. It is a charming book which leaves one a little envious of the innocence, the naiveté of Americans living in that period.

Published by Thriftbooks.com User , 20 years ago
Lucinda Richards has accepted the job of teaching in Estelline, Texas though not even 18 years old. She leaves all that is familiar and comfortable and begins a new life in West Texas. The story is conveyed in letters to loved ones back home and diary entries. It details the life of a young woman in 1911, facing the changes that come both in her life, and to the lives of the people she comes to care for and love. It is the details that ring true, the differences in stations in society, the hardships faced by families, and the expectations on a young , single woman. I think this would be a great book for a mother-daughter bookclub to read.

Published by Thriftbooks.com User , 21 years ago
Open the cover of this book and slip into the early part of the past century. A lively 18 year old has adventures no one could quite imagine when she leaves behind her sheltered existence to teach school out in the dust, wind, and sun parched plains of West Texas. For every step taken forward, Lucinda Eliza Richards becomes aware of the detours the must take to get there. Nature and humanity are ruthless and capricious and the plethora of obstacles and hardship is occasionally overwhelming. A very frank and fair look into these lives and times. Well written and honest.

Published by Thriftbooks.com User , 21 years ago
This first book in the trilogy is the only one written in "letters home" form. I found Lucy's character to be real and believable. I could actually picture West Texas in the early 1900's. If you're looking for an action-packed suspense novel, this isn't the book for you. If, however, your goal is simply to spend a Sunday afternoon with a friend, grab this book and a glass of iced tea.

This is a very enjoyable book.

Published by Thriftbooks.com User , 23 years ago
Lucy is a lovable, believable main character that you feel you want to know personally. It reads like an autobiography.
Copyright © 2020 Thriftbooks.com Terms of Use | Privacy Policy | Do Not Sell My Personal Information | Accessibility Statement
ThriftBooks® and the ThriftBooks® logo are registered trademarks of Thrift Books Global, LLC