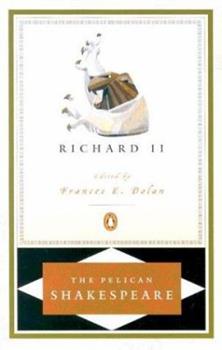 Published by Thriftbooks.com User , 11 years ago
THIS EDITION IS BEAUTIFULLY ORGANIZED... THE FOOTNOTES ARE THOROUGH AND ENGAGING... THE CHARACTERS IN THE PLAY ARE FULLY EXPLAINED... THIS WAS FOR ME A BEAUTIFUL PATHWAY TO A FABULOUS PLAY

Good for a reading group

Published by Thriftbooks.com User , 15 years ago
I ordered a number of copies of this book -- the New Folger Library edition of Richard II -- for use by members of a Shakespeare reaeding group in Tbilisi, Georgia (that's the country, not the state), most of whose members are not native speakers of English. For this purpose the Foger edition, with notes on the page facing each page of text, was very useful -- more useful, I think, than the Arden edition, whose critical apparatus is very copious but often gets in the way. And in a few cases I found the Folger's notes more accurate and informative. Harry Berger's concluding essay, however, is not so good. It argues a thesis that I find somewhat implausible and one-sided in its reading of the play, so especially for the new student it is not very useful. But coming at the end of the text it is easy to ignore.

Published by Thriftbooks.com User , 18 years ago
richard ii chronicles the events that began the so-called war of the roses, the 14th century civil war between two branches of the royal family. it focuses on the usurpation of the crown by henry bolingbroke (later henry iv). in snatching the crown from his cousin richard, henry 'leapt over' the legitimate heir, his teenage nephew. thence began the internicine feud. historically, the play is pretty accurate. richard is portrayed as a feckless, flamboyant man who believed he had a divine right to rule and forgot that his earthly powers rested on the support of his followers, who he abused and neglected. the play does focus on richard's personality, and he gets a lot of nice lines, but it also focuses on the plotting and scheming that makes this period such an intersting one. richard ii is the first part of shakspeare's history tetralogy that continues in henry the iv, parts 1 and 2, and concludes in henry v. all are well worth reading.

Published by Thriftbooks.com User , 22 years ago
The Penguin production of Richard II is full length and well done. The other version(s) are abridged and not so good. I find it increases understanding and satisfaction of Shakespeare to listen to the tapes while reading.

Published by Thriftbooks.com User , 23 years ago
Yes, Mr or Ms Reader, this is a hidden gem of Shakespeare's. Perhaps it is a bit too weighed down with history to ever attract Mr Di Caprio, but the story is intriguing and one's opinion of Richard changes scene by scene. Wonderful wordplay and nobility in abundance make this one to turn too immediately should you wish to delve beyond the traditional canon of the Bard's works.
Copyright © 2020 Thriftbooks.com Terms of Use | Privacy Policy | Do Not Sell My Personal Information | Accessibility Statement
ThriftBooks® and the ThriftBooks® logo are registered trademarks of Thrift Books Global, LLC