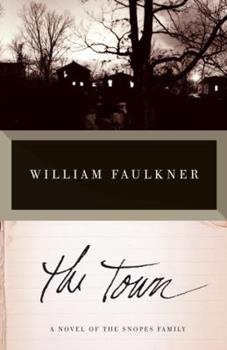 (Book #2 in the The Snopes Trilogy Series)

This is the second volume of Faulkner's trilogy about the Snopes family, his symbol for the grasping, destructive element in the post-bellum South. Like its predecessor, The Hamlet , and its successor, The Mansion, The Town is completely self-contained, but it gains resonance from being read with the other two. The story of Flem Snopes's ruthless struggle to take over the town of Jefferson, Mississippi, the book is rich in typically Faulknerian episodes...

Published by Thriftbooks.com User , 14 years ago
County Attorney Gavin Stevens and his relationships with Eula and Linda Snopes provide the centerpiece for this rambling, reconstructed narrative of the rise of the ignoble Snopes clan in the Town of Jefferson, Mississippi. The narration comes through the viewpoints of Stevens, his younger nephew Charles Mallison, and sewing machine salesman and all-round busybody V.K. Ratliffe. Stevens' rivalry with Mayor De Spain dominates the first section of the book, and shows how irrationally an educated man can behave when he is blinded by desire; any reader with an ounce of sensitivity will surely squirm at Faulkner's skill in combining drama and farce here. Later Stevens turns his attention to "saving" Eula's daughter Linda from a life of "Snopesdom" and continues making a fool of himself in the process. All the while, the inscrutable Flem Snopes continues on the acquisitive path he established in the first volume, The Hamlet, now setting his sights firmly on De Spain's bank. Can the sympathetic lawyer save Linda, or even himself? Faulkner's Yoknapatawpha County novels are among the best that American literature has to offer, and the Snopes trilogy is certainly no exception. Jefferson is populated with unforgettable characters, including (besides the above-mentioned) the many additions to the vermin-like Snopes clan - Eck, Montgomery Ward, I.O., and Wallstreet Panic Snopes. Some of these characters will turn up in other Faulkner novels as well, and collectively the books enrich each other, building up a depth of shared experience. Although Faulkner's focus is on men, and his women are often either absent or troublesome, this volume's focus on obsessive relationships makes this a fine selection for women readers as well - much more so than the horse-trading of The Hamlet, for example. And while this isn't the Master's very best work, it still easily rates 5 stars.

Published by Thriftbooks.com User , 15 years ago
This is the middle book of the Snopes trilogy, and it seems like Faulkner has significantly changed his perception of the Snopeses. The Town and the Mansion were written much later than the Hamlet, and it's clear that they're written by a more complex person. It seems that the Jefferson of The Hamlet has an idealized honor that is being stolen away by the invasion of the amoral Snopeses. However, by the Town, the honor held by the locals is shown to be largely in their own opinion. We do see something slipping away, but it's not altogether clear that it's worth preserving. The shift makes for a much more interesting book. Additionally, there's the maturation of Eula Varner, something beautiful in the South if not altogether pristine, and she is lost in this middle section of the trilogy. Her suicide says something about the South's willfull destruction, the outgrowth of a deal with the devil, but it takes some further mulling to fully absorb her. There are three first person narrators guiding the reader through the news of The Town. Unfortunately, one of them, Charles Mallison, is an enormous yawn. Faulkner is usually fantastic with the first person children (Sound and the Fury, The Unvanquished), but his heart isn't in this one. Fortunately, the others are much more interesting and make the novel fly. Gavin Stevens is similar to father Compson in Sound and the Fury, and I believe one of the mouthpieces for Faulkner himself. The Snopes trilogy is interesting in that it shows the maturation of a writer and the deepening complexity of his views. This trilogy didn't end up in the vein in which it was started, and that's a very good thing. Not my favorite Faulkner, but ambitious as hell, and that's the real reason to read him in the first place. When he pulls it off, there's nobody better. If you're already hooked on him, the trilogy is worth doing, unlike Sanctuary and Pylon, which are just downright miserable (regardless of what Sartre had to say about them, the putz).

the snopes' come to town

Published by Thriftbooks.com User , 16 years ago
'the town" is the second book in a trilogy written by faulkner on the snopes family. the 1st and second books were written almost 25 years apart. it is strongly suggested that you read the 1st in the series, "the hamlet", first. in this book faulkner brings the infamous flem snopes from frenchmen's bend to the city of jefferson and traces his steps up the social ladder from superintendent to president of the local bank. The story is told thru the eyes of three characters ranging in age from a child to an older adult. the story deals with the thwarted lover of eula snopes, gavin stevens who attempts to free eula's daughter from the shadow of snopes name. as usual, Faulkner finds ways to make the story telling interesting. He does so by having the tale told by two "observers" and one participant. The youngest, charles mallison, tells what he sees and what he hears occurred before he was born as told top him by his cousin gowan. He is given the task of speaking for the town and his perspective is objective and not tainted by personal feelings. Gavin stevens and v k Ratliff on the other hand speak only from their personal perspective. Faulkner takes the opportunity to use each of their differing points of view to leave open a debate as to what motivates flem. As usual, we never see into flem and can only speculate like stevens and Ratliff on why he does what he does. What we do see is flem ridding the town of the baser elements of his own family while he attemps to raise his own moral and social standing. He uses and destroys everyone around him to get what he wants. At the end, he is all alone.

An entertaining chronicle of a self-made man

Published by Thriftbooks.com User , 20 years ago
The Town is the second volume of Faulkner's Snopes trilogy, picking up the story from the moment of Flem Snopes's arrival in Jefferson, Mississippi. With the foundation firmly laid in The Hamlet, Faulkner is free to delve deep into the character of Flem, the volatile Snopes-Varner dynamic, and the fascinating interaction between Eula, Gavin Stevens, and Linda Snopes, the pawn in her father's plan to take over Jefferson. Not surprisingly, another host of Snopes parade onto the scene; but it is Flem and his underhanded, diabolical shenanigans that make this novel a joy to read. The ending is both humorous and seriously disturbing, paving the way for the Fall of the House of Snopes in The Mansion. One note: while the book jacket claims The Town may be read on its own, I would highly discourage it; trek through The Hamlet first before launching into it--it is well worth your time.

Sequel is not equal, but still a great piece of literature

Published by Thriftbooks.com User , 22 years ago
Faulkner's literary reputation and legacy was cemented by the time this sequeal to The Hamlet appeared. He had also written all of his important works and was loosing his "touch", writing sequels to his more famous works and light weight nostalgic pieces (i.e. The Reivers). All in all this is still an important examination of the south, filled with the humor and horror that was Faulkner's trademark. Anyone interested in his body of work will have to read it at least once.
Trustpilot
Copyright © 2022 Thriftbooks.com Terms of Use | Privacy Policy | Do Not Sell My Personal Information | Accessibility Statement
ThriftBooks® and the ThriftBooks® logo are registered trademarks of Thrift Books Global, LLC