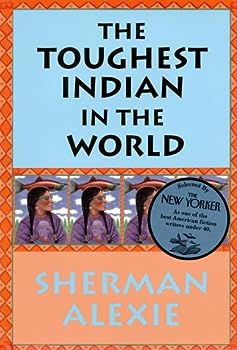 The Toughest Indian in the World

This description may be from another edition of this product. Photographic guide to the breeding birds and common migrant birds of Puerto Rico and the Virgin Islands

Published by Thriftbooks.com User , 16 years ago
Man, everytime I read Alexie, I am reminded just HOW MUCH I love his work. When not actively reading him, I am aware that I think he is a brilliant author, but it seems that I must be in the act of devouring his words in order to become fully aware of the depths of my feelings. This is an AMAZING collection of short stories. Vignettes are where I think Alexie shines brightest, so that is a good thing. (Both his poetry and fiction are great, don't get me wrong, and "The Lone Ranger and Tonto Fistfight in Heaven" was a great blend of inter-connected vignettes (much like Sandra Cisneros's "House on Mango Street")). The title story blew my mind. This was a stunningly beautiful collection of stories. In the beginning I was a bit thrown off by some of the frank and unexpected sexual goings-on, but not for too long. Starting halfway through the book, with "The Sin Eaters" I felt that the stories began to be better than in the beginning. They were always good, but with "The Sin Eaters" and especially by "Indian Country" they were AMAZING!! The last four stories in this collection are some of the best writing I've ever read. *contented sigh* Just gorgeous and so powerful. (some of the observations about anthropologists and Collegiate responses/teachings to/about Native Americans were spot on and very amusing/cutting).

Stories that make you think.

Published by Thriftbooks.com User , 20 years ago
Sherman Alexie's narratives in "The Toughest Indian in the World" combine the author's matter-of-fact, understated style with his edgy humor, irony and passion. The result is a collection of short stories (with numerous subplots) which will always make you think, sometimes make you laugh, and sometimes make you get angry. Alexie's heroes come from different tribes and all walks of life, but whether they themselves like it or not, they are all Indian - not: "Native American." ("You ain't Indian," the Spokane father of a Spokane student thrown out of class over the question "What is an Indian?" tells his son's mixed-race professor in "One Good Man." "No. You might be a Native American but you sure as hell ain't Indian.") Not all of these stories are light fare - "The Sin Eaters," which reflects on the darkest chapters of American Indian history, is strongly reminiscent of Huxley's "Brave New World." (Not recommended reading before you go to bed, at least if you have a vivid imagination.) But whether hilariously funny or dead-serious, you will not be able to put them down until you've read the very last page - and you will be sorry when you have. Also recommended: Smoke Signals The Lone Ranger and Tonto Fistfight in Heaven

Published by Thriftbooks.com User , 21 years ago
The writing here is absolutely breathtaking. I couldn't stop thinking about the characters long after I'd finished it. The man who holds up the International House of Pancakes, the fighter in the bar, the washed up basketball player trying to find his place in the world...there were so many times that I felt astonished and truly awed by the writing. My favorite story was certainly the first one, but they are all strong, insightful and most of all moving stories. I have read only one other story from I believe another collection and I only regret that it's taken me so long to discover Alexie's work.

Published by Thriftbooks.com User , 21 years ago
Alexie's latest book is very good. The longest story, The Sin Eaters, didn't quite come together for me, but most everything else is extremely readable. These works have a strong sense of the Northwest in them, especially the Spokane Indian reservation Alexie grew up on. They're hardly provincial, though, embracing varieties of character, place, and theme. The characters are usually Indian, often from the Spokane tribe, but also from many other tribes. Sometimes, one wishes Alexie didn't feel it necessary to repeat phrases so often, but his skills are too superior for that to be anything but a minor hitch. There's a great deal of imagination, and an awful lot of strength, behind his best stories: One Good Man, for example, is an elegant, blunt and elegaic image of a Spokane and his dying father. The wonder is at his ability to, in about a decade, produce so many books at a consistently high quality. He's gone from his roots as a very personal chronicler of his native people to, in this collection, an analysis of a failing marriage involving a Microsoft plebian, without hesitation. His writing could use some improvements, but he's still just in his early 30s, and already at the highest literary levels. With impressive consistency, this book gathers up deeply interesting characters, puts them on the page, and demands that we pay attention to them. And indeed, it is the vigorous, blemished, unheroic and occasionally violent characters of Alexie's work who represent his greatest skill. His sparse and blunt style concentrates on character and plot: Metaphor and imagery are secondary concerns. In summary: buy this book, buy his other books, and plan on buying the books he'll write in the future.
Copyright © 2020 Thriftbooks.com Terms of Use | Privacy Policy | Do Not Sell My Personal Information | Accessibility Statement
ThriftBooks® and the ThriftBooks® logo are registered trademarks of Thrift Books Global, LLC