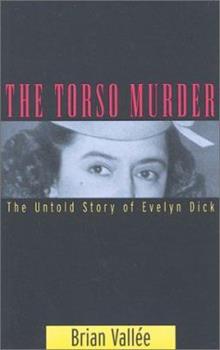 A fresh and fascinating look at the Evelyn Dick murder trial and the intriguing mystery of her disappearance. The "torso" murder trial of young attractive Evelyn Dick grabbed headlines in 1946 and 1947. Her husband John's head and limbs had been sawed from his body and burned up in her furnace. After she was sentenced to hang, up-and-coming lawyer J.J. Robinette appealed her case, won her a new trial and then an acquittal. But, when police found the...

A must for True Crime Fans

Published by Thriftbooks.com User , 14 years ago
I stumbled across this book while looking for something about The Lipstick Killer of Chicago, William Heirens. He, too, is believed to have dismembered at least one victim during his reign of terror from 1945-1946 in Chicago. (His culpability in the crimes is also circumstantial.) Instead, I found this book about the John Dick murder/mutilation in Hamilton, Ontario, Canada in 1946. I had never heard of this case before, and it is still the only account I have read of it yet. But this book has made me want more. From the Prologue, I was intrigued. Vallee is such an interesting writer. His words and phrases are crafted for mood, clarity, and objectivity. He leads the reader through this small Canadian town; through the lives of these seemingly ordinary, if not strange, groups of people. It is still as salacious a story as when the news initially broke in those early days of March 1946. John Dick, an immigrant man who recently married, is missing. His employer is the only one who seems concerned, while his wife and her family continue to engage in some strange behavior. Her deepest concern is that he still owes her money, while her father's sole concern is that no police should be called to his daughter's house. As the investigation unfolds, we find a string of love affairs, a dead infant, shoddy police work, and some criminal masterminds. Love, murder, money, greed--all seem to be personified by the enigmatic Evelyn Dick. Is she guilty... or just a victim? Brian Vallee takes an even handed approach to this complex story. He takes account of nearly every side and every issue. The story itself is fascinating, and as was stated by one contributor, better than any work of fiction. For all the titillating details, Vallee constantly reminds his readers of the gruesome crimes that made these people infamous. His compassion and objectivity do allow him to come up with his own conclusions about the crimes, ending the work beautifully. Highly recommend!

Published by Thriftbooks.com User , 19 years ago
If you've seen the movie, or know of the case, this book provides some interesting information. It is relatively well-written, contains pictures, and is easy to read. I recommend it.
Trustpilot
Copyright © 2022 Thriftbooks.com Terms of Use | Privacy Policy | Do Not Sell or Share My Personal Information | Accessibility Statement
ThriftBooks® and the ThriftBooks® logo are registered trademarks of Thrift Books Global, LLC