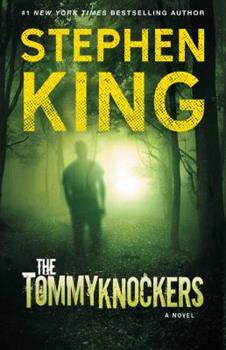 Master storyteller Stephen King presents the classic, terrifying #1 New York Times bestseller about a terrifying otherworldly discovery and the effects it has a on a small town. "Late last night and the night before, Tommyknockers, Tommyknockers, knocking at the door..." On a beautiful June day, while walking deep in the woods on her property in Haven, Maine, Bobbi Anderson quite literally stumbles over her own destiny and that of the entire town...

Published by Topher , 5 months ago
This novel is apparently infamous for being Kings worse novel. The first 400 pages really drug for me, the last 200 were fairly good. Story line was interesting enough, but the delivery wasn’t there for me. I’m not one to walk away from a novel I’ve started, but I was very tempted.

Published by Thriftbooks.com User , 4 years ago
I love this book, but I didn't get the cover I ordered. I wanted the mass market paperback with the mint green border instead I got the one that looks more like the movie cover.

This is the best of King

Published by Thriftbooks.com User , 14 years ago
I love all of King's books and always get so involved in the stories and characters that I think about them long after I finish reading them, like they are real people. Jim Gardener, Bobby and especially her sister will stay on my mind for a long time. I'm not even sure why, but these people seemed more real than the ones I know in real life. The story enthralled me, even though I am not into anything si-fi or relating to outer space. But that is King for you. He will draw you in, no matter what the subject matter, and make you a believer. This is his best book, and I have read all his books. It doesn't get any better than this.

A book for people of a certain age.

Published by Thriftbooks.com User , 15 years ago
I am about the same age as Stephen King and have read his works throughout my adult life. I think most readers are too young to appreciate this book. Stephen King's early works, assembelled in chronological order, are all symbolic stories of stages in his own life. "Carrie" is about high school, "Salem's Lot" about love and loss in early adulthood, "The Shining" about the anxieties of fatherhood. "It" is about the reworking of childhood issues in mid-life. All great fiction talks to us on a subconcious level. "Tommy Knockers" is about aging and death. Time possesses and mutates all of us, makes our teeth and hair fall out, truncates our dreams, makes us unrecognizable from our youthful selves. This is a sad book, and unlike King's earlier works the protagonists have no power to fight such an enemy. Affirming the value of love, however futile, in the face of death is the point of the book.

Published by Thriftbooks.com User , 20 years ago
I think that this book is a true milestone in King's work, something you can not compare to his literary landmarks like "It", "The Stand", "Insomnia", "Hearts in Atlantis", "Bag of Bones" (I could go on like this for a whole load of more titles, because there are so many of really good books by King but it's close - let's leave it at that. First of all, I have to express a certain feeling of shock, because there are so many reviews that just do not do this book any justice. Second, there are lot of positive reviews, although - they are well-written, I read some of them - they are much too long. I too have a tendency to get short things long (see?), but I want to stick to my main concerns this time!A lot of people will try to convince you of the contrary, but this book is ORIGINAL. In a way, this story is originality itself. Or have you ever heard of a western novelist who stumbles across the edge of an alien space-ship while taking her dog out through the woods? This may sound a bit cynic - at least it does to me -, but it is a very good beginning, the first sentences already are something worth of mental achievement. I like too recall certain passages from this book from time to time, while I realize that I have to read it again soon. To put it in a nut-shell: the plot is a thrilling heart-jolter, the language is alive and very strong, maybe not as strong as it has been in "It", but still very healthy, the characters start to caputre yourself, pulling you deep into their lives, letting you witness the pure horror that splits their silent world apart. The Tommyknockers is, beside the well-done writing job and the absolutely gripping story, a tale told in old-fashioned Stephen Kingish: first, there WAS the quiet small-town with its quiet inhabitants, THEN there IS the horror ... and when I say horror, Johnny, I m-e-a-n HORROR!

Published by Thriftbooks.com User , 21 years ago
Tommyknockers has to be one of Kings GREATEST Books of all time. Where do I even begin? I love Bobbi and especially the endearing alcholic writer "Gard". The townspeople are great. The alien takeover is realistic and so so creepy. A spooky "discovery" in the woods, mysterious inventions, and a talking plastic Jesus combine to make this absolutley AWESOME. I can't say enough great things about it!

A Fun Read From An Entertaining Writer!

Published by Thriftbooks.com User , 21 years ago
Who hasn't heard of Stephen King? Not many people right? But what do people think when you say his name? "Oh, he's just too scary for me!" An unfortunate misconception that keeps many hardcore book readers away from King's writings. So here is a story that isn't too scary that might interest people into checking out his work. It's a little sci-fi, a little horror, a little mystery all wrapped up in one big package! Stephen King is more of a writer of the sinister, the possibility of treachery and maddness in each of us. A true sense of horror, of that slight jolt of electricity that for a second makes you just want to drop the book, really wasn't present here. But there sure were some cool ideas! The way people pay for new found abilities with the blood of the not-so innocent was a somewhat humorous twist in this book (all though I did start to feel kinda weird at some of the stuff I found myself laughing at). That is one of Stephen King's greatest achievements in his writing, his ability to take something that in any real circumstance would be deemed a great and terrible misfortune and make his audience laugh (maybe more appropriate to say snicker, somewhat devilishly)at these unexpected turn of events! For the most part Mr. King doesn't fail to entertain his massively loyal audience, and The Tommyknockers is no exception. If you haven't read it yet and you are not particularly a Stephen King fan go check it out at your library, it can't hurt. If you do call yourself a Stephen King fan and you haven't read this book yet, well shame on you!

The Tommyknockers Mentions in Our Blog