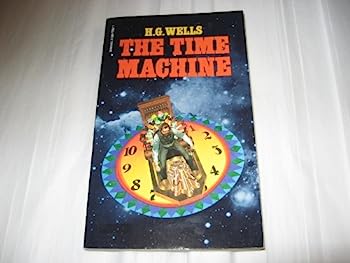 by H.G. Wells and S.B Wells

This description may be from another edition of this product. When the Time Traveller courageously stepped out of his machine for the first time, he found himself in the year 802,700--and everything had changed. In this unfamiliar, utopian age creatures seemed...

Published by Jacket.books , 1 year ago
Truly, a fantastic piece of science fiction! Once you start reading it you won't want to stop. Wells prose flows so smoothly and the pacing of the story keeps you gripped the whole time.

Don Quixote is our favorite book!

Published by Ramon Sanchez , 2 years ago
Very good book every member of house enjoyed.
Published by Thriftbooks.com User , 3 years ago
I paid$4 for my copy and they send me a $3 thrift edition

Wind yourself 100+ yrs back to get the context and then be prepared to...

Published by Thriftbooks.com User , 11 years ago
travel 800,000+ yrs in to the future and back. This book is the story of a nineteen century time traveler who travels some 800,000 odd yrs into the future and contrary to his expectations of a progressive civilization he notices one in its decadency, i.e. in the "twilight of humanity". Humanity, he notices, has evolved into two distinct races; one that lives an idyllic, vegetarian, carefree life and appeared to him as unintelligent and androgynous (evolved from the aristocratic class of his times), and a subterranean race that preys on the former (evolved from the working class). In some sense, what the time traveler notices is already here; you can see it coming to play in certain prosperous regions of the world with decadency setting in; or, perhaps, the morlocks are going to be the machines that increasingly control our lives, (the GPS in our car and the like) without which we are starting to lose our bearings even in our own neighborhood. The copy I have is the Simon and Schuster one which has certain helpful notes and interpretations towards the end.

Published by Thriftbooks.com User , 12 years ago
This is an excellent critical edition of the initial edition of the Time Machine by Leon Stover. Most reprints of the Time Machine and other of Wells' SF novels typically use later revisions. Stover argues effectively for the greater artistic merit of the initial editions. It is part of a series of extensively annotated editions of Wells' science fiction. The editor also has a lengthy introduction which discusses the context and ideas permeating each novel. Stover makes good use of previous studies while also providing his own illuminating analyses. What I like is that Stover keeps close to what Wells wrote and said in his various books and recorded conversations rather than spinning some personal take on the novel. Please do not confuse this with a typical reprint of the Time Machine or any of his other sf novels. It is much more. Serious readers of HG Wells should get the series.

The epic tale of all time

Published by Thriftbooks.com User , 13 years ago
H G Wells has awakened the world with his art of tale through the travel of time. He is the inspiration of every time travel writer in existence today, with no exception, myself included. Along with great classics like Twenty-thousand Leagues Under the Sea, I remember the first time reading these classics. I was in awe. Though time travel, a genre given life by H G Wells is the ultimate epic sci-fi adventure. The very idea of time travel has opened the eyes of every imagination in my soul. The ramifications are endless. H G Well's Time Machine is my favorite, all time story. Even when you think of how the future looked as grim as it did thousands of years from the story line's origination, one only needs to remember that this tale is merely one possiblity of billions that could be changed with a simple act of maybe a push of a button or even less. I believe THAT was the message Wells was revealing to us all. This is a very well written story that I highly recommend to anyone of any age or time. This very book was my biggest inspiration since I was first able to read.

I saw the movie first. The book difference was a surprise.

Published by Thriftbooks.com User , 14 years ago
An unnamed time traveler sees the future of man (802,701 A.D.) and then the inevitable future of the world. He tells his tale in detail. I grew up on the Rod Taylor /George Pal movie. When I started the book I expected it to be slightly different with a tad more complexity as with most book/movie relationships. I was surprised to find the reason for the breakup of species (Morlock and Eloi) was class Vs atomic (in later movie versions it was political). I could live with that but to find that some little pink thing replaced Yvette Mimieux was too munch. After al the surprises we can look at the story as unique in its time, first published in 1895, yet the message is timeless. The writing and timing could not have been better. And the ending was certainly appropriate for the world that he describes. Possibly if the story were written today the species division would be based on eugenics. The Time Machine Starring: Yvette Mimieux

The Future Is here

Published by Thriftbooks.com User , 24 years ago
"I drew a breath, set my teeth, gripped the starting lever with both hands..." Time traveling? Has the thought ever popped into your mind? I'm sure it has, but have you ever thought about it so much, that you wrote a book about it? That's what H. G. Wells has done. In his book, The Time Machine, he has searched his imagination and beyond to bring you excitement. After the time traveler worked many years on his odd-looking creation, he decided to start experimenting with it. In about five minutes, he had already gotten himself into trouble... Dazed and confused, he got out of his time machine, and started to explore his new world. He saw many strange creatures. Most of them fled at the sight of him, but one, was curious. It seemed that she liked the time traveler. He named her Weena, and described her as speaking a strange language, three feet tall, and having short legs. After he discovered his new land with his new companion, he went back to his time machine to find it missing! In my opinion, this book is for children, teens, and adults. Some of the weaknesses of this book are, 1st Wells doesn't describe things in his story too well, and 2nd , he dwells on some things that are not important, and doesn't talk about the things that are important too much. Some of it's strengths are, it's imaginative characters. Other books by H. G. Wells include When The Sleeper Wakes, and The First Men on the Moon. -Jason DiVener

The Time Machine Mentions in Our Blog