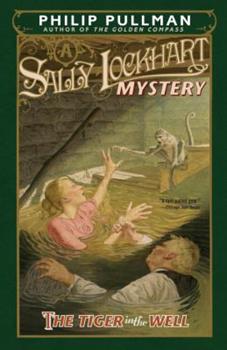 The Tiger in the Well: A Sally Lockhart Mystery

(Book #3 in the Sally Lockhart Series)

UNLIKE MOST VICTORIAN women, Sally is completely independent, with her own successful business and a comfortable home for her young daughter, Harriet. But Sally's whole world is about to collapse. A stranger emerges, claiming to be both her husband and Harriet's father and threatening all that she has.

Published by Thriftbooks.com User , 20 years ago
I notice that Pullman's Sally Lockhart Trilogy are all rated 'Young Adult'. Who made that dumb decision? Pullman is eminently readable by anyone from 10 to 100 (and I should know, because I'm about halfway between the two!). Put simply - no matter what age you are, if you read just ONE Philip Pullman book, you'll be totally hooked. He has the rare ability to draw his readers into his story-telling right from the first pages, and he doesn't let go of you until he's finished spinning his yarn. He doesn't exactly attack you, but he sure has a mean way with words, that will leave a firm grip on your throat for a long while after the final page has been turned.He also has an exquisite command of characterization. Not for Pullman the weak, wishy-washy characters. His positively jump off the page at you and drag you into their world of Victorian London. There's something of Dickens in Pullman's stuff. The good guys are very good and the bad guys are very bad. But that makes it sound trite and clichéd - which it isn't. It's much more complex than that, which probably explains why Philip Pullman is one of the few authors from this side of The Big Pond, who succeeds on that side of The Big Pond.The Sally Lockhart trilogy is on my list of 'Books you MUST read before you die'. And since I'm no longer a Young Adult, I've made sure to read them quickly!

Satisfying conclusion to an excellent trilogy

Published by Thriftbooks.com User , 20 years ago
We start the story with Sally living happily in the country, with her friends and her daughter, and everything is wonderful. Then she falls into a nightmare - someone, claiming to be her husband, wants custody of her daughter. Who hates Sally so much that he wants to destroy her utterly, and steal her daughter?This is a really gripping story with no loose ends. Sally goes on a journey through the underside of Victorian London, ending up in Spitalfields. I used to live in this area, and loved reading the way that Pullman brought its history to life. The baddies are very bad, and get their comeuppance. The finale is worthy of a Hollywood action movie.I came to these books after reading The Golden Compass and The Subtle Knife. The Sally Lockhart trilogy has none of the fantasy aspects of these books - it's set firmly in gritty, dirty Victorian England. The stories are simpler, so the books would be easier for a younger reader. Sally is a real role model heroine for a young girl - she never gives up, and is very smart and brave.For the older reader, the attractions are the quality of the stories (except perhaps for the middle book), and the excellent descriptions of life in Victorian England. These stories rattle along at a fast pace, with plot twists coming from the baddies trying to outwit Sally and her friends. Sally ends up in the Victorian underworld, and the portrayal of street gangs, and the lives they lead, is very believable. A nice piece of social history. Highly recommended.

Published by Thriftbooks.com User , 21 years ago
This book did a pretty good job of tying up all of the loose ends Pullman left with "Ruby in the Smoke" and "Shadow in the North". The only problem I have with this whole trilogy is one that many Pullman fans share: what about Sally's real mother? Anyway, at the beginning, you're almost as outraged as Sally ("This can happen in England? ")when she finds out that some stranger is trying to take away her precious Harriet in a custody lawsuit. You watch, enraged, as she tries to handle the problem herself as her dimwit lawyer simply "spreads his hands and tries to look mature" instead of helping her; and she only gets herself into more trouble. Finally, at the end of her rope with her sexist barristers and Parrish, whoever he is, Sally goes into hiding, eventually sinking to London's East End, packing her toddler daughter Harriet around with her. It's mentioned in both "Ruby in the Smoke" and "Shadow in the North" that Sally is a firm capitalist . . . until she sees what life is like on the less fortunate side of the fence. She meets a woman who's missionary-turned-doctor who's made it her mission to cleanse the East End of poor health circumstances; Miss Robinson, who runs a shelter and crusades against stingy landlords who enforce awful living conditions, and Daniel Goldberg, a Hungarian socialist willing to help Sally in ways that no one else can. The polt takes inummerable twists and turns and you begin to find out what really happened to Ah Ling that night on the docks . . . Read this book. Although it is not my favorite out of the Sally Lockhart trilogy (Shadow in the North is, though this one comes in a close second) it's just as wonderful as it's predecessors.

Published by Thriftbooks.com User , 22 years ago
After reading the Golden Compass and Subtle Knife I knew I would have to read more by him while waiting for the end of His Dark Materials trilogy. Once I got past the first three chapters of The Ruby in the Smoke I was hooked, and although The Shadow in the North broke my heart and made no one seem indivisable, the Tiger in the Well tied almost* everything up. I'd like to say that I never put the book down, but I can't. I was just a little too enraged at the beginning ( you understand if you read the series ), but once you get to chapter 20 ( the second book ) you better have time cause there is simply no place to put it down. The ultimate climax though was in the last ten chapters ( the third book ) and you get the feeling that the other books ( meaning Ruby in the Smoke and Shadow of the North ) were just an intro, and this is the only real story. I highly suggest this and I must say that the coversation between Con, Tony, and the Officer in I think the last chapter ( Rabbits ) is the absolute funniest I've ever read. Funny, exciting, with, romance, and drama the absolute best.*The Tin Princess
Copyright © 2020 Thriftbooks.com Terms of Use | Privacy Policy | Do Not Sell My Personal Information | Accessibility Statement
ThriftBooks® and the ThriftBooks® logo are registered trademarks of Thrift Books Global, LLC