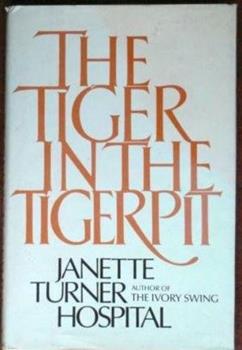 Tiger in the Tiger Pit

This description may be from another edition of this product. No Marketing Blurb

Published by Thriftbooks.com User , 17 years ago
This may be the best Hospital I've read. The title is from a line by T. S. Eliot and describes the patriarch of a family, Edward Carpenter, a retired school principal. The novel is set in a small town in Massachusetts around 1990 (though written in 1983)when Edward's wife is planning their fiftieth wedding anniversary party. She will invite of course, in addition to friends and former colleagues, their three children; Victoria, who is in a mental institution; Jason, a therapist in New York and Emily, a concert violinist living in England, along with her eight year old son Adam, whom her father Edward has never seen and didn't know existed until three years ago when Emily gave her first concert in the United States. The novel is all about families: how easily we as family members hurt each other; what happens when we don't forgive one other; the awfulness of hypocrisy; how we can redeem ourselves; that we can never really know our parents; that though we travel far away, we never get far from where we came; the roads not taken, lost opportunities; and, finally, that we never stop wanting to be loved by our family. The plot has many unexpected twists, and there are many beautifully written, powerful scenes. In Chapter XIII Edward and Elizabeth travel to New York to hear Emily give her first concert in the U. S. This is one of the most moving passages I have read anywhere in a long time. I read and reread and read it yet again. Great fiction doesn't get better than this.

Another great one by Hospital

Published by Thriftbooks.com User , 24 years ago
I'm a fan so I think all hers are great (though her short stories don't inspire as much). When you finish you'll sit back and say "can you believe that?!" Surprise ending teaches that in life things may not always be what you think. The family dynamics and descriptions are so vivid you feel as if you have been injected with emotion
Copyright © 2020 Thriftbooks.com Terms of Use | Privacy Policy | Do Not Sell My Personal Information | Accessibility Statement
ThriftBooks® and the ThriftBooks® logo are registered trademarks of Thrift Books Global, LLC