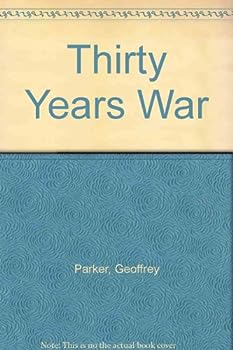 This description may be from another edition of this product. The first edition of The Thirty Years' War offered an unrivalled survey of a central period in European history. Drawing on a huge body of source material from different languages and countries...

An excellent place to start

Published by Thriftbooks.com User , 17 years ago
The Thirty Years' War was a very confusing conflict on many levels, and to attempt any account of it in barely 200 pages is almost foolhardy. But this book succeeds, at least in setting the stage and following the people and politics. It is a good place to start a study of the conflict. It is not a military history (there is a brief account of some specifically military aspects toward the end) nor a social history, and a great deal of detail had to be left out. But the basics of the war are there, which can be fleshed out with more extensive or specialist works.

Published by Thriftbooks.com User , 19 years ago
Geoffrey Parker is excellent as usual, providing in-depth insight and an engaging style. Novices to the topic might also wish to consult his "Europe in Crisis" or "Dutch Revolt" texts. It's difficult to find a good and unbiased investigation into the Catholic/Habsburg side elsewhere. The "one star" review is a gross misjudgement - it goes without saying that a book of this type may be too complex for someone with no experience at all with the seventeenth century, but a history can't spend all of its time on explanatory hand-holding. As for stylistic criticism, it's difficult to find history as good as Parker's written as well, let alone better. If Parker is too "complex," "boring" or "complicated," it is likely that the topic simply will not be of interest to you no matter who writes it. A 50 page chapter in a textbook is only a meaningless gloss.

Good, But Not In Isolation

Published by Thriftbooks.com User , 20 years ago
Geoffrey Parker is quite simply one of the most thoughtful and talented military historians out there. His works are always profound and thought-provoking. However, in this instance, he may have bitten off more than he can chew. The ugly fact is that the Thirty Years' War is a conflict of incredible complexity. No one book can capture all elements of this war. It is quite simply the historian's Gordian Knot, and even Parker cannot do it all in one book.The bottom line? If you are a military historian, this is a very good book. However, Parker's own "The Military Revolution" and Dodge's classic biography of Gustavus Adolphus (really a history of European military tactics from 1600-1712) do the job better, especially as compliments to one another. For a political history, Ronald Asch does a better job in his history of the Thirty Years' War from the Hapsburg perspective(especially when combined with the Dodge book on Gustavus). In contrast, Parker's political history gets buried beneath too much detail (thereby running the risk of missing the forest for the trees).Folks, don't let the complexity of the Thirty Years' War scare you. It is a fascinating conflict, one that is essential to understanding European history, military evolution and the emergence of the modern state. If you've got the stomach to read two or more books on the subject, you will be richly rewarded. Taken in conjunction with other works, Parker's book can add enormously to one's understanding of a seminal event in world history.

An Invaluable Overview without Simplification

Published by Thriftbooks.com User , 20 years ago
Geoffrey Parker can have one epitaph: concise. A lot of information is packed into this edited history of the 30 Years War. The reader may feel that he or she is not getting the full treatment, but it is all there. Of significant note and contribution is the exposure of the many facets of cause and continuation of the war; religion played a key role, but the war gave birth to national identities that eventual consumed confessional politics. A lot of attention is given to on the surface "irrational" behavior by generals and potentates, and this is the first place I've seen an objective perspective from both sides during the first decade of decision. This makes a great case study for analyzing grand and military strategy. Tactics and operations are not ignored, but rather they figure into their proper place. It was intrigue and financial systems that determined the outcome, not decisive battles or campaigns. There is a unique aberation, though. The section entitled "Total War" doesn't give much on totality in the modern sense that we think of total war. Particularly since the last section tells how France could not wage anything but small war until the 1640s.Despite that, the reader gets the sense of the true scope of conflict: from the Iberian peninsula to the fringe of the Ottoman Empire; from south of the Alps to the northern reaches of Sweden. The war was not just a German affair, nor did it result in just a German solution.

This is an exallent book on The Thirty Years War.

Published by Thriftbooks.com User , 22 years ago
This book is an exallent book on The Thirty Years War. It begins its narative in 1608 to show some of the background of the War. The Thirty Years War was an very complex war; Mr. Parker tries to examine the War from all of the sides invovled. He doesn't take any side. The two drawbacks of the book are that it is written by a number of different authors and is a bit choppy because of this. The other drawback is that it is quite terse. Each major incedent is described in in a brief and acurate way. In order to understand the book, one has to either read it very carefully or read the book a number of times. While the main focus of the book is the political incedents, there is an appendix which discusses the major military changes that occured in the War.
Copyright © 2020 Thriftbooks.com Terms of Use | Privacy Policy | Do Not Sell My Personal Information | Accessibility Statement
ThriftBooks® and the ThriftBooks® logo are registered trademarks of Thrift Books Global, LLC