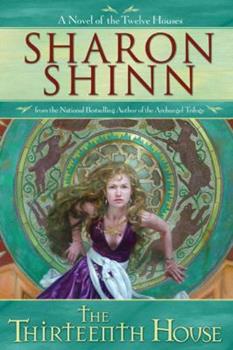 The epic tale of Gillengaria begun in Mystic and Rider continues as a beautiful shapeshifter discovers that intrigue and danger can be found even in the safest of havens.

Published by Thriftbooks.com User , 12 years ago
Book 2 of the Twelve Houses, The Thirteenth House delivers on all levels. My only complaint is that the series needs to be read in sequence to be truly appreciated. The back stories for the characters make them come alive and you find yourself caring about what happenes to them. I have become a fan of Sharon Shinn and have started searching for her earlier works.

Published by Thriftbooks.com User , 13 years ago
A very well written book. This book had action from the start. It grips an an does not let go I read this book in a little over two days I could not put it down. I am now on book 3 dark moon defender. Sharon Shinn is a very talented writer. She made reading fun for me again. I would suggest this book to anyone that is a casual reader or a an avid reader. You will not be sorry if you purchase this book or any in the series. I do rec amend reading rider and mystic to start or you might be a little lost...But overall great book.

A Royal Progression of Parties and Assaults

Published by Thriftbooks.com User , 14 years ago
The Thirteenth House (2006) is the second fantasy novel in the Twelve Houses series, following Mystic and Rider. In the previous volume, Senneth, Kirra, Tayse, Justin, Donnal, and Cammon left the south and journeyed to Ghosenhall to report to the King. After presenting their report, the group broke up and went their separate ways. Queen Valri offered Cammon the use of a garden for the raelynx and visited the creature herself, even taking control of its mind for a while. The next day, Senneth took Cammon into the city to meet Jerril and Cammon agreed to spend some time learning from the mystic. Then Senneth met with the King and received the assignment of guarding the royal princess. The King also asked Senneth to visit her brothers and suggested that she might wish to take a King's Rider with her. Senneth knew that the King was teasing her, but that he also was signaling his acceptance of her relationship with Tayse. That evening, Tayse and Senneth met outside the palace and he pledged to go wherever she went. In this novel, Romar Brendyn -- the man selected as regnant for the king's daughter -- is abducted and taken to an almost deserted house on the edge of the Tilt domains. One of his escorts escapes and returns to Ghosenhall, reporting the kidnapping to King Baryn. Kirra, Donnal, Cammon and Justin are sent out to rescue the regnant. Once in the isolated house, Kirra shapeshifts and visits the cell where Romar is held. She shapechanges some furnishings into useful escape tools. She also changes bars on the windows into weak wooden rods. That night Romar breaks the rods, slithers down the rope and runs to the rendezvous in nearby woods. He is startled when Donnal -- in wolf form -- escorts him to the others, but doesn't slow down his pace. When Romar reaches the rescuers, he quickly mounts the spare horse and they gallop away. Close to Merrenstow, the party encounters an armed group of Romar's retainers looking for him. They hand off Romar to his own men and prepare to leave. Romar doesn't want Kirra to travel with such a small escort, but she insists. In this story, Kirra and Donnal return to Danan Hall in Danalustrous for her sister Casserah's coming of age party. Before the party, her father Malcolm tells Kirra that he is designating Casserah as his heir. Since Kirra is the eldest child, she is puzzled and hurt for a moment, but then realizes that her acceptance of becoming the heir is due only to her sense of responsibility. Like her mother, Kirra would much rather be free to wander as she pleases and soon wholeheartedly agrees with her father. Casserah is very much like her father. She has his landsense and is dedicated to the domain. She has always been reluctant to leave home for any reason, but now she should make herself known to the lords of other domains. Malcolm and Kirra encourage her to attend the upcoming circuit of seasonal balls, but Casserah flatly refuses. Instead, they agree that Kirra will atten

This is another installment in a solidly enjoyable series.

Published by Thriftbooks.com User , 15 years ago
Kirra Danalustrous, a seemingly flighty noblewoman of one of the Twelve great Houses of the kingdom of Gillengaria, is actually much more than she seems. It's known she is a Mystic, one of the distrusted magic-users, but her powerful father protects her. What isn't known is that she is a restless spirit, unhappy with the social round of the nobility. She expends her energy working for the King--such as finding and rescuing the Regent the King has appointed to aid his only daughter if the King should die. The Regent, Romar Brendyn, a close friend of the King, has been kidnapped by unknown malcontents--probably members of a Thirteenth House, or the minor nobility. Kirra, with her close friend/servant, Donal, are both shape-changers. With their acting and magical abilities--and accompanied by some helpful guardsmen, they are able to find and free the Regent. Kirra finds herself strongly attracted to Romar. They meet again on her second mission--this time for her father and her sister, the Heir to Danalustrous, as she makes the social rounds disguised as her sister (her sister has refused to leave their House's Domain). There Kirra is involved in further plots of Romar's life and more treachery against the king, bringing her back into the close company of the Riders and the Mystics she met and befriended in the previous book--while she confronts her attraction to a man who cannot be hers.

Published by Thriftbooks.com User , 15 years ago
On Lord Tilt's land, shape-shifter Kirra Danalustrous with the help of her odd companions successfully stop three nobles from either killing or bartering Lord Romar Brendyn the Regent. Following that escapade she returns home only to learn that her family disowned her "title" for coveting a married man, Lord Romar, but also lovingly welcome her back. Her younger half-sister Casserah has the title mantle, but does not want it as she does not wish to attend the summer parties hosted by Gillengaria's Twelve Houses; to not attend is a nasty insult. Kirra and Casserah "switch" places as the former shape shifts to look exactly like her younger sibling. Kirra disguised as her sister attends the Twelve Houses' galas though her motive besides helping Casserah is to learn more about the nobles' plot to overthrow King Baryn and to protect the Queen and her daughter also on the circuit. Kirra never anticipated that she and her beloved would end up as "guests" of the occupants of THE THIRTEENTH HOUSE. The second Twelve Houses fantasy (see MYSTIC AND RIDER) is a delightful tale that grips fans from the moment that Kirra forces an invitation to stay at Tilt's home and never slows down even when the lovers berate themselves for their unacceptable feelings. The action-packed story line is fast-paced starting with the rescue and never slows down as the royalist supporter Kirra shapeshifted into Casserah makes the rounds of the festivities. Though the villains seems underdeveloped especially in comparison to the lovebirds, epic fantasy readers will appreciate Sharon Shinn' stupendous story. Harriet Klausner
Copyright © 2020 Thriftbooks.com Terms of Use | Privacy Policy | Do Not Sell My Personal Information | Accessibility Statement
ThriftBooks® and the ThriftBooks® logo are registered trademarks of Thrift Books Global, LLC