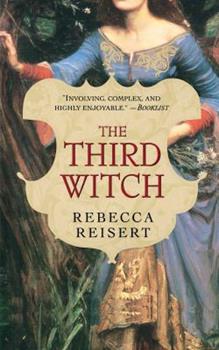 In this stirring debut novel, Rebecca Reisert enters the world of Shakespeare's Macbeth, in which a young woman's search for vengeance plunges her into a legendary tale of deceit, murder, and retribution.... I have made my life an arrow, and His heart is my home. I have made my life a blade, and His heart is my sheath....So pledges Gilly, vowing to destroy Macbeth, the most powerful man in medieval Scotland. She escapes from the hut in Birnam Wood...

Published by Thriftbooks.com User , 19 years ago
Told from the viewpoint of one of the three witches in Shakespeare's MacBeth, this is a historical fiction story told almost completely in the 1st person. The story sides more with Shakespeare than it does true history, but that doesn't effect the flow. Gilly is a young teenage girl, hellbent on revenge. Her only desire in life is to kill Macbeth, and she makes many mistakes because she is so one-sighted in this. No matter how she tries to convince herself she's incapable of feeling, her true nature keeps appearing. She disguises herself as a boy and works as a kitchen scullery in order to get closer to Macbeth, which is when her life, and her plans, take a real turn. While wise in many ways, the flipside shows her immaturity in so many others.There's a nice little bit in the back for book clubs, as well as a brief interview with the author. If you like historical fiction or Shakespeare's Macbeth, you'll enjoy this.

The fascinating "other side" of one of my favorite plays

Published by Thriftbooks.com User , 20 years ago
First of all, I love _Macbeth_. (I'm about the only person I know who feels that way, but I do. ) Needless to say, when I discovered _The Third Witch_ , the story of one of the three Weird Sisters, during an aimless ramble through a bookstore, I snapped it up immediately. When I got home, I started reading right away, and didn't put the book down until I had finished itm well into the wee hours. I really, really like this. The witch of the title is Gilly, an emotionally wounded teenage girl, whose world was ravaged by Lord Macbeth when she was a child. Orphaned, Gilly was raised by the eccentric herb-women Nettle and Mad Helga, considered by the local townspeople to be witches. Gilly, feeling like she has finally grown up and needs to seek her destiny, tries to enlist her guardians' help in revenging herself upon Macbeth. To bring Macbeth down, Gilly needs to know more about him, and so she disguises herself as a boy and goes to work in the lord's kitchens. She initially focuses on her quest for vengeance to the exclusion of all else, leaving hurt feelings in her wake, but eventually she begins to care for others. This disturbs her; such weakness can only sabotage her mission. Will Gilly learn that there is more to life than revenge? Reisert says that she sacrificed historical accuracy in favor of faithfulness to Shakespeare's play. Frankly, I never noticed any anachronisms. This is a good historical novel, as far as I can tell, filled with realistic detail about kitchens, herbs, warfare, and what-have-you. Add a pleasant but unobtrusive dash of feminism, and you get a darn good book.

A FAMILIAR STORY FROM A DIFFERENT POINT OF VIEW

Published by Thriftbooks.com User , 20 years ago
Rebecca Reisert's retelling of the story of Macbeth from the point of view of one of the three witches is an interesting approach to this familiar tale - and one that breathes quite a bit of life into a story that many readers, having it thrust upon them as `required reading' in Shakespeare's version, should find refreshing. The author, in her note at the end of the novel, mentions that she realized early on in her research that she could either be faithful to history or to Shakespeare, but not to both. She chose the playwright as her touchstone, and her writing skills have drawn nicely upon the Bard's immortal sense of drama to produce a very entertaining, readable and absorbing book.The `third witch' of the title is a young girl named Gilly - raised as a foundling by two older women who live in a hut in the forest. They have a great knowledge of nature - of the animals that live in the forest, as well as the medicinal (and other) uses of the herbs and plants that grow there - and are viewed with more than a little suspicion by the peasants who live nearby. Suspected witches are not tolerated well in mediæval Scotland - and for their own safety, they keep a low profile - but from time to time the villagers, desperate to care for or to cure their loved ones, seek them out for assistance.Gilly narrates the novel - and her burning need for revenge against `Him' is made known to the reader right away, and often. `He' turns out to be Lord Macbeth himself - and her reasons for the deep hatred that fills her and drives her on what she sees as her life's mission to bring about not only his downfall, but his death, are revealed deftly, and in due course. I won't spoil anything for any potential readers by going into them here. Suffice to say that she is determined and dedicated to such an extent that it frightens the two other women with whom she dwells.Her adventures in attempting to accomplish this end make up the bulk of the book - and the author's writing skills, as well as her research, make the experience a very involving one for the reader. Gilly is of an age that is a difficult time for any young person to bear - and the burden of her quest doesn't make it any easier for her to grow from a child into a young woman. She disguises herself as a boy for much of the story - and without becoming a feminist treatise, the novel subtly allows her to make some very relevant discoveries about the treatment of women in her society. She also comes to discover many things about herself - the rejection that she has felt for emotion (especially that of love for others, which she considers a hindrance) comes to be seen by her in a very different manner by the story's end.The concept of the novel interested me when I first read about it - and I'll admit that I was a little leery of how well it could be done - but I have to say that I was thoroughly entertained and pleased with the work.

Published by Thriftbooks.com User , 20 years ago
Although there were times I wished this wasn't quite so dark, I found this book to be extremely enjoyable. This is a great first novel & I look forward to more from this author!

Liked The Mists of Avalon? You'll love this.

Published by Thriftbooks.com User , 21 years ago
I loved the book. I am not very familiar with Macbeth (besides the bubble/trouble part) but the book stands on its own. It was engaging and I was able to really feel the depth of the characters and their surroundings. It's always fascinating to look at events, real or imagined, from the other side of "right."Much like The Mists of Avalon (one of my favorite books) this book gives plausible explanations for "magical" events. It also depicts these witches in a sympathetic light. It gives reasons for behaviors that are strange to others and why they were driven in one way or another. I'm a Unitarian Universalist but have pagan/Wiccan friends and have studied and experienced some of their rituals and theology. It is definitely not a Wiccan book, but I believe it will sit well with those who practice pagan rituals and beliefs. I shared it with one of my Wiccan friends. He also liked the book. I will definitely look forward to more books by Rebecca Reisert.
Trustpilot
Copyright © 2022 Thriftbooks.com Terms of Use | Privacy Policy | Do Not Sell My Personal Information | Cookie Preferences | Accessibility Statement
ThriftBooks® and the ThriftBooks® logo are registered trademarks of Thrift Books Global, LLC