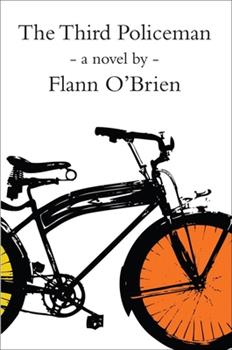 The Third Policeman is Flann O'Brien's brilliantly dark comic novel about the nature of time, death, and existence. Told by a narrator who has committed a botched robbery and brutal murder, the novel follows him and his adventures in a two-dimensional police station where, through the theories of the scientist/philosopher de Selby, he is introduced to "Atomic Theory" and its relation to bicycles, the existence of eternity (which turns out to be just...

Published by Thriftbooks.com User , 16 years ago
A lot of interest has sparked about this novel, which I read six years a ago, now that the novel showed up in the hatch on a Lost episode. Don't worry. Reading the novel won't ruin the plot of Lost or give you definitive details. What the novel will do is give you an allegory that may parallel Lost. The allegory is the following: An inept young man with no moral backbone allows himself to be persuaded by a devilish man to kill someone for money. After the crime, the ninny finds himself quite lost in a world that is no longer recognizable to him. He starts to ask himself, like the cast of Lost, "Where the heck am I?" It appears in fact he is suffering perdition for his crime and he must go through life in a hellish repitition for which there seems to be no end. That this book was inserted by the Lost writers into their show attests to how sophisticated their influences are for a TV program that is quite unusual for being so popular while at the same time being "literary," visionary, and highly original.

Published by Thriftbooks.com User , 17 years ago
No point in going to great lengths to describe the plot of this most brilliant and hysterical novel, "The Third Policeman," as that ground has been thoroughly tramped over by others on this page. Leave me just confess that this book will alternately have you laughing so hard you will be forced to put it down or risk suffocation, and will then propel your innocent little mind through the roof of your house. Reading this book is like taking acid, then watching Mony Python perform the works of Albert Einstein wearing English police uniforms. And speaking of Monty Python, after a few passages of this book you will realize where all the English satirical groups of the 20th century got their material. And when you're done laundering the pants you have soiled through uncontrolled laughing, you will gasp in intellectual astonishment at the enormity and profundity of O'Brien's logic. Flann O'Brien is a flat-out genius of language and satire. You should really do yourself a favor and read his other books as well: "At Swim-Two-Birds," "The Hard Life," "The Poor Mouth," and "The Dalkey Archive." Say no more. A pint of plain is your only man.

Published by Thriftbooks.com User , 22 years ago
This is one of the strangest novels I have ever read. It was written in about 1940, but not published until 1967, a year or two after the author`s death. O`Brien is a pseudonym for the Irish writer Brian O`Nolan, who was also a celebrated newspaper columnist using the name Myles na gCopaleen, the latter name apparently Gaelic. O`Brien`s other masterpiece is At Swim-Two-Birds, which was published in 1939. His "Myles" columns is also well-regarded, and such novels as The Poor Mouth and The Hard Life are well worth reading. The Third Policeman is quite funny, quite absurd, and, at bottom, very disturbing. The narrator is a very unpleasant man, who announces in the first sentence "Not everybody knows how I killed old Phillip Mathers, smashing his jaw in with my spade;" not only is he a murderer, but a very lazy man who ruins his family farm, and spends his life researching the works of a madman named De Selby, who believes that, among other things, darkness is an hallucination, the result of accretions of black air. The narrator relates his early life briefly, leading up to his association with another unsavory character, John Divney, who parasitically moves in with the narrator and helps squander his inheritance. Divney and the narrator plot to kill their neighbor, Phillip Mathers, to steal his money. After the murder they decide to leave the money for a while until the coast clears: however they distrust each other so much that they never leave each others company. Finally they go to Mathers`s house to fetch the strongbox with his money: then Divney sends the narrator ahead to the house alone, while he stands lookout, and things get very strange!The narrator meets Phillip Mathers, acquires a sort of soul which he calls "Joe", and sets out looking for three mysterious policemen. The first two are easily found, and the narrator discusses bicycles, boxes, and other unusual subjects with these policemen. Finally they decide to hang him (for bicycle theft, I think), but he is rescued by the league of one-legged men (the narrator himself has but one leg). He returns to Mathers` house where he encounters the third policemen, and eventually is reunited with John Divney.The above summary, obviously, does not represent the action or interest of the book at all. The book is full of off-the-wall philosophical speculations, some based on the mad works of De Selby, others original to the policeman (the latter including a theory about bicycles and their riders which has to be read to be appreciated, also a mysterious trip to an underground cavern where anything you can imagine can be created). There are a lot of footnotes discussing De Selby and the controversy surrounding his work: these make the book somewhat reminiscent of Pale Fire by Vladimir Nabokov (also reminiscent in being the first-person narrative of an insane murderer).Wholly original, blackly funny, brilliantly written. A wonderful book.

The joy of our Flann

Published by Thriftbooks.com User , 23 years ago
Undoubtedly one of the finest books I have ever read, a sentiment echoed by the several people I distributed the book to after reading it myself. After a relatively straightforward opening chapter the plot just takes off, leaving you asking yourself what the hell is going on. The atomic theory, DeSelby, bicycles - it's hard to believe this book is a product of pre-war Ireland. And it ends well too. A book that you will want to tell your friends about in the pub. By the way, the Poor Mouth is great too, although it's aimed much more directly at an Irish audience.
Trustpilot
Copyright © 2022 Thriftbooks.com Terms of Use | Privacy Policy | Do Not Sell or Share My Personal Information | Accessibility Statement
ThriftBooks® and the ThriftBooks® logo are registered trademarks of Thrift Books Global, LLC