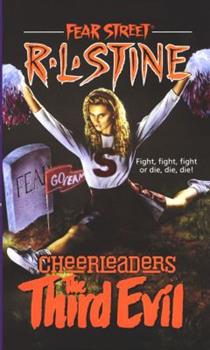 This description may be from another edition of this product. Tormented by dreams of her dead sister Bobbi, and by a series of gruesome events, Corky knows that it is up to her to learn the century-old secret that is tearing her world apart

The Evil Is Still Alive!

Published by Thriftbooks.com User , 16 years ago
This time Corky Corcoran, Kimmy Bass, Debra Kern and Ronnie Mitchell visit a cheerleading camp. Their cheerleading camp is so creepy because the evil is still alive. Wow!. I can't believe Corky was possesd here. Will she die?.

Published by Thriftbooks.com User , 17 years ago
Another work of art by R.L. Stine. This book is about a young girl named Corky recovering a tragic accident of the death of both her sister and her boyfriend by an evil killing them and taking over her friends' bodies. She goes to a cheerleading camp only to find out the evil, so evil to say, overtakes her body. If you are an R.L. Stine reader...you know,your in for the third evil twist.

Published by Thriftbooks.com User , 19 years ago
This story is one of the best!It was the first one I read ,which I regret, but I still loved it ! All the competition, Corky acusing her friend of having the evil inside her, her friend going with Hannah, thinking nobody liked her, all the strange things going on at the cheerleading camp!It is full of suspense!It was one of Stines greatest books!

Don't Read This One After Dark!

Published by Thriftbooks.com User , 23 years ago
Cheerleaders The Third Evil was one of the best in the series. After that one you definately would'nt want to be a cheerleader.

The Evil is still here!

Published by Thriftbooks.com User , 24 years ago
Corky thought that she had finally destroyed the evil that had killed so many, including her sister, Bobbi, but when the terror continues, even stronger, and more terrifying than before, Corky realizes that she must stop this evil, but what Corky doesn't realize, is that the evil may be closer than she ever thought, maybe too close, for comfort. One of R.L. Stines best, It keeps you reading until the book is done, an edge of your seat thrill ride that doesn't stop to let anyone else on, or anyone off.
Copyright © 2020 Thriftbooks.com Terms of Use | Privacy Policy | Do Not Sell My Personal Information | Accessibility Statement
ThriftBooks® and the ThriftBooks® logo are registered trademarks of Thrift Books Global, LLC