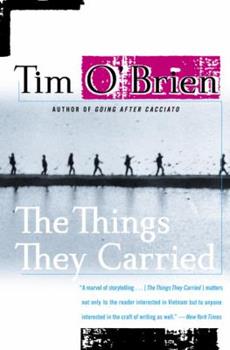 The Things They Carried

One of the first questions people ask about The Things They Carried is this: Is it a novel, or a collection of short stories? The title page refers to the book simply as "a work of fiction," defying the conscientious reader's need to categorize this masterpiece. It is both: a collection of interrelated short pieces which ultimately reads with the dramatic force and tension of a novel. Yet each one of the twenty-two short pieces is written with such...

Published by Shannon/Shawn , 8 months ago
I and my whole English class in high school had to read this book for an assignment. Though I don't remember much about it at that time, I still own the book, and I have to say, very vivid and it really opens your eyes to the horrors that is war, and Vietnam/Cold War era times as well. As someone who loves the history subject, I feel it was very important and great we had to read this in school to get us to better understand the sacrifices made by these brave men, and they still need so much appreciation today.

The Things they Carried

Published by Elena , 8 months ago
got recommended this website by a friend as knowing I love book shopping. The book was as described. I got the book because I needed it for a school reading as from hearing well about it. This was my first time ordering from here and will again!

Published by book nerd , 1 year ago
The book really describes the life of going through Veitnam and the soldiers hardships. The stories are all over the place. Its both keeps the reader on its toes but also annoyingly fast pace at times.

I don't love war books, but I *loved* this book.

Published by Gnicchee , 1 year ago
I'd almost forgotten about this book until I saw it here and thought, "Ooh, I need to tell them to read this!" The things they carried is a fantastic story, so very well told. Do yourself a favor and spend a few evenings with these guys; you'll be glad you did.

Published by Kitty , 1 year ago
I didn’t like this book at all felt like the writer was all over the place when he was wrote this which then made it hard to read. Not very impressed, wouldn’t recommend.

Published by Jen (Marty) Daugherty , 2 years ago
My father served in Vietnam, he has never spoke of his experience to anyone other than my mother on very rare occasions. I wanted to better understand what he went though as a way to feel closer to him out of respect. This book has definitely helped me to achieve that. Tim O’Brien captures the readers attention in a way that makes you feel like you were there. You can literally FEEL everything as you read- fear, heartache, anger, love and loyalty.

Published by Thriftbooks.com User , 16 years ago
There is certainly no shortage of war-related fiction in the world, but Tim O'Brien's masterful story collection "The Things They Carried" quickly sets itself apart as one of the best. The titular story, which opens the collection, is breathtaking and grounded (I first discovered it as an excerpt in "The Best American Short Stories of the Century" and was so intrigued that I had to read the rest). "The Things They Carried" is especially good because it puts an interesting twist on the genre by blending reality and fiction into a mesmerizing combination of compelling action and human nature at work. O'Brien plays with the truth, teasing out the reason behind the writer and then flipping what you thought you knew. He has a firm grip on how -- and why -- people tell stories and uses it well. His description of his compatriots in the war and the behavior they engage in can be shocking but O'Brien's flawless execution keeps them grounded. Each character is well-drawn and well reasoned; even when they do something disturbing you really feel for them because you understand WHY they are acting that way. And if something bad happens to one of them you feel the intense gravity and sorrow of the loss. O'Brien also offers a compelling look at why he became a writer and has some truly inspiring views about the power of fiction -- and storytelling in general. O'Brien's stories are funny, brutal, uplifting, and shocking (often all on the same page). This collection is a must not just for fans of war literature but for anyone.

Published by Thriftbooks.com User , 21 years ago
Tim O'Brien's "The Things They Carried" is a book that transcends the genre of war fiction. Actually, it transcends the genre of fiction in general. Although labeled "a work of fiction" on the title page, the book really combines aspects of memoir, novel, and short story collection. I think you could use Audre Lorde's term "biomythography" to describe this book.The first-person narrator of this book (named, like the author, Tim O'Brien) is a writer and combat veteran of the Vietnam War. The book actually deals with events before and after the war, in addition to depicting the war itself; the time span covers more than 30 years in the lives of O'Brien and his fellow soldiers."The Things They Carried" is an intensely "writerly" text. By that I mean that O'Brien and his characters often reflect directly on the activities of storytelling and writing. As a reader, I got the sense that I was being invited into the very process by which the book was created. This is an extraordinary technique, and O'Brien pulls it off brilliantly.This being a war story, there are some truly disturbing, graphic, and violent scenes. But there are also scenes that are haunting, funny, surreal, or ironic. O'Brien depicts a memorable group of soldiers: the guilt-wracked Lieut. Cross; Kiowa, a Native American and devout, Bible-carrying Baptist; the sadistic but playful Azar; and more.While this book is a complete and cohesive work of art, many of its component stories could stand alone as independent pieces of literature (in fact, I first encountered the title story in an anthology). But however you classify it, I consider "The Things They Carried" to be a profoundly moving masterpiece.

Published by Thriftbooks.com User , 21 years ago
I was first introduced to this book as part of a U.S. & Vietnam History course in college. The other novel the course required was The Quiet American by Graham Greene. Tim O'Brien's book is every bit as good as Greene's, and all the more timely.As a former soldier, and a veteran of Desert Storm, whose father avoided the draft during the Vietnam War, the book taught me that no matter what other people say about the war, no matter what I learn, I can never make any value judgements on an individual level. I was not there, and for better or worse, I am only a specator.I am currently re-reading the book, which I often use in teaching my creative writing class. I share the story-chapter, "Style" every year with my students. I also find the book essential to learn about the nature of fiction, which O'Brien challenges with every page of this book.For anyone looking for a book to read on the Vietnam experience, this book makes my short list every time. Not only of "Vietnam" books, but of any book worth reading. This book is simply essential.

Published by Thriftbooks.com User , 22 years ago
I was born in 1969. I missed Vietnam. The war was over and I never knew about it. For an event that had such significance in American history, it was as though it had never happened.When I was in High School and we studied American History, our class always ended with WWII. We never discussed "modern" events -- the 60s, the Vietnam War, the Civil Rights movement.When I got to college, I made a point of taking a class on the 60s. Still though, I gained a textbook introduction to the Vietnam war -- I never had a true sense of what the horror was, why people protested, why it was such an important historical event. My generation has never faced a war in which we were drafted to fight.And then I read "The Things they Carried"...This book was/is an education for me. Visceral, haunting, provoking, gripping -- the stories Tim O'Brien tells rip into you. He puts you on the front line facing the man you just killed -- on the Canadian border deciding that you aren't brave enough to escape to Canada to avoid the draft -- back in Vietnam watching your best buddy slowly sink into a field of mud as sniper fire rains all around you -- back at home with no sense of purpose surrounded by people who don't know how to welcome you home.This book is the best education on Vietnam this literal child of the 60s ever received.If, like me, you don't understand what all the fuss is about, read this book and you will...

The Things They Carried Mentions in Our Blog 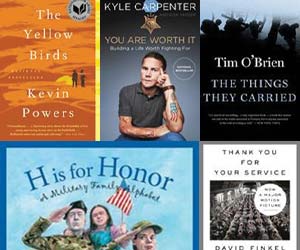