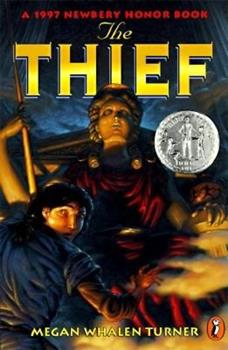 (Book #1 in the The Queen's Thief Series)

Discover and rediscover the world of the Queen's Thief, from the acclaimed novel The Thief to the thrilling, twenty-years-in-the-making conclusion, The Return of the Thief. The epic novels set in the... This description may be from another edition of this product.

Published by Maddie , 7 months ago
This book was soooo slow to start out. The first 200 pages were describing a long and boring journey. There was a twist at the end but it wasn’t big enough to make up for the rest of the book’s blandness. Wouldn’t really recommend.

Published by Anon , 7 months ago
I paid more for this book because I wanted a hardcover that was in great condition. However, it's an old library book with stamps all over it, the cover has been cut with scissors and the binding is falling apart. So very disappointed. This book's condition is acceptable at best, and that's being generous.

Not the Same Cover

Published by Sandy , 11 months ago
I love the book and my daughter asked for the whole series. I specifically ordered this copy ( and paid more than I would otherwise) because I liked the look of the cover best, but the book that was delivered had the old original looking cover. It doesn't match at all with the other books unfortunately.

I can see why it won an award

Published by EdenAnn , 1 year ago
I stayed up all night to finish it. It's a ya book, but as an adult, I enjoy well written ya. Sometimes it's hard to find a book that isn't kind of dumbed down and stuck on certain predictable tropes. This book blew me away.

A book of a Thief's Story

Published by Landon , 1 year ago
A lovely writing style that will keep the reader engaged with a easy read yet gripping all the same. This story is of a thief's writings in first person, who is ambitious of making a name for himself in the glory of Fame and Fortune which drives him . Starting the plot of him locked away in a prison for his bragging of stealing from the king, Gen is forced upon a quest with four others to use his skills to steal a stone that as far as anybody knows exist only in myth. If he runs away he'll be hunted for the rest of his life, if he succeeds he will then be crowned The Kings Thief. There's a decent depth for all the characters by the Thiefs own firsthand accounts, along his trip. Some sad moments, a big surprise and a decently written ending, I think its a good transition to the next of this series which I've not read. I'd say I'm a little disappointed how much the book spent on the time of there travel but it was needed to give the characters depth. Unlikely events occur and I felt the book in whole wrapped together nicely. You will need to read page to page, if you skim for just the gist for some parts you could miss how the ending ties in some of these things. So just read for the enjoyment. Its a book that's easy to imagine scenes of since it's written in first person. ___________________________________________ As for the quality of the book itself, it was ugly and nothing like the black cover art... never the less, I've bought the book for the story not the looks, ill buy the collection from Amazon since I now know its a good book and writer.

Published by Thriftbooks.com User , 17 years ago
It all starts when Gen the thief tells the kingdom of Sounis he can steal anything. To prove himself right he steals the king's seal, and then goes to brag about it in a wineshop. Soon after he is caught and thrown in the dungeon and kept there until the Magus (Sounis's most trusted advisor) wants to use him to steal something. Along with the Magus, his apprentices Ambiades and Sophos, and the soldier Pol, Gen goes on an adventures over the mountains of Eddis to the kingdom of Attolia to steal something that is said to be a myth. The Magus treats Gen like a prized tool, Ambiades treats him like scum, but Gen still manages to add wit to his story that will have you laughing out loud. The book is good enough to read again and again, but the best time is the first time, because of the ending. You probably will never see it coming, and when all is revealed, it seems like the most clever book in the world. There is some minor language, but otherwise this book is good for all ages over 8. Once you read it, don't forget to read the sequel, the Queen of Attolia, which is more for older audiences because it's of a little darker and serious tone. My sisters and I all are avid readers of fantasy, and we have all agreed that The Thief is one of the best books in the world, likely even the best. Don't sit around waiting for Harry Potter 7 twiddling your thumbs (2 years of that would put a strain on your hands); read The Thief!

Published by Thriftbooks.com User , 20 years ago
I'd never heard of THE THIEF or Megan Whalen Turner up until about two months ago, and now I can't understand why not, since I consider myself to be a connosu--okay, well, I can't spell that word. Anyway, my point is that this is book is really 100% awesome, and I don't know how I could not have heard of it earlier. THE THIEF is definitely one of the best books I've ever read, right up there with THE GOLDEN COMPASS and PRIDE & PREJUDICE, and I highly recommend it to anyone and everyone old enough to enjoy an excellent story.It starts out with the thief Gen imprisioned in the dungeouns of Sounis, all as a result of his rash boast of being able to "steal anything." However, he doesn't stay there for all that long before being released by non other than the King's magus. The King of Sounis desperately wants a certain something, and Gen is the only person who would be able to get it, thus doing what many have attempted, but none achieved.That, my friends, is all which I can honorably disclose without letting too much of the cat out of the bag, and you will simply have to read this book for yourself to know how everything turns out. I guarentee you will be quite surprised, as I was, since in this single book Turner proves to be qute adept at twisting plots.Happy reading!

how old is Gen anyway?

Published by Thriftbooks.com User , 22 years ago
One very interesting point about this book, and I admire the author for pulling it off, is that Gen as a character can appeal to a wide variety of ages. Somehow, the author has written Gen in such a way that you can read whatever age onto him that you want. I know people who thought Gen was as young as twelve or thirteen, and others who thought that he was closer to twenty. It's a very interesting tactic, I don't know if it was deliberate on the part of the author, but it certainly increases the possible audience for the book. I know as a child and teen I preferred books with characters my own age, or slightly older, and I don't think this is uncommon. With this book, Gen can be the age of the reader, whether the reader is 12 or 20. Check it out.

Published by Thriftbooks.com User , 22 years ago
I am a student at a school and I don't like reading a lot but I liked the book The Thief. When I started reading it was because I was bord but then I noticed that I was reading it on my spare time when I would play video games or watch T.V. but I read instead. The book got me hooked when I started reading. When you read it seems like you are Gen on the adventure with the magus, Pol, and the other people. This book was so good that I am reading a lot more than I had before. So if you like advetnures you should read this book and be part of the adventure.

One of the best books we've read

Published by Thriftbooks.com User , 23 years ago
What starts as a simple "get out of jail" adventure story evolves into a rich world with stunning landscape, a fascinating pantheon of Gods, and characters who are more than they seem.This book may be challenging for younger readers. I read it aloud to my 8 and 10 year olds, and they loved it, but did not appreciate some of the plot elements. For reading alone, I'd recommend it more for the 12-16 year old set.
Trustpilot
Copyright © 2022 Thriftbooks.com Terms of Use | Privacy Policy | Do Not Sell or Share My Personal Information | Accessibility Statement
ThriftBooks® and the ThriftBooks® logo are registered trademarks of Thrift Books Global, LLC