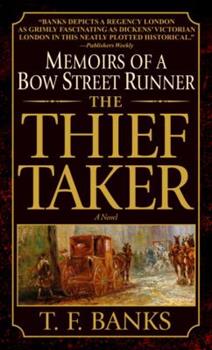 The Thief-Taker: Memoirs of a Bow Street Runner

(Book #1 in the Memoirs of a Bow Street Runner Series)

June 1815. When Henry Morton is called to the scene at Portman House in Claridge Square, the Bow Street constable finds a man dead in a hackney coach--ostensibly of asphyxiation. He was Halbert Glendinning, a gentleman of unsullied character. Then why was he seen frequenting one of London's most notorious dens of iniquity? And why has the driver of the coach vanished into the night? While Sir Nathaniel Conant, the chief magistrate at Number 4 Bow...

It's Not Proust but It's a Good Read

Published by Thriftbooks.com User , 19 years ago
T. F. Banks, who is actually two Canadian fantasists named Sean Russell and Ian Dennis, did a very good job recreating a Regency London that might have been. I think, even if I hadn't read the second novel first and learned their identities, that I would have suspected the author wrote sff for a couple of reasons. First, the ability to bring to life a place that no one now living has ever visited. World building is the term usually used. The touchstone for fiction about the Regency era has been the historical writer Georgette Heyer, but she made infrequent forrays into the seamier side of the Regency world in her novels. Banks while having Morton press his nose up the glass and look wistfully inward at the life style that Heyer described, deals with issues like child prostitution from the Regency viewpoint rather than trying to impose a modern sensibility. His use of Regency cant is effective and not overdone. Second Henry Morton is a hero in the classical sense. In an effort to mock him another Runner refers to him as Sir Galahad, but it's not far from the truth. However, he does have his human foibles-- for instance, setting himself up as a ha'penny gentleman, a wannabe in modern terms, even employing the discarded valet of a nobleman. Sff is one of the few areas of fiction where heroes remain heroic and rarely fall into whining introspection. (Not that I'm against introspection, it's the whining I dislike.)Another thing I really like about this book is Morton's mistress. This is one of the few female characters I have run into recently in any genre novel who has her own concerns and pursues them without regard to the hero's sensibilities. I've deliberately tried to talk about characters and setting because I don't want to give any of the plot away. It is actually two plots that neatly twine together in the end as Morton is hired to kind the killer of a young gentleman and is himself stalked by a ruthless force.This is not a book to inspire Deep Thoughts but it is a book that is entertaining and well repays reading. (Read the sequel, too!)

Published by Thriftbooks.com User , 21 years ago
Historical mysteries seem to be all the rage these days, but this is one of the best I've seen lately. Set in London during the summer of 1815 -- Waterloo summer -- it's the story of Henry Morton, a constable with the king's warrant, working as a semi-independent policeman out of the Magistrate's office at No. 4, Bow Street. I know something about the time and the place, and Banks seems to have made no false steps at all in his depiction of the people of a London which had a very low opinion of professional cops (who worked on commission for each felon hanged). The plot is also very well done, involving several murders, theft of antiquities, and deep corruption among the Runners of Bow Street. The principal characters -- Arabella, the actress with whom Morton has a nonexclusive arrangement, and Lord Arthur Darley, Arabella's other interest, whose open friendliness Morton isn't entirely at ease with, and young Jimmy Presley, who seems likely to make a good Runner himself if he's careful, and Sir Nathaniel Conant, the Chief Magistrate -- are introduced in such a way as to make you look forward to their future interaction. The story does not begin with the beginning of Morton's career, for he makes numerous references to events in his own past, and the author is already at work on the second volume in the series -- which I look forward to reading.

Modern Police at their very beginning

Published by Thriftbooks.com User , 21 years ago
Napoleon is loose on France and Belgium, George III is insane and his son rules as regent, and modern policing is being born. In London, the Bay Street Runners hunt down criminals--and are paid by the catch. It's a perfect setup for corruption. In a London where wealth and squallor live side-by-side, the police are held in contempt by everyone.Henry Morton is a Bay Street Runner. When his ladyfriend calls on him to inspect a young man who arrives dead at a party, he suspects murder. A local doctor assures everyone that the young man simply drank too much, killing himself. When Morton learns that some of his fellow officers broke up an arranged duel that morning, he begins to suspect that the corruption in Bay Street goes beyond simply taking a few pounds to look the other way.Author T. F. Banks writes an exciting tale of adventure and humanity. Morton is a well developed character and Banks's characterization of the young prostitute Lucy is charming. Although in retrospect a few of the plot twists were a little stretched, at the time I was reading, I didn't notice--I was too caught up in what was going to happen next.A very enjoyable book.I appreciate your 'helpful' vote.

Published by Thriftbooks.com User , 21 years ago
The Bow Street Runners do not, by large, enjoy a very good reputation in history or literature. They are frequently accused of, and portrayed as, individuals that were highly corrupt and self serving, incompetent and stupid. And yet, there probably were Runners who were highly professional, capable, intelligent, honest and decent. And T. F. Banks's new novel, "The Thief Taker: Memoirs of a Bow Street Runner" centers on the work and cases of exactly one such runner, Henry Morton, who deplores the fact that Runners have such a bad reputation, even if it is well deserved. He has hopes that by setting a good example himself, he will inspire both confidence in the public for the Runners as to their trustworthiness, as well as encourage his fellow Runners to change their ways and take their chosen profession more seriously. The events that takes place in "The Thief Taker" start off in June of 1815. Even as England waits uneasily for news of the wars from the Continent, life goes on as usual -- dinner parties are still being held, the theatres are still open, robberies and murder are still being perpetrated, and the Runners are still apprehending wrongdoers and bringing them to justice. One evening, Henry Morton is summoned to Portman House in Claridge Square. There, he finds young Halbert Glendinning dead from asphyxiating on his own vomit, according to the doctor at hand. However, Morton is not so sanguine that this is indeed the case. Noticing that the 'good' doctor had not made any kind of examination before rendering his opinion, Morton examines the body carefully, and comes to the conclusion that Gledenning's death was probably murder, and that it was brought about by poison. However, he has a hard time selling this notion to either the magistrates or Glendinning's parents, who want to put the scandal of their son's death behind them without any further fuss.Questions however continue to niggle at Morton. Why for example did the hackney driver who had delivered Glendinning to Portman House take off before he was paid? And why had such a mild mannered gentleman as Glendinning taken part in a duel of honour on the very morning of his death with a notorious duelist? And most perplexing of all, why had Glendinning, a young man of good reputation and unsullied character, visited a tavern known to provide children for 'gentlemen's' pleasure? Fortunately for Morton's peace of mind, Geldenning's fiance, Louisa Hamilton, hires Morton to inquire into Glendenning's death. Morton's inquiries however soon raises the wrath of a powerful and implacable enemy, who decides that Morton has to be dealt with one way or the other. Soon, Morton is battling not only to to discover why Halbert Glendenning of all people was murdered, and by whom, but also to preserve his own life and reputation.I enjoyed "The Thief Taker" very much. While the novel did not take place in the Regency drawing rooms that most of us are familiar with, "The Thief Taker" was, nonetheless, evoca
Trustpilot
Copyright © 2022 Thriftbooks.com Terms of Use | Privacy Policy | Do Not Sell My Personal Information | Cookie Preferences | Accessibility Statement
ThriftBooks® and the ThriftBooks® logo are registered trademarks of Thrift Books Global, LLC