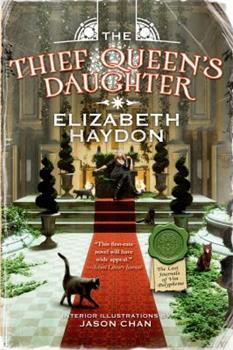 The Thief Queen's Daughter: Book Two of the Lost Journals of Ven Polypheme

(Book #2 in the The Lost Journals of Ven Polypheme Series)

Readers will welcome The Thief Queen's Daughter , the second volume in Elizabeth Haydon's critically-acclaimed The Lost Journals of Ven Polypheme fantasy series for middle grade readers On his first day on the job as Royal Reporter of the land of Serendair, Charles Magnus Ven Polypheme--known as Ven--is sent by King Vandemere on a secret mission within the walls of the Gated City. The king warns Ven to take care--because once you enter the Gated City,...

Elizabeth Hayden has done it again

Published by Thriftbooks.com User , 12 years ago
Wow! This new series for young adult readers had most of the staff at my elementary school lining up to read before the kids got a chance. Excellent characters, exciting plot, you find yourself wanting to know these people. Thank you! I loved Rhapsody, and this is also terrific.

My son loved this book

Published by Thriftbooks.com User , 14 years ago
My son, age 14, didn't put this book down for 2 days. Great book!

appeals to the Harry Potter crowd

Published by Thriftbooks.com User , 14 years ago
Ven Polypheme is fifty years old, but he is a Noin which translates to twelve in human age. He lives on the Island of Serendair in the lodge of Hare Warren located behind the Crossroads Inn where he eats and does odd jobs. He is also the Royal Reporter to the High king Vanemere so when he is called to come to the palace for his first assignment he is excited. The King meets Ven in the garden before taking him to a hidden room where he shows him a special artifact that comes from the Gated City in Kingston, a former penal colony in which the citizens can never leave. He orders Ven to go there accompanied by four friends to learn who sent the artifact and why and what does it mean. When they enter the Gated City, they are immediately dazzled by its glitter, games, and market. However when one of them is stolen, the others must reach the inner city governed by the Thieves Guild. There they are taken prisoner so they must find a way to escape while seeking the person who sent the artifact but the gates are close so they will have to find an alternate means pf leaving. Elizabeth Haydon is a great storyteller whose current work will appeal to the Harry Potter crowd. Her hero Ven is likable and willing to learn which makes him intelligent as he lives in a place where life is cheap. There is lots of action The Thief Queen's Daughter and Ven's curiosity makes him want to learn about the Inner City culture. Not all the people who reside inside the Gated City are evil as some risk their lives to try to help the children as best they can, knowing they will never leave. The villain has a surprising relationship to one of the children leaving the audience with hope that maybe the heroes will survive their ordeal although that is doubtful. Harriet Klausner

Even better than the first, if that's possible

Published by Thriftbooks.com User , 14 years ago
I loved the Floating Island. It was one of the best books of any genre that I have read in a long time, and reminded me of my favorite childhood tomes, with the right amount of magic and adventure, and probably the most likable hero I've encountered. Second books are usually very disappointing, especially when the first is as amazing as that one was, so I was shocked and delighted to discover that The Thief Queen's daughter, which I've awaited anziously since I read the last page of the Floating Island, is even more engagingly magical. This is a series I recommend, as a teacher, parent, and proud perennial kid, to everyone and anyone. There is nothing offensive about it, but the lessons woven artfully into the plot are good ones for anybody to adopt. The characters, especially Felonia the Thief Queen, will stay in your memory long after the last page of this book is done. I am now anxiously awaiting The Dragon's Lair, the next of Ven's adventures. The little trailer for it at the end hooked me immediately.

Her Masjesty: Haydon, is back with the newest installment!

Published by Thriftbooks.com User , 14 years ago
Almost seven years ago, Haydon introduced Rhapsody, whom became a Namer and befriended two half-breeds on the island of Serendair. People all over the world fell in love with the Symphony of Ages, and the series quickly became a World Wide Bestseller! Haydon created memorable characters, like Rhapsody, Grunthor, and Achmed the snake whom traveled to the tree of Sagia and escaped the destruction of the Lost Island of Serendair. In 2006, Haydon introduced a new hero, a new character which we had heard of from Requiem for the Sun, and The Assassin King of the SOA series. Ven Polypheme, the Nain explorer who went on to write: The Book of All Human Knowledge, and All the World's Magic. Which takes place in the Second Age: The Broken World. (Arrival of Man whom dominate as the surpreme beings after the Racian Wars against the F'Dor [demonic fire spirits]). While The Lost Journals of Ven Polypheme are more for the 'Young at Heart,'we can still enjoy Haydon's wonderful skill of creating memorable characters and her wondeful imagination. We don't see a very detailed plot, (of course, this series is for young readers) but we do get to enjoy exploring Serendair more. Since Haydon only showed us Easton and Sagia in Rhapsody. Which is one reason why I bought the book series in the first place, I wanted to learn more about Serendair. But, in the bargain I grew to love Ven Polypheme and his close friends. The Floating Island was a real treat! And the magic in it seemed so more original and familar than the epic Mythical atmosphere in the SOA series. The novel was a nice, easy read and didn't cause me to have a headache afterwards. Nevetheless, if you are over 13 and haven't checked out the SOA series, you should do so. But, anyway back to the real reason why I'm here. The Thief Queen's Daughter brings Ven back to life. The only problem is that, first, The King of Serendair wishes Ven to travel into The Gated City (a place where long ago thieves lived without following the laws and there decendants are not allowed to leave the city) and is a very dangerous place. And two, The King of Serendair fires Ven infront of the entire court (for a reason which you will learn later on) and the Albatross that was always following Ven turns out to be watching him by somebody afar... Ven than journeys into The Thieves Market with his friends, Char, Saeli, Nick, and Clem to find out about a treasure in the Inner Market when he ask Madame Sharra a question, and the Seren reads from The Stolen Deck (dragons scales that appear gray, but turned in the light, reveal there true hue) for Ven, three scales, and Ven finds out three things. One inludes that something will be stolen from him by The Thief Queen herself. So begins the second tale of The Lost Journals of Ven Polypheme. I wish not to spoil anymore than I had. So your going to have to read the book for yourself. This series is a delight, and I'm already looking forward to the next installment (The Dragon's Lair) and Haydon'
Copyright © 2022 Thriftbooks.com Terms of Use | Privacy Policy | Do Not Sell My Personal Information | Accessibility Statement
ThriftBooks® and the ThriftBooks® logo are registered trademarks of Thrift Books Global, LLC