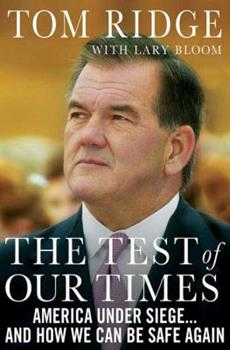 The Test of Our Times: America Under Siege... and How We Can Be Safe Again

by Tom Ridge and Lary Bloom

In this probing and sure-footed memoir, Ridge takes readers through the challenges he faced as head of the Department of Homeland Security, including Anthrax scares and reports--both real and false--of new Al-Qaeda operations sprouting up in the United States.

Not your typical "Political" Book

Published by Thriftbooks.com User , 13 years ago
I would be lying if said I didn't approach this book with some excitement, simply based on the fact that Tom Ridge is a native of my own home town of Erie, Pennsylvania. But I would also mislead you if I said I was anxious to read "yet another one of those kiss and tell Washington politician books" that I was so vehemently expecting with this. Like it or not, here was another politician, out of office, telling it all. It was bound to be a typical story line of political gain, finger pointing and all out boring politics... right? Wrong! Former Governor Ridge held two substantially attended "meet & greet" book signings locally & I knew it would be a plus to not only get my copy signed but somewhat of an honor to speak to the man again after having seen his actions and reactions to what happened to our country on September 11, 2001. His speech was heartfelt & dignified, just as expected, and his ability to be "real" with the crowd was inspiring.. but he was a politician after all.. isn't that what they're best at? However, this didn't mean the book still wasn't going to be one of those kiss & tell, boring, post Washington memoirs that politicians write to make their own quick mark in history; not that Tom Ridge needed to make any other real "mark" after being appointed the first Secretary of Homeland Security post 9/11. He has become somewhat of a household name without the book. I kept my expectations low & somewhat predetermined as to what to expect despite the wonderful appearance at the press releases/book signings locally. I'm not a politically inclined person. I have my views, thoughts, ideas and perspectives on politics and those on politicians, but I'm not one to quickly get into a discussion of what they are or take on a battle of wits regarding political views. I'd be lying to say that my general view on "politicians" themselves is overly kind and loving either. I began the book with a slight predetermined idea that this was going to be a typical kiss and tell political memoir. How intriguing could it really be? How much could he "really" tell? I was surprised. I was pleasantly surprised. Within the first 30 pages of the book I had a lump in my throat. It all came back to me like it was just yesterday... that day in history where it's one of the few times you can hear people say "I was doing this or that when I heard the news". I recalled, all too easily, that feeling of doom & fear that overtook me as a parent having to explain to two 9 year olds and a 12 year old what had just happened to our country. I recalled checking plane schedules where I worked, seeing who could or couldn't have been on any of the planes they had mentioned on the news. And I recalled people gathering around the televisions, radios, whatever means we had available, to simply get more information about what had just happened on our own soil. Within those first few pages, I had tears in my eyes and memories running rampant in my mind. I knew this was n

Must read to better understand our situation

Published by Thriftbooks.com User , 13 years ago
Tom Ridge tells us where we are and where we need to be. The nice thing about the book is that it gives us valuable glimpses into the decision-making of government. Ridge has had a spectacular career, serving as a Member of Congress, Governor and then Secretary. It is interesting to read.

An Insider's Evaluation of Homeland Security

Published by Thriftbooks.com User , 13 years ago
As Homeland Security Secretary, Ridge observed a need for various emergency response teams to work better and perform better. He saw a need for regional offices, improving public education on terrorism, and avoiding politicizing national safety efforts. Ridge sees this Cabinet position as a challenge. Sen. Joseph Lieberman called it "building an ark after the flood started". Ridge also saw power plays, which are common in government office politics, continue even in homeland security matters. Ridge was Pennsylvania Governor on September 11, 2001 when one of the planes hijacked by terrorists crashed in Shanksville, Pa. He flew by helicopter to the crash site. He was touched by the knowledge that the passengers had likely overtaken the hijackers. He believes this provides people a sense of empowerment during crises rather than feeling hopeless. For 1,200 years, Ridge notes, Christians and Jews live din safety in countries ruled by Muslims. Al Qaeda now calls for the destruction of Western civilization. Bernard Lewis argued Muslims had a growing sense of victimhood. Samuel Huntington blamed growing feelings of darkness emerging form people obsessed with the pack of power their religious views were providing. Sayyid Qutb tortured in prison after involvement in a failed assassination attempt of Egyptian President Gamal Abdul Nassar, gained a following. Qutb's devotes sought to attack Muslim leaders they felt were too attached to Western society. As Ridge notes, "the rest of torture in those Egyptians was, I think, predictable--a rage for revenge." Ridge found the CIA and FBI willing to work together. Vice President Cheney was very involved on security issues. He also noted President Bush allowed others in meetings to speak as equals. Local and state government agencies have to be a part of coordinate response efforts. Yet within the agencies is often found inadequate staff, training, and resources. They may not respond as the Federal government expects. Ridge wants to provide more equipment to local and state governments responding as they are the first on the scenes of most disasters. Intelligence "is an art, not a science", according to Ridge. Speculation that Las Vegas or Hollywood could be targets made sense as this would be striking at symbols of what terrorist groups despise. Speculation that the Golden Gate Bridge could be a target made less sense due to the difficulty such an attack would require. Ridge wanted a system that could provide urgent warnings to the nation. Only Israel was found to have such a system. From these investigations, a color alert system was created. Under orange, pubic events would be canceled. Under red, response teams would mobilize and public and private facilities would be closed. Ridge notes that critics such as Richard Cohen believed the public would eventually ignore the flow of warnings. Ridge notes the U.S. has responded by creating increased border inspections, airport inspections,
Trustpilot
Copyright © 2022 Thriftbooks.com Terms of Use | Privacy Policy | Do Not Sell My Personal Information | Cookie Preferences | Accessibility Statement
ThriftBooks® and the ThriftBooks® logo are registered trademarks of Thrift Books Global, LLC