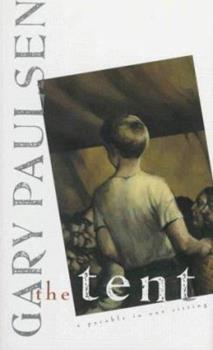 The Tent: A Parable in One Sitting

Teenage Steven and his father, Corey, take to the road with a stolen Bible from a cheap motel, an old army tent, and less than the best of intentions. Tired of being poor, Steven's father is certain that preaching the Word of the Lord is the easy way to fame and fortune. But just when they've got their act down pat and the money is rolling in, Steven and Corey begin to realize that what they'd originally thought of as a "good lie for good reasons"...

A Book You Can't Put Down Until You Are Finished

Published by Thriftbooks.com User , 16 years ago
The book The Tent is such a good book you won't want to do anything or go anywhere until it is over. The Tent is about this family and how they don't believe in God and never talk about God until one day their dad tells the story about God. Then they start to preach. I had to stay up until 11:52 just to finish the book; I didn't want to go to,but I had to because my eyes wouldn't let me stay up. SCook

Published by Thriftbooks.com User , 21 years ago
THE TENT IS ABOUT A TEENAGE BOY AND HIS FATHER WHO ARE VERY POOR.THEY LIVE IN AN OLD RUN DOWN TRAILOR, AND NEED SOME MONEY JUST TO BUY THEIR EVERYDAY NEEDS,SO THEY DECIDE TO GO PREACH IN TENTS ALL AROUND TEXAS

One of the Good books

Published by Thriftbooks.com User , 21 years ago
I'm not a real book worm, but if you are a real book worm you need to cheak this book out. I'm a teenager who loves God, and this book tells about a boy and his fother who needs money.They live in a old mobole home,and his foter gets tired of not being able not to get his son evey thing his son would like. The boys fothers friend got rich off of making pepol think he was a pricher.So the boys fother decids to do the same thang and to bring his son allong. At first his son did not like the idia, but he did not want to mack his fother mad so he gose along with it.They bring aold army tent and $25.00.The first town they stoped in was a small town in Texas.They stayed in a holtail for free by saing that they are cheaking the place out for some friends. the boys dad tackes the Bibole from the holtail.The frist night they made fliers for $0.10.They made $50.00 the first night. They hier facke hert pepol,they have everythang,but after this they have God.

One of his best!

Published by Thriftbooks.com User , 21 years ago
Being a Gary Paulsen fan, I may be a little biast, but this certainly is my favorite book. This fantastic story caught my attention just by looking at it. As usual, I found it in my favorite section. It paints a picture of a single father struggling to make ends meet with his son, Corey. Stealing a hotel bible, Corey's father studies it and performs fake healings with cheap sermons. Tricking people out of their money, Corey and his father are in the midst of deciding if this is true. All this is beautifully written on the back cover, but, hey, this is a review. I recommend this book to almost anyone able to read, for it is extremely short and easy to follow. I guarentee you that you will not be dissappointed, lest you object to the Christian religion. If you have already read this book, I suggest you try the Hatchet series or one of Paulsen's other books, The Crossing.

A Parable of Greed

Published by Thriftbooks.com User , 21 years ago
Stephen and his father, Corey, live an economically poor life. One day Corey decides to become a tent revival preacher to make some money. When his efforts meet with success, Stephen and Corey enjoy a wealthy life, unlike anything they've ever known. But when Stephen's conscience starts to get to him, he is faced with a conflict between honesty and a wealthy life with his father. This book is short and simple, especially compared to Gary Paulsen's usual fare. However, the story is not cut short at all. The outcome is convincing and uplifting. The writing is excellent, and deserves a spot on Paulsen's more acclaimed books like Hatchet, The Winter Room, and Dogsong.
Trustpilot
Copyright © 2022 Thriftbooks.com Terms of Use | Privacy Policy | Do Not Sell My Personal Information | Accessibility Statement
ThriftBooks® and the ThriftBooks® logo are registered trademarks of Thrift Books Global, LLC