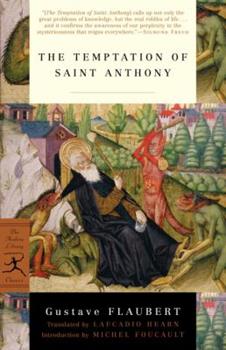 The Temptation of Saint Anthony

by Gustave Flaubert and Lafcadio Hearn

A book that deeply influenced the young Freud and was the inspiration for many artists, The Temptation of Saint Anthony was Flaubert's lifelong work, thirty years in the making. Based on the story of the third-century saint who lived on an isolated mountaintop in the Egyptian desert, it is a fantastical rendering of one night during which Anthony is besieged by carnal temptations and philosophical doubt. This Modern Library Paperback Classic reproduces...

Good for understanding Flaubert as well as religeous history

Published by Thriftbooks.com User , 21 years ago
As others have noted, this book is particularly helpful when trying to understand Flaubert and his other works. The popularly read Madame Bovary in particular features a character, Homais, who continually tries to impose his own ideas about religeon on people who aren't even interested in listening... it is interesting to see, though, where views similar to Homais' come out in the Temptation of St. Anthony.The work itself is written like a play, though to do this on stage would be an interesting feat. It would perhaps better take the form of film, such as Bunuel's Simon in the Desert.For those interested in getting in to studying early Christian movements following the death of Christ, although this will hardly serve as a textbook, Flaubert seems to have had a broad repetoir of little known (today, at least) historical facts and facets that will help point an aspiring student in the right direction.Though hardly light reading, and probably of little appeal to those who do not have an interest in either Flaubert, French literature, or religeon, the trials and tribulations Antony is subjected to through one night of temptation will be at the least entertaining, if not enlightening, to a few.

Published by Thriftbooks.com User , 21 years ago
Flaubert's stories are, with "Madame Bovary", his greatest creations. They show a style that was never before seen in French literature, a purity of expresion and depth of meaning, that will live forever.

Published by Thriftbooks.com User , 21 years ago
This is a work that should not be neglected by those interested in Flaubert or by lovers of French Literature. It's format resembles an old-fashioned cyclorama, which was basically a revolving canvas, portraying various interpretive images to an audience that would be seated in the middle of a room. Or it may recall the same period's "magic lantern" which would produce a similar effect, projecting a series of images on a flat wall, the precursor of modern cinema. Flaubert ushered in an entirely new sensibility to the world of letters. He reinvented the concept of the literary artist as word-and world shaper. The word is the world and vice-versa. No writer ever engaged in such a Herculean struggle to shape every word, every sentence, every image, every assonance or consonance to perfectly conform to his intention. Flaubert engaged in a kind of ascetisism his entire adult life, which is hardly news, but is central to an understanding of this work and to his attraction towards St. Anthony for a protagonist. Flaubert was for many years a kind of hermit in his study at Croisset, where he retired to his study to read books and write novels. He had contact with his mother and adopted niece and wrote letters to a mistress (Louise Collet, and later to George Sand) along with a few male friends. He would make brief sojourns into Paris, but for the most part, stayed to himself in his provincial hideaway. What he dreamt of there, besides his most famous works (Madame Bovary and L'Education Sentimentale) were reveries such as this novel and Salammbo, another book set in the Near-East and equally evocative in terms of his treatment of that region's sensual and Byzantine richness. "The Temptation" sparkles with some of Flaubert's most carefully and lovingly constructed imagery. It is the author's own homage to the fertility of his imagination. He never fathered a child literally that we know of, but this work and Salammbo were his ways of saying that he was fertile in all other respects. Each passing personage or creature is a seed sewn by this father of imagery. One of the most senseless and ill-informed utterances in the annals of criticism is Proust's comment that Flaubert never created one memorable metaphor. Flaubert's entire cannon is one vast metaphor. They are evident in every sentence and every passage of every novel he ever wrote. This is particularly true in this work, as any informed reader will no doubt conclude after reading it. One other area of recommendation extends to students of Gnosticism. Flaubert encapsulates much of the central theories of the early Gnostic Fathers and Apostles in a few well-delineated characterisations and brush strokes. I would also recommend the Penguin edition, edited and translated by Kitty Mrosovsky, for her introduction and notes. The only drawback I have with her is that she portrays Henry James as denigrating Flaubert's work, where in fact he generally effusively

Published by Thriftbooks.com User , 21 years ago
This is a startling and brilliant piece of prose poetry that deserves to be more widely read; just don't expect anything like his more conventional novels. Indeed, don't read it expecting a novel at all; it reads more like a cross between modernist poetry and Medieval vision literature.
Copyright © 2020 Thriftbooks.com Terms of Use | Privacy Policy | Do Not Sell My Personal Information | Accessibility Statement
ThriftBooks® and the ThriftBooks® logo are registered trademarks of Thrift Books Global, LLC