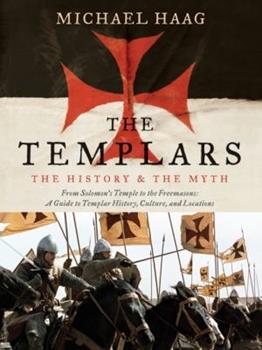 The Templars: The History and the Myth: From Solomon's Temple to the Freemasons

Arguably one of the most provocative, puzzling, and misunderstood organizations of medieval times, the legendary Knights Templar have always been shrouded in a veil of mystery, while inspiring popular culture from Indiana Jones to Dan Brown. In The Templars, author Michael Haag offers a definitive history of these loyal Christian soldiers of the Crusades--sworn to defend the Holy Land and Jerusalem, but ultimately damned and destroyed by the Pope...

A Complete and Enjoyable view of the Templars

Published by Thriftbooks.com User , 12 years ago
What sets Michael Haag's book apart from the normal fare of books about the Templars is how much time he spends not talking about the Templars, but rather other groups, movements and religions that existed alongside the Templars. This is a real strength of the book, as he sets the tone for understanding how the Templars came into existence and the politics that allowed them to become the movement they were, as well as the politics and intrigue that eventually led to their demise. Haag is also very good about presenting, classical thinking about the Templars, and then alongside this he includes newer source material that the modern view. Throughout the book he intersperses short essays on related topics to give the reader a better feel for the history of the time, with topics such as: The White Slave Trade; Chivalry and Reality; Richard the Lionheart and the Templars, etc. There are times when he presents older and outdated thinking about certain subjects, such as the history of Jerusalem and the destruction of the Temple during the first Jewish Revolt and presents these as fact. Only much later in the book does he add the relevant current thinking and correct himself. This is a very minor issue and the fact that he eventually includes modern sources to support these events makes up for these minor inconsistencies and in my mind validates that he has poured over many source materials to get to the true nature of the Templars. Haag includes a discussion about conspiracy theories concerning the Templars and he is clear to separate fact, fiction and far-fetched myths. This allows one to get to know the true Templars, while also enjoying the legends and myths that have grown around them. He also includes a few chapters on other books, movies and websites that pertain to the Templars, and his personal critiques of these sources. His insight into these sources is welcome as he clearly knows how to separate the strong from the weak. If the Templars are of interest to you (as they are to so many of us), or a student of the time I think this book will be worth your time and effort. Haag has a very easy and fluid style that allows him to present this fascinating, yet complex subject matter in a format that is accessible to almost everyone.

The Templars by Michael Haag

Published by Thriftbooks.com User , 12 years ago
This is great book for the novice templar reader or the hardcore fanantic. Easy to read and provides thought-provoking facts about this legendary force.

A Very Informative Book about the Templars

Published by Thriftbooks.com User , 12 years ago
Though I have only read several chapters of this book I am facinated with the historical and mythical information contained therein. The book appears to be highly researched, organized, and is easily readable. The author, Michael Haag, seems to have quite the historical and educational background for this time period making him very knowledgeable and qualified for such an undertaking. Thusfar I like this book alot. It is a good resource for those wishing to do research in this area as well as for those brothers in freemasonary desiring or seeking further enlightenment.

Published by Thriftbooks.com User , 12 years ago
Michael Haag's book is an honest history that is well-researched, relying on documented history rather than myth and speculation. It does address all the hoopla surrounding the order in an excellent chapter entitled "Conspiracies" where he sheds light on many myths. The photos of famous Templar places at the end of the book are also welcome. My only criticism is the short shrift he gives to the later crusades, in particular the Richard the Lion Heart era which only warrents a page or two. Like many books on the Templars, at times the focus wanders to a discussion of the crusades in general. Although to some extent the context is necessary, more detail on the Templars proper, especially during the 1200's, would have strengthened the book. All in all a good book, but if you are already a crusade/Templar buff there won't be too much new aside from a nice discussion on the Chinon parchmant and other recent discoveries.

A Great History both of the Templars and their times

Published by Thriftbooks.com User , 12 years ago
Anytime I pick up a book with "The History and the Myth" of some subject in the title, there is usually more myth still being presented as history than history itself and the book turns out to be a disappointment. This book is surprisingly different and surprisingly readable. For one thing, the book is not just about the Templars, but about the Templars and their times (from their inception Christmas Day, 1119 to November, 1312, when Pope Clementine, under pressure from the king of France, Philip IV, disbanded the group and ordered all Christian monarchs to arrest them and seize their assets). In learning about the Templars, you also learn a lot about the first Crusades, the history of Europe and the Roman Catholic Church, the Byzantine Empire, Saladin (conqueror of Jerusalem), and a host of other matters and people. For another, the actual background and history of the Templars is much more interesting, and fascinating, than any fictionalized accounts in the movies, think Indiana Jones, or books, think Dan Brown novels. There are many reasons the Templars did not fade into history after being disbanded. This book ably reviews them all, including their renown at the time as warriors (although somewhat surprising only about a tenth of its members were actually frontline fighters) and code of conduct, their wealth as an Order, and their construction of great castles and cathedrals. Overall, the book is a very worthy, and up to date, history on this fascinating group.
Trustpilot
Copyright © 2022 Thriftbooks.com Terms of Use | Privacy Policy | Do Not Sell or Share My Personal Information | Accessibility Statement
ThriftBooks® and the ThriftBooks® logo are registered trademarks of Thrift Books Global, LLC