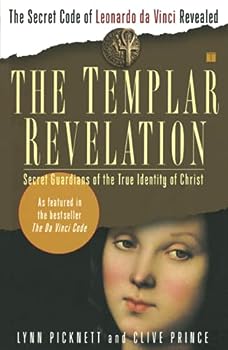 The Templar Revelation: Secret Guardians of the True Identity of Christ

by Clive Prince and Lynn Picknett

THE MOST CLOSELY GUARDED SECRET OF THE WESTERN WORLD IS ABOUT TO BE REVEALED -- AND YOU WILL NEVER SEE CHRISTIANITY IN THE SAME LIGHT AGAIN. In a remarkable achievement of historical detective work... This description may be from another edition of this product.

Published by Thriftbooks.com User , 18 years ago
After reading the Da Vinci code I found myself wanting to explore more factual work regarding the mystery of the Holy Grail, the Priory of Scion, and Mary Magdalene. I was surprised, and a bit intimidated to find that there were literally dozens of books on the subject.Taking a stab, I stared with "The Templar Revelation" by English authors Lynn Pickett and Clive Prince. This is, I think, a good jumping off point for people as it delves into many of the mysteries surrounding all of the above subjects in relation to the true identity of Jesus Christ.You will read about the founding of the Knights Templar, and how there may have been much more behind their founding than trying to retake the holy land and convert the heretics. Did they actually know the secrets of Jesus Christ and are the ones protecting the true history? Was the Templar inner circle actually the founding members of the Priory of Scion?Much of the book is spent discussing the mystery of Mary Magdalene. Various theories are discussed such as Mary actually being married to Christ and actually being his most trusted apostle. One theory goes that it was Mary who actually carried on Christ's church after his death, and her work was subsequently covered up by the church and the Gospels that speak of her (such as the Gnostic gospels and Gospels of Phillip) were purposely left out of the new testament. You'll explore relations to worship of Mary Magdalene to the Egyptian cults of the Goddess Isis, and of the startling similarities between Christ's death and resurrection and similar stories of pagan gods death and resurrection. Startling to say the least.Then there is the mystery behind the French Abbey of Rennes-Le-Chateau. A strange and provocative mystery about the priest who seemingly had endless wealth to build a very strange abbey filled with both Christian and pagan symbolism. Where did he get this money from? Was it a secret treasure he found? Was he funded by some mysterious benefactor? Could he actually have uncovered the secret remains of Mary Magdalene, long buried on the site?The theories come rapid pace in this book and it's sometimes difficult to keep them all straight. The authors do not forward any particular theory, but rather try to lay them all out with as much fact as possible. It certainly gives one to pause and certainly devout Christians may have some big problems with the idea of Jesus being married, fathering children, and possibly embracing pagan beliefs.Among the most interesting and somewhat chilling proposals is what seems to be a concerted and diligent effort on the part of the catholic church to not only erase, but to rewrite history. There's no doubt that Gospels were written around the same time as those included in the new Testament, that were left out purposely.As I said, it's a good jumping off point to explore some of these theories and there are many more books out there that delve into greater detail on these various ideas and concepts.

Published by Thriftbooks.com User , 22 years ago
I can't remember the last time I read such an enlightening history book. The authors' scholarship is impressive, and their theory is absolutely stunning. The authors' premise is that Christianity is an offshoot of Egyptian religion. If this is indeed true, it would explain (albeit not completely) why so many of pagan/mythological themes exist in Christianity. Furthermore, the book convincingly asserts that the early Christian fathers competed with other Judaic sects for preeminence and at the same time felt the need to differentiate themselves from the other religious movements. In presenting supporting evidence for this, the authors provide an explanation as to the origins of some of Christianity's more peculiar characteristics - emphasis on the male, misogyny, mind/body duality, and loathing of the flesh. The book explains how the heretics may have understood the not-so-firm origins of Christianity, and how such knowledge threatened the legitimacy of the established Church. Hence, the Church felt a greater need to punish deviance (which would explain the Inquisition and the Church's general intolerance of bold - especially scientific - ideas during the last 2000 years. Finally, I never felt that the conventional history books gave an adequate explanation for the birth of the Renaissance, which seemed to have sprouted into existence in full bloom after more than a millenium of austerity. The theory presented in this book suggests a more plausible explanation for the birth of the Renaissance and its bold new glorification of humanity: that the heretical/gnostic elements, which had existed in the undercurrents throughout European history, gained momentum and manifested itself as the Renaissance. In short, the book's theory sheds new light and understanding on the developments of the 2000 years of European history.

We are slowly getting nearer to the truth!

Published by Thriftbooks.com User , 23 years ago
'The Templar Revelation' forms a kind of trilogy with previous authors works such as 'Holy Blood, Holy Grail' and 'The Second Messiah'. The current work opens with a fascinating disclosure about Leonardo de Vinci, and closes powerfully with the 'revelations' about Mary Magdalene and the 'initiates' of a Jesus-Egyptian mystery school. Prince and Picknett point out that some of Jesus's own disciples didn't really understand what he was teaching, and this book takes us one step closer to the reason why the Templars and Prieure de Sion venerate Mary Magdalene and John the Baptist above all. Great read!
Trustpilot
Copyright © 2022 Thriftbooks.com Terms of Use | Privacy Policy | Do Not Sell or Share My Personal Information | Accessibility Statement
ThriftBooks® and the ThriftBooks® logo are registered trademarks of Thrift Books Global, LLC