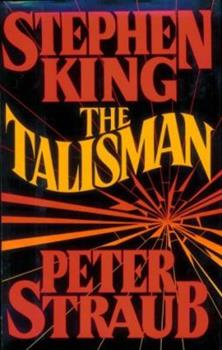 (Book #1 in the The Talisman Series)

To coincide with the publication of Stephen King and Peter Straub's extraordinary new thriller, BLACK HOUSE, here is the story that started it all. On a brisk autumn day, a twelve-year-old boy stands on the shores of the gray Atlantic, near a silent amusement park and a fading ocean resort called the Alhambra. The past has driven Jack Sawyer here: his father is gone, his mother is dying, and the world no longer makes sense. But for Jack everything...

Published by Jennette , 6 months ago
When I ordered this book, The Talisman, it was my understanding that the book had a dust cover. I don't recall the description stating no dust cover.

Favorite book of all time!

Published by Thriftbooks.com User , 2 years ago
I truly rate this as my favorite book of all time. At first, I wasn't that into it. But those first several pages were needed to set the scene and the pace for the rest of the book. It is so difficult to describe because it's in a league all it's own. You are pulled in. His experiences become your own. His trials and his triumphs are yours. They did such an amazing job. I don't read many books more than once. This one, I have read a few times.

Published by Thriftbooks.com User , 3 years ago
This was the first Stephen King book I ever read. I've now devoured most of his books and "The Talisman" still ranks in my top 3 of his creations. I don't know how much of the book was written by him or Peter Straub but it doesn't really matter. The story was all-consuming to this reader. Never thought I was a fan of parallel worlds...but it's not the whole focus of the story. Certainly not "way out there" with magical creatures and galaxies far far away. It's one of a handful of books that I'll never give away....MINE to enjoy over & over.

One Of The Greatest Novels Ever

Published by Thriftbooks.com User , 16 years ago
A little while ago I did a writeup for Clive Barker's "Weaveworld" and said it may be the best blend of the horror novel and the fantasy novel ever. While I stand by that 'may be' it occurs to me now that I should have also mentioned "The Talisman" as a voraciously strong contender for that title. It's about a lot of things, including the existance of paralell realities overlaying one another and what happens in one of them also affecting what happens in the other (or others?) but perhaps the best way to describe the slice in space and time in this stunningly realized Universe (Multiverse?) we're taken to in "The Talisman" is to say that it's about a young boy named Jack who's mother is dying, and to save her he has to go on a journey to obtain a mystical artifact (the title 'Talisman'), and his mother's counterpart is also dying. And she's the Queen of one of Earth's parralell selves. This may sound like the basis for a 'Y.A.' novel a la "Harry Potter" or "Abarat" but it's not, this novel is graphic and brutal through much of its run. It also contains some of the very best of the worlds of charm and whimsey and wonder at other times. Jack is possessed of the ability to 'flip' from one world to the other, and the novel spends time in each. Items from one world, as well as people, have their counterparts in the other world as well, but in different forms. What is a house in one world could well be a hut or a castle or a tent in another. Magic is far stronger on the 'other' world, technology more prevelant in 'ours', but each exist in both. One of the characters encountered by Jack during his time in the other world (aka The Territories) is Wolf, a member of a race of non-evil werewolves, and this is one of the most instantly engaging and lovable characters the world of storytelling has ever brought to us. Sometimes, in between the time when I first read a book and the time I may eventually re-read it again years later, I like to refamilirize myself with old favorites as I rearrange them on their shelves, flipping through the pages here and there, occasionally reading a couple of paragraphs, and bringing the memories coming back. This is a book that it's hard to do just that with, because perusing just a few lines can compel you to go on for pages and pages. It reminds me of when I was first getting into novels bigtime, and this book defined 'Impossible To Put Down', keeping me going for hours past midnight, by far the longest I'd ever read in one sitting at that point. For several chapters straight the suspense was just so unbelievable it was unthinkable to stop, all leading up to a climax (in the middle of the book; this tale has not one but several climaxes) that still stands as one of the most earthshaking in history. Complete in itself but tying into other tales (and directly sequelized in the equally awesome "Black House"), this is just incredible, one of the very best for either author certainly. As a gratuitous plug, I'd a

a wonderful but not perfect story

Published by Thriftbooks.com User , 17 years ago
I thought this book was very well written for the most part. It was a book that I had trouble putting down at times because I was so riveted to the story. However, there were times in the story where I had no trouble putting the book down as it was becoming tedious.There were parts of the story where things just happened to fall into place too easily for the character, and that left me a little disappointed in the story. There were also many scenes that I had to re-read several times to try to grasp what the authors were trying to portray exactly. The scenes tended to be very vague as to their meaning, (maybe done on purpose, I don't know). But, by no means were these any reasons not to read this book. The two authors have written a very good tale of a boy on a journey, one that has very memorable characters that you do not forget. This book is well worth picking up to read. As are most of Mr King's stories, I do not believe that this one disappoints the reader in any way. Not perfect, but very exciting none the less.

Published by Thriftbooks.com User , 18 years ago
I bought this book at a used bookstore years ago after discovering that I loved Stephen King's books. I put it on my shelf with other books I meant to read, but it was a year before I picked it up again. Finally I did, read a couple chapters... then I put it back down. I couldn't get into it. A month and a couple books later, I decided to give it one more shot. So I started from the beginning, but still just wasn't in to it and had reached my previous stopping point. I had made a vow that I would push on though, and it wasn't 5 minutes after I read on that I was literally in a whole new world. King and Straub showed Jack Sawyer a new world, and they took me along as well. I could smell the bread baking at the pavilion, I was best friends with Jack's new friend Wolf, I was running in horror from the Elroy-Thing in the Men's Room of the Oatley Tap. I was IN that world. I've owned and read countless books, but The Talisman has always remained my all-time favorite. I have read it about 6 times, and each time I am whisked back to that world that I love and fear so much.

Published by Thriftbooks.com User , 20 years ago
It was with great excitement that I discovered that Stephen King and Peter Straub had teemed-up to write this book. The story and characters are absorbing and as you, and the main charater learn more of the story, it builds to the typical crescendo ending that is the hallmark of both authors. The good guys are good, and the bad guys are positievly evil. An odessey that no normal person would want to be caught up in, but that we love to experience vicariously.It is King and Straub at their unpredictable best. Thank God there is a sequal. I can hardly wait!

Published by Thriftbooks.com User , 21 years ago
J.R.R. Tolkien once said, "Write of Earth, but not Earth," That is exactly what King has created for the reader. I originally wasn't going to write a review, but after reading many of the others i felt that i should at least give my opinion even if it isn't heeded. To begin with, Jack Sawyer begins on his quest to save his mother's life. I have read the book twice, fearing Morgan Sloat, hating Osmond, crying for Wolf, and losing control of the hinge in my jaw for Jack's final victory with the Talisman. And both times, it has been one of the best books I have ever read. Some say King focuses too much on detail, but it is that detail that makes him great, that makes every action of every character sing with joy and cringe in agony. Some have also said that the ending was "obvious" and "lavish". My response to that would be that all stories that portray good and evil and human nature caught between the two have obvious endings. Good always wins, and if you are waiting for evil to triumph in one of King's novels then maybe you had better find another author to read. The book, in fact, is a bit lengthy, but with the imagery and breadth of emotion and toil, it suits its purpose just fine for me. Grade: A+

The Talisman Mentions in Our Blog 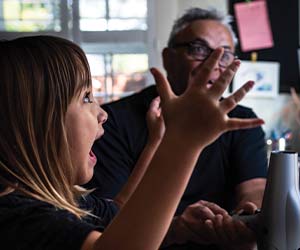 Days of Distance Learning and Dreaming
Published by Terry Fleming • March 20, 2020
"It was a scene both heartbreaking and inspiring—the sight of my daughter on her computer on a group chat with her 4th grade English teacher and several of her classmates." Schools all over the country are coming to terms with a new normal, e-learning for kids, meaning they and their caregivers need to make home both work and playground. Terry is facing that himself right now and shares his experience in this blog.
Read Article
Copyright © 2020 Thriftbooks.com Terms of Use | Privacy Policy | Do Not Sell My Personal Information | Accessibility Statement
ThriftBooks® and the ThriftBooks® logo are registered trademarks of Thrift Books Global, LLC