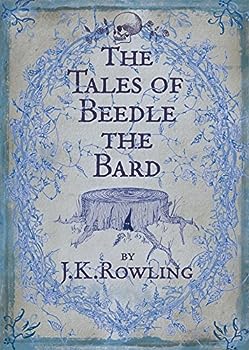 the tales of beedle the bard

(Part of the Hogwarts Library Series)

by J.K. Rowling and J.K. 

A brand-new fully illustrated edition of J.K. Rowling's classic tales from the wizarding world, with brilliant full-color artwork by award-winning artist Lisbeth Zwerger.The Tales of Beedle the Bard... This description may be from another edition of this product.

Tales of beedle the bard

Published by Katie , 2 years ago
This book is such a fun read! I really enjoy it. I'm also happy with the books condition. It had one little spot with damage on the corner, but overall, great quality.

I have always wanted this book in my collection.

Published by Hpavpjmha lover , 2 years ago
I enjoyed reading this book and adding it to my Harry Potter book collection.

I wish there had been more.

Published by Thriftbooks.com User , 13 years ago
Though I enjoyed the individual stories very much, I think what really made the book was Dumbledore's footnotes. Those brought me back to the great feeling of what it is to be a Harry Potter fan. I particularly loved his comments about members of the Malfoy family, and the woman who was too sensitive for some of Beedle's tales, Blaxum I think the name was. The illustrations are also surprisingly good, considering they were done by Rowling. I knew she could draw to an extent, I just didn't know what that extent was. I'll probably be reading these to my kids more often than Cinderella or Sleeping Beauty. Beedle's stories are so short, yet I already prefer them simply because of the subtle message they would to little girls as opposed to the message Cinderella or Sleeping Beauty might send.

Published by Thriftbooks.com User , 13 years ago
Like the fairy tales of old, The Tales of Beedle the Bard have good, evil, and blood. The first two tales are appropriate for any age, the other three should be read by a parent before reading them to younger children. If a reader is familiar with the tales of the Brothers Grimm he/she will appreciate the similar feel of these tales by Rowling. Most fairy tales are in nature dark, many even gruesome - despite what Disney has done to them. Rowling doesn't shy away from that particular element of true fairy tales, and even makes fun of how others soften them up (during one of Dumbledore's commentaries.) I also found shades of tongue-in-cheek personal humor: Imposters posing as wizards, possessing no true magic - um, yes, Ms. Rowling, I agree that there are hack writers who get lucky and are held up only by a whole lot of hype, and then there are the real writers who produce real magic, and who's hard work and talent got them where they are, not a team of marketers. On that note, many may try to weave tales of wonderment like the Harry Potter series, but no one will ever take J.K. Rowling's crown. Hail to the Queen! Please grace us with your presence again soon! Your devoted fans miss you terribly! Though I really liked these tales, I long to get sucked in by your sweeping plots, and become best friends with your characters. I literally get teary-eyed when I think that there won't be a new Harry Potter book coming out this summer! PLEASE GIVE US ANOTHER SERIES! :)

Beedle is Brilliant, as expected

Published by Thriftbooks.com User , 13 years ago
The Tales of Beedle the Bard was a wonderful read. Not only did we get four original tales from Beedle, aside from The Tale of the Three Brothers from Deathly Hallows, but there was insightful and entertaining commentary provided by none other than Albus Dumbledore himself which he wrote 18 months before his death. Jo was kind enough to provide additional info that Muggles may not be accustomed to as well. We not only got some interesting insight about the background of the stories and Beedle's inspiration for writing them, but we got neat little tidbits about the Wizarding World as well, such as some background into Nearly Headless Nick's demise, Professor Kettleburn (the CoMC teacher before Hagrid), some of Malfoy's relatives, as well as several other awesome facts that JKR never got to include in the main series. Out of all of the stories, I'd have to say that my favorite is The Fountain of Fair Fortune, although they're all amazing as I knew they would be. All in all it was, as Jo Rowling always produces, a wonderfully imaginative, entertaining, brilliant read, with dashes of humor here and there that she has mastered so wonderfully. The Tales of Beedle the Bard, therefore, comes highly recommended! P.S. Grumble the Grubby Goat FTW.

My only complaint: I wanted more

Published by Thriftbooks.com User , 13 years ago
If you love the Harry Potter series, then this is a must-have. It arrived in the mail yesterday, and I devoured it right away. And that's my only complaint: it's brevity. It's a short, quick read. But a fun one. And it's not simply a handful of fairy tales from the wizarding world. The commentary by Albus Dumbledore on each story was a really nice touch, in some cases even more entertaining to me than the stories themselves. If you were expecting a thick book that would absorb you for hours as the Harry Potter series did, I hope you're not disappointed in this book's brevity. It's still worth the price if you enjoy the series, and it supports a charitable cause. If you've never read the Harry Potter books (or seen the movies, I suppose) then do NOT consider this a sample of the series. You will not glean any sense of the depth, quality and, as everyone else calls it, the magic of the Harry Potter world. This book is a tasty dessert to those who've feasted on the seven-course series.

The Incomparable Tales of Beedle the Bard

Published by Thriftbooks.com User , 13 years ago
Everything written with the pen of JK Rowling seems to be magical, and this volume is no exception. The very genesis of this book is so special: the tales in it, we are told, were left to Hogwarts by the great Professor Dumbledore. The style and sentiment of these five little fables will come as no surprise to anyone who is a Harry Potter fan -- in fact one of them should already be well known to all. "The Tale of the Three Brothers" was first told in Book 7 of the Harry Potter series. It is such a simple yet strong tale with such a forceful message (much like all of JK Rowling's tales) of the difficulty of making hard choices and being the master of one's own fate. I have read this fable to my sons who are still pondering its message. No one less than Hermione Granger serves as the translator of these works, and Ms. Rowling has included with the text Dumbledore's commentary and some wonderful illustrations of her own. The simplicity of the tales only underscores the wonderful messages they bear in terms that are not at all preachy. In many ways, the stories remind me of many standard fairy tales, such as those written by Aesop or the Brothers Grimm, but in a context much more likely to appeal to young children as well as the magic lovers among us. It has always amazed me that anyone could find anything in Rowling's work that is somehow not wholesome. Her messages as always are clear, simple, direct and as important life lessons as children will ever learn: the use and abuse of power; the benefit of working together; being able to recognize and value what is special in each of us; the dangers of working with the dark arts (i.e., the abuse of power). It is no wonder that her work is so loved and so enduring. I will treasure this volume as I have treasured all of the Harry Potter books. Only one of the fables is a bit too dark for me (The Warlock's Hairy Heart); I'm not sure I will read it to my kids as it is a bit gruesome. I have not yet received the Collector's Edition that I pre-ordered. I know that there is much speculation that this edition may have been over-subscribed. My order information indicates that I should receive it December 8th. I certainly hope I do, but if not, I notice that it is already for sale on ebay, and most sellers are not seeking to gouge people too badly. The real disappointment in ordering it on ebay would be losing out on the chance to make a contribution to Ms. Rowling's wonderful charity, The Children's Voice Campaign. But I think I might just make a separate contribution, as a small return for the many wonderful hours of reading and reflection she has given me!
Trustpilot
Copyright © 2022 Thriftbooks.com Terms of Use | Privacy Policy | Do Not Sell or Share My Personal Information | Accessibility Statement
ThriftBooks® and the ThriftBooks® logo are registered trademarks of Thrift Books Global, LLC