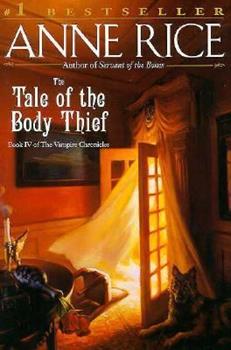 The Tale of the Body Thief

(Book #4 in the The Vampire Chronicles Series)

In a gripping feat of storytelling, Anne Rice continues the extraordinary Vampire Chronicles that began with the now-classic Interview with the Vampire . For centuries, Lestat--vampire-hero, enchanter, seducer of mortals--has been a courted prince in the dark and flourishing universe of the living dead. Now he is alone. And in his overwhelming need to destroy his doubts and his loneliness, Lestat embarks on the most dangerous enterprise he has undertaken...

A book of unspeakable excellence

Published by Thriftbooks.com User , 21 years ago
This book was terrific! I was drawn in word by word. I found myself yelling at Lestat not to make a terrible mistake, and then mourned for him when Louis didn't help him. I cheered when he cornered James and I gasped when he turned agaisnt David's wishes. This book definetly strikes up my emotions as do all of Anne's books in her wonderful Vampire Chronicles. This is a great read and I highly recommend it!

Not the best of the series, but certainly worth it

Published by Thriftbooks.com User , 21 years ago
I have to say that in terms of the series as a whole, Tale of the Body Thief is not as good as the others. I can't really blame Anne Rice though 'cause Queen of the Damned was just too hard of an act to follow. :) However Tale of the Body Thief is still a damn good book, one of the best I've ever read, and is a must-read for fellow Lestat worshippers. TotBT is definitely a character-driven story, and while it still touches upon many of the larger philosophical issues that Rice deals with in all the books, this one was a lot more "down to earth" and mundane in a sense than the others, which is why I suspect a lot of folks didn't like it. I won't spoil the plot, but basically Lestat, in yet another one of his "do first, think later" endeavors (*grin*), gets the chance to become human again, and of course it's not all it's cracked up to be. I think this book, even more so than The Vampire Lestat (which was really just a history lesson IMHO), really takes us inside Lestat's head, and more importantly his heart. From the truly comical (the scene where he tries going to the bathroom for the first time in 200 years :P) to the truly poignant (the entire section with the nun was worth reading the book for, especially the heartbreaking scene towards the end), this book really touched me. Just as Lestat came away with a new appreciation for his vampiredom, I came away with a new appreciation for my beloved antihero, and a lot of my conceptions of him changed--for the better. I absolutely adored this book, and I think other Lestat fans will too. One last thing, I just have to say that as a bisexual Rice fan I think it's positively ridiculous some of the comments people have made regarding the more open treatment of alternative sexualities in this book. If you have a problem with homosexuality wtf are you doing reading Anne Rice books! There have *always* been homoerotic undertones in Vampire Chronicles, from the very first book. She has always dealt with sexuality and gender issues in these books. If it took Anne telling you outright that Lestat is bisexual in TofBT for you to know at all you must be some kind of moron, or didn't read the other books.

The Best Vampire Chronicle Yet!

Published by Thriftbooks.com User , 24 years ago
I've been a loyal Anne Rice reader (and vampire fan) for some time now, and it all started with this book! Rather than the usual run down vampire plot (in which a normal person is transformed unwillingly into a vampire and has trouble coping) or the "classic" horror movie motif (usually along the lines of a psychotic vampire terrorizing everyone on his mad and seemingly pointless killing sprees), Anne Rice has pulled through with a truly innovative plot from deep whithin the regions of imagination. The Tale of the Body Thief is the story of a once powerful and headstrong vampire who finds himself with the prosect of becoming human again. He readily accepts the mysterious stranger's offer and recieves what he has always wanted- or has he? Lestat soon realizes that being human isn't all wonderful moments and experiences. He finds himself longing for his strong vampiric body back, only to find that the man he traded bodies with has reneged on their agreement and decided to keep his body after all. Lestat now finds himself in unfamiliar territory- unable to defend himself. All the more determined, he calls upon the help of an old friend, and all of his tricks and cunning. Filled with magic, chases, and friendship, The Tale of the Body Thief leads both characters and readers on an adventure that is sure to change their perspectives forever

Getting under the skin of the vampire Lestat...

Published by Thriftbooks.com User , 24 years ago
Of The Vampire Chronicles, this is my absolute favourite. They are all magnificent books, but this one is a bit different than the others. It focuses even more on Lestat, his mistakes which always leads him into great adventures, and on his friendship with David Talbot. When the story begins, Lestat is tired. He is not sure whether or not he wants to live. Infact, he tries to take his own life, but fails. This doesn't make him feel any better... Then this Raglan James comes forward, and gives Lestat an offer; he wants them to switch bodies... For three days, Lestat could be human again, if he agrees to the offer given by Raglan James. Of course, it would be irresponsible to let a human use a body as strong as his, Lestat thinks, but still he is tempted. Well, Lestat isn't known for always being responsible and thinking about the consequences, and so he accepts. And what happens? Raglan James escapes with his new vampire body, and Lestat is stuck inside a human body. Some way, he has to get his own body back... This book is truly brilliant, it has everything! As soon as you start reading, you're stuck. I read it in two days, almost without eating or sleeping during the time. You really fall in love with Lestat, and his neverending mistakes.... Read this book, you will not regret it!
Copyright © 2020 Thriftbooks.com Terms of Use | Privacy Policy | Do Not Sell My Personal Information | Accessibility Statement
ThriftBooks® and the ThriftBooks® logo are registered trademarks of Thrift Books Global, LLC