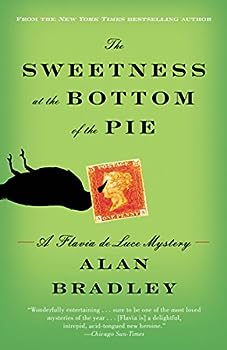 The Sweetness at the Bottom of the Pie: A Flavia de Luce Mystery

WINNER OF THE AGATHA - ARTHUR ELLIS - DILYS - DEBUT DAGGER AWARDS "Wonderfully entertaining . . . sure to be one of the most loved mysteries of the year . . . Flavia is] a delightful, intrepid,... This description may be from another edition of this product.

Published by Grace O. , 1 year ago
The condition of this book was excellent and it got here very quickly. The actual story is incredible and is one of the most amazing mysteries I’ve ever read. It’s written from the perspective of a 12-13 year old girl and can be read and enjoyed by kids and adults alike.

Published by RS , 2 years ago
The story itself is fantastic and I have all the books now, but I’m giving a 5 star story 3 stars because they sent me the wrong thing. While the book itself was in good condition and sent in a timely manner, I ordered hardback and was sent a paperback.

There's a new girl in town-move out of the way Nancy Drew!

Published by Thriftbooks.com User , 13 years ago
For a kid like me who grew up on Nancy Drew and always harbored a lingering desire to follow in her footsteps "The Sweetness at the Bottom of the Pie" was a truly delicious little mystery that I'll admit had me fantasying I was the main character-or at least her best friend. Because who wouldn't want to be Flavia de Luce? She's very smart, is as competent as fully educated adult chemistry and knows poisons like the back of her hand, is independent on her bicycle and to be perfectly honest-in situations where most eleven year olds would be completely terrified-she's just thrilled at the excitement. Did you catch the part where she's eleven years old? Growing up without a mother (dead in a tragic mountaineering accident) Flavia has learned to tip-toe around her reclusive father (and to torture her two older sisters with the occasional non-lethal concoction) but when she finds a dead stranger in the cucumbers- who she just happened to spy her father arguing with the night before- it's time for a serious investigation-not only into the dead man in the garden, but into her father's past. And what Flavia finds leads her to tragedy in the past, a stamp that collectors everywhere would salivate for and real danger on her own doorstep. Flavia is already one step ahead of the police-but can she stay ahead of the killer? This is a really awesome book. Written in first person Flavia literally leaps off the page (or maybe she pulls you into the book with her) and takes you along an incredibly intelligent, funny, dramatic and mysterious adventure. This is a book that kids and parents could read together-or separately-and belive me it's rare to find a mystery that spans the age gap. Also the setting in just Post WW2 rural England makes an excellent backdrop. It feels slightly disloyal to say this but you, Flavia, with your quirky, funny, slightly malicious and always genius tendencies are just so much cooler than Nancy Drew. Five Stars.

King George is not a frivolous man (4.5 stars)

Published by Thriftbooks.com User , 13 years ago
Yes, this is a book written for grown ups and yes, the main character is 11 years old. Flavia de Luce has a passion for poison, the vocabulary of an adult, and a bicycle named Gladys. Her mother died climbing mountains in the Himalayas and her father, Colonel de Luce, is just about as distant, showing more interest in his stamp collection than his daughters. It's part of the whole English reluctance to show affection and keeping a stiff upper lip, or something like that... But things get shaken up a bit when a dead blackbird shows up on the porch at Buckshaw (the old mansion where the de Luces live) with a penny stamp stuck to it's beak. The next morning Flavia finds a dead man in the cucumber patch - well, he's not dead yet, but expires with a final word: "Vale." But who was he, and more important, who killed him? Was it the Colonel who had secretly argued with the stranger the night before, or Dogger, the dependable but unstable gardener (who still suffers from his experiences in Japanese POW camps)? Maybe he died from eating a slice of Mrs. Mullet's horrible cream pie? Whoever it was, Flavia is determined to find out with the help of her chemistry knowledge and Gladys. In spite of a slow start, this was really an enjoyable read. It has a style that reminded me of Alan Bennett's "The Uncommon Reader." It's what the English like to call "wickedly funny," which apparently means that it's funny in a clever and witty way with a good helping of subtle sarcasm. And it's certainly all of those. My 15 year old son quickly read it (he has this habit of snagging any book I order and reading it first, which I wouldn't mind except he doesn't feel the need to treat them as gently as I would prefer!) and loved it, so even though it's written more for grown-ups (don't worry, there's nothing inappropriate here!) older kids will probably enjoy it just as well (most of it would just go over the heads of younger kids). My son and I are looking forward to another slice!

Published by Thriftbooks.com User , 13 years ago
This was a very enjoyable story. The main character, Flavia, reminds me of Harriet the spy. She is a budding chemist and young sleuth intent on solving multiple mysteries tied to her home and her family. There are a number of fun and interesting characters surrounding Flavia which include her father, two older sisters (with whom Flavia is constantly bickering), a cook and a gardener. Flavia's mother died when Flavia was one, but she is still very much a part of the story. And I particularly like that Flavia's bike is named Gladys. It's a nice touch to bring out the innocence and ignorance of the young detective. The book was well written and it was very quick to read. It wasn't a complicated plot and it was easy to sail right through the chapters. It grabbed my attention from the beginning, but didn't require a lot of concentration. I had to remember throughout the story though that Flavia is only 11 years old so it's easy to understand how a novice could make mistakes or overlook important details. I heard the next book in series is complete and a third is in process, so I will be looking forward to reading those.

Published by Thriftbooks.com User , 13 years ago
Alan Bradley has crafted a great read in "Sweetness at the Bottom of the Pie." Flavia, the main character, is a fascinating young chemist/detective. Before I began reading, centering a story on around a child detective struck me as an odd choice. However, once I started the book, I found that Flavia's youth and wit were an excellent combination for a literary sleuth. Because of her youth, apparent clues that she has (temporarily) failed to notice can be forgiven by the reader. Because of her sharp mind, it is believable when she pieces a solution together using bits of information that may have been overlooked by others. While she occasionally drifts toward a dark personality, I found Flavia to be an extraordinarily interesting and likable character. The mystery unfolds at a good pace. I was well into the book before I began to catch on to the solution, and even after I had figured out the probable culprit, I was still glued to the pages while Flavia went to work sorting out the details. If one were to nitpick, there were two small passages that were mildly irksome. One involved a sibling squabble that ended with an accusation of being adopted. It was an unnecessary part of the story, and using the concept of adoption as a threat or a curse, even in an argument between children, is tiresome. The second is a brief discussion involving a mock Chinese accent, recounted with stereotypical "r - l" substitutions. However, both of these issues were minor, and easily forgiven based on the quality of writing and wonderfully developed characters. I enjoyed the book tremendously and hope to read more adventures of Miss Flavia de Luce in the future.
Trustpilot
Copyright © 2022 Thriftbooks.com Terms of Use | Privacy Policy | Do Not Sell or Share My Personal Information | Accessibility Statement
ThriftBooks® and the ThriftBooks® logo are registered trademarks of Thrift Books Global, LLC