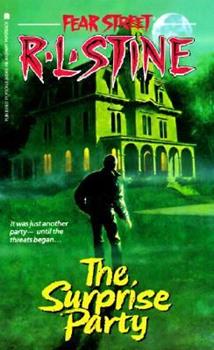 The Surprise Party (Fear Street, No. 2)

(Book #2 in the Fear Street Series)

This description may be from another edition of this product. It's been a year since Evan died in the Fear Street woods. A year since Ellen moved away, and "the gang" split up. Meg Dalton felt as if she'd lost her best friends. Everyone changed. Even her...

This party holds some deadly surprises...

Published by Horror crazy , 1 year ago
The Surprise Party was only R.L. Stine’s second Fear Street book, but it was already a slight improvement over The New Girl, regardless of the fact that the first book is one that I really like a lot. This spine-tingling tale is about Meg, who decides to throw a surprise party for her friend, Ellen, who has returned to Shadyside two years after her boyfriend was killed in a suspicious hunting accident in the Fear Street woods. Someone, however, doesn’t want Meg to throw the party, as they make frighteningly clear through chilling phone calls and other nasty, sometimes deadly, surprises that they have in store for her. Who is it that doesn’t want the party to happen? Will Meg live long enough to have the party? For fans of this series, The Surprise Party delivers more of the terrifying ingredients that characterize most Fear Street books: Terror, suspense, romance, twists, turns, mystery, and characters who are just well-drawn enough to help tell a thrilling tale of horror and do it well! Fear Street fans who haven’t yet read this one should do themselves a favor and attend R.L. Stine’s surprise party—where the only thing scarier than the surprises is how unpredictable they are!

"Dwayne was a first-class sleazoid creep."

Published by RV The Book Slayer , 1 year ago
In this second installment of the Fear Street series, Meg plans a surprise party for her BFF, Ellen, whom is visiting for the first times since she moved away suddenly after the death of her boyfriend, Evan. Not everyone thinks that is such a great idea. She has someone calling her house with threats unless she cancels the party. Rather than cancel, Meg investigates. Who could it be? Brian, her weird cousin, is obsessed with the RPG Wizards and Dungeons. Her boyfriend, Tony, has been acting weird since Evan's accident. Ellen herself? I mean she hates parties. But when Ellen and 4th Level Wizard Brian team up to bring Evan back, the surprise party surprises everyone. Dislikes: Meg's reaction to Tony and Ellen. ⭐⭐ for being entertaining .25 🌠 for a nerdy RPG character .25 🌠 for the ending .25 🌠 for nostalgia

Published by Thriftbooks.com User , 16 years ago
A psychotic killer has just murdered a boy named Evan in the Fear Street woods and has gotten away with it. It is now a year later and Meg Dalton is living her life peacefully with her close friends Shannon, Lisa, and boyfriend Tony. One day, Lisa informs Meg that Ellen is coming back to town. Ellen was Evan's girlfriend and one of Meg's closest friends, and once he died, Ellen left all her friends and moved elsewhere. Meg decides that she should throw a surprise `Welcome back!' party for Ellen, so that Ellen doesn't feel awkward about her visit. However, someone else is insistent on making sure that the party doesn't take place, even if it means killing Meg. As we progress with the story, we make a list of suspects who could be threatening Meg from organizing the party. They are: 1) Meg's best friend Shannon: Shannon is Evan's sister, and doesn't like Ellen because of it. 2) Meg's cousin Brian: Who was in the scene of the crime a year ago, and has been acting strangely ever since 3) Meg's boyfriend Toby: Toby seems more distant after the Evan's death since he and Evan were close friends. It's always fun reading a thriller where you are trying to figure out who the killer is. R. L. Stine once tells us a gruesome story (which is a little farfetched) of a girl trying to solve the identity of the person who is after her. This book had a lot of twists and turns in it, especially in the end, which made it a worthwhile read. In conclusion, you won't be disappointed by reading this Fear Street book.

One of Fear Street's Best!

Published by Thriftbooks.com User , 21 years ago
The Surprise Party is probably one of the best books in the whole Fear Street series. It is funny, scary, suspenseful, and has a great storyline. It is about a girl named Meg that throws a surprise party for Ellen, her old bestfriend, because she is coming to visit. But then Meg receives phone calls telling her to cancel the party or else. Then the party invitations get cut up. Then comes the note in her locker and then the red paint thats supposed to be blood in her lunch bag. Could it be that Ellen is coming to town? Is it just a prank? Or does it have something to do with the murder of Evan a year ago? Meg must find out. This book is really fabulous. I am certain that every pre- teen will love this book as much as I did. Read it sonn or you'll be mad you didn't. Remember, you're in for a scare!!!

Published by Thriftbooks.com User , 22 years ago
I recomand this book to anyone 11 or older. It's great! The party was very scary though. all I wanna say, is I loved it. READ It!!!!!!!!~Anna

Published by Thriftbooks.com User , 23 years ago
This book is great for any teenager who loves mysteries like me. R. L. Stine leads you to think it's someone and then someone else. It's such a great book that you don't ever want to put down

Published by Thriftbooks.com User , 23 years ago
This was the first Fear Street I read. I was only 11 and now I'm 13. I read it while I was on vacation and I kept thinking that I'd see the characters of the book in my hotel room.READ IT!!! It is great.
Copyright © 2020 Thriftbooks.com Terms of Use | Privacy Policy | Do Not Sell My Personal Information | Accessibility Statement
ThriftBooks® and the ThriftBooks® logo are registered trademarks of Thrift Books Global, LLC