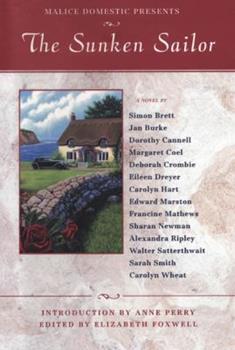 The Sunken Sailor (A Serial Novel)

by Elizabeth Foxwell and Malice Domestic

During a weekend house party in a proper English village, a body is discovered at the bottom of a pond tied to a submerged statue of Neptune. And the weekend has only just begun. So has this ingenious mystery-a literary game of round robin in which fourteen master crime writers have each contributed a chapter of their own. What they deliver is a wildly entertaining whodunit with as many dizzying twists, turnabouts, double-crosses, and divergent styles...

Published by Thriftbooks.com User , 17 years ago
Between the world wars, the aristocracy tries to return to what they once had. In Rutfordshire, Daisy the Dowager Duchess of Faughstrayne hosts a weekend party with an eclectic assortment of guests. Among the attendees are wealthy American Admiral Cornelius Brandon and his son Whitchell, and the Duchess? neighbor Sir Gerry. The latter finds the murdered corpse of the Admiral.Sir Gerry considers himself an amateur sleuth so he decides to investigate the situation after notifying Chief Inspector Reggie Arbuthnot of the homicide. Reggie wants Sir Gerry to stay out of the case except as a witness because he is jealous that the amateur always solves cases before he can.Sir Gerry finds the body of the next victim Consuella, the new Duchess of Faughstrayne. More deaths follow and soon Reggie realizes that several of the guests are not what they seem and also have motives, but which one would kill still remains unsolved.THE SUNKEN SAILOR is a round robin work in which fourteen authors provide a chapter that leads to the next writer?s segment. This results in many unexpected twists and turns in a plot that showcases several different writing styles that somehow blends together into a fine cohesive storey line that is a treat for readers.Harriet Klausner
Copyright © 2022 Thriftbooks.com Terms of Use | Privacy Policy | Do Not Sell My Personal Information | Accessibility Statement
ThriftBooks® and the ThriftBooks® logo are registered trademarks of Thrift Books Global, LLC