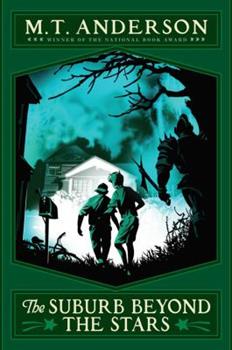 The Norumbegan Quartet #2: The Suburb Beyond the Stars

(Book #2 in the Norumbegan Quartet Series)

The fun and fantasy continue with bestselling and award-winning author M. T. Anderson. You haven't seen strange until you've seen what Brian and Gregory are up against.... Something incredibly strange is happening. It's not The Game of Sunken Places-Brian and Gregory have been through that before. But still...strange creatures have begun to chase after them. And Gregory's adventurous cousin Prudence has disappeared. When Brian and Gregory go to the...

Readers will be knocking on doors asking for the sequel

Published by Thriftbooks.com User , 11 years ago
Brian and Gregory thought that Brian had won The Game of Sunken Places, the high-stakes real-life board game that pitted Brian (as the representative of the elfin Norumbegans) against Gregory (representing the evil Thusser Hordes) in a strategic battle for dominion over the Earth --- or at least parts of Vermont. Now that the balance has been restored, all they have to do is work on designing the next round of the Game, due to be played by someone in the next generation. Unfortunately, the Thusser Hordes don't want to wait that long, as Brian discovers when he is trailed by a suspicious stranger and then nearly devoured by a vicious demon on the subway near his home in Brookline, Massachusetts. After escaping, he and Gregory try to call Gregory's cousin Prudence for advice, but Prudence isn't answering her phone. Or her email. So they have little choice but to head back to where the Game began --- the wilds of Vermont. A few things have changed since they were last there, though. Where once Prudence's house was an isolated cottage surrounded by deep woods, it has now been engulfed by a fast-growing suburban development. At first, the boys welcome the presence of witnesses ("Much harder for us to be torn apart by ogres if people are playing Wiffle ball in our backyard") and are initially reassured by their normal-looking neighbors ("You wouldn't think that evil from beyond time would wear chinos"). But the more time Brian and Gregory spend in this suburb, the more it strikes them as deeply, deeply odd. The kids on the block ride their bikes in circles all day and all night. No one seems to know what time, or even what day, it is. Neighborhood soccer games turn into tragic, weepy affairs. And the local real estate developer is a guy who has been dead for quite some time now. If this isn't just a quaint suburb sprouting out of the Vermont woods, could it be part of a nefarious plot by the Thusser Hordes to return to power? Maybe even to take over the world, one cul-de-sac at a time? Brian and Gregory aren't sure what kind of game they're playing anymore, since all the rules have been bulldozed much like the trees on these newly-developed lots. Fans of THE GAME OF SUNKEN PLACES will be thrilled that M. T. Anderson has published a follow-up adventure at last. Some of readers' favorite characters reappear, particularly the well-meaning troll Kalgrash, who, since the previous novel, has been modified to fit a medieval suit of armor. This time around, he's enjoying using vocabulary to match his metal wardrobe and battle-axe, screaming about smiting and varlets. Some fans of the bad-tempered Wee Sniggleping may be disappointed at his mere cameo in this book, but you better believe he makes every word count. On the surface, THE SUBURB BEYOND THE STARS is a rousing good adventure, complete with hideous monsters, brainwashing experiments, and the walking dead. But there's also a lot of serious thought hidden beneath the green lawns and carnivorous house
Copyright © 2020 Thriftbooks.com Terms of Use | Privacy Policy | Do Not Sell My Personal Information | Accessibility Statement
ThriftBooks® and the ThriftBooks® logo are registered trademarks of Thrift Books Global, LLC