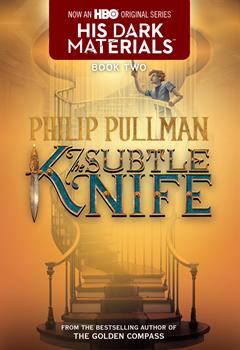 HIS DARK MATERIALS IS NOW AN HBO ORIGINAL SERIES STARRING DAFNE KEEN, RUTH WILSON, ANDREW SCOTT, AND LIN-MANUEL MIRANDA The spellbinding sequel to The Golden Compass, the modern fantasy classic that Entertainment Weekly named an All-Time Greatest Novel and Newsweek hailed as a Top 100 Book of All Time, continues the epic adventure, catapulting readers between worlds, and toward a devastating discovery. Lost in a new world, Lyra finds Will--a boy on...

Published by Kimberlee , 2 years ago
I enjoy the author. The stories are well written.

Published by Thriftbooks.com User , 14 years ago
Philip Pullman's "His Dark Materials" trilogy kicks off with a bang with "The Golden Compass" and shows no signs of flagging with volume II, "The Subtle Knife." Just as "The Empire Strikes Back" elevated the "Star Wars" series into the pantheon of great film series, "The Subtle Knife" builds upon the brilliant foundation of Book I and dives deeper into Pullman's rich tale of courage, love, and the battle for salvation. Lyra, 12-year old tomboy, was the heroine of "The Golden Compass," and in Book 2 she finds a worthy hero to share the spotlight in young Will, a twelve-year old murderer. Lyra's alethiometer tells her that he's a murderer when they cross paths, and it is due to Pullman's brilliant writing that Lyra takes that as a sign that she can trust Will - and it makes sense. For Lyra is still in grave danger as she struggles to find her father, Lord Asriel, after he murdered her friend Roger in order to advance his own ends, which are known only to him. All Lyra and Will know is that their worlds have been torn asunder, which is what brings them together. Will occupies a world much like our own, and unlike Lyra, he does not have a daemon flitting about beside him. Lyra overcomes her initial disgust of Will's deformity, and soon they are allies as they explore a new dangerous world, where soul-sucking Specters, angels, and witches vie for supremacy with humans. Will, like Lyra, searches for his father, but unlike Lyra, Will wants to find his father not for revenge, but for love and answers. Unlike Lyra, whose evil mother Marisa Coulter wants to kill her, Will's mother is defenseless and sick, so Will must shoulder the burden of protecting her as well. Pullman balances these dark storylines - that would crush so many children - with realistic depictions of these two kids. For all their heroics, neither Lyra nor Will ever ring false. Look for plenty of action, joy, loss, and abject sorrow in "The Subtle Knife." The title comes from another wondrous Pullman creation, a knife that can cut through the fabric in between parallel universes, but only in the hands of someone who knows how to use it. Will and Lyra narrowly escape danger after danger as they proceed toward their common destiny, one that will shake the fabric of all the worlds of creation. This 10th-anniversary edition is a handsome hardcover edition, but is probably not essential to enjoy the series. It's high-quality, complete with placeholder ribbon and special illustrations in the appendix, but Pullman's story is so darn good that a mass-market paperback would do you just fine. This edition is best-served so you can proudly display this novel on your bookcase so you can introduce your friends to this wonderful series of books.

Setting the stage for the final novel

Published by Thriftbooks.com User , 15 years ago
The 2nd novel in the His Dark Materials trilogy, I found that the first half of the book didn't quite live up to the expectations created by The Golden Compass. Though, the second half of this book tied everything together well and seemed to be more consistent with the overall feel introduced in the first novel. But, as argued by many for most trilogies, and I agree, this is usually the intention to set up the final act. This was clearly Pullman's intention, as it introduces characters and scientific concepts that seem to be necessary to intelligently explain and conclude the story arc. Also, the book finally breaches the controversial threshold that many consider to be its core ant-religious theme. Personally, despite the the fabric of fantasy Pullman has woven, I can understand why many have been concerned for their indoctrinated children's beliefs. Considering the Hollywood requirement to downplay these anti-religious concepts down, I honestly find that it would be quite difficult to translate this story into a film. Outside of this I really enjoy Pullman's style and have found the worlds created enticing. It didn't leave the impression on me that The Golden Compass did, but it satisfied my interest and built enough momentum to move forward into the final book in the series.

Published by Thriftbooks.com User , 22 years ago
I thought the subtle knife and Golden Compass were in fact absolutely wonderful. Philp Pullman is one of the few writers (of any genre) in the past two decades who actually knows how to write and tell a story. The writing is lyrical and breathtaking. Having extensively read and analyzed Paradise Lost throughout my college career as an English major, I was nothing short of amazed at how well His Dark Materials Trilogy followed Milton's great work. Due to this, unlike some of the past reviewers however, I was actually expecting many of the controversial themes in the Subtle Knife before I even read teh Golden Compass just by the passage from Paradise Lost at the beginning. I will fully acknowledge that in the Subtle Knife, Pullman discusses a rebellion against God. He seems sympathetic and even at times advocates the actions of Lord Asriel. He questions the judgement of God and the intolerance of the Church, and yes we are to some degree supposed to relate it to the our own society. Though even just picking out these themes is not a strong reading of this work. My recommendation, if you don't see where this is headed...READ PARADISE LOST! Milton does the exact same thing in his magnificient work. Paradise Lost deals with the rebellion against God, and at times Milton shows sympathy to Satan (in fact the most compelling interpretation is that Satan is the hero of the book), and constantly questions the judgement of God and the Church. Even though Milton was a Christian and made that clear throughout his work, he still kept the ambiguity between Good vs. Evil. And 300 years ago, Milton was extremely controversial for his views (in fact, a lot of the same criticisms against His Dark Materials Trilogy were almost the same as they were 300 years ago in the Milton Controversy). In the Golden Compass, Pullman gave the a notion of Good vs. Evil, in the Subtle Knife, he confuses these issuse, in the Amber Spyglass, will he set the record straight? Honestly, if he follows Paradise as well as he had, probably not. I do think, like Milton, Pullman has made it obvious from the Golden Compass that he sides with Lyra (Milton sides with Adam and Eve and mankind) on her quest to stop her parents in mounting the "rebellion against God", but he will still question God's judgement like Milton did. His Dark Materials Trilogy is a story of a possible second Fall of mankind. It is a very beautiful work of fantasy. It also discusses themes as friendship, love and truth and of course it provokes thought on both the part of the reader and the characters -- and that is the point of a book (not to mimic a reader's point of view) I am very curious to see how Pullman deals with these issues in the Amber Spyglass. I wouldn't be surprised if he explores another thought-provoking theme of humility of Lyra, mankind, and the Church for them to regain Paradise...

A worthy successor to "The Golden Compass"

Published by Thriftbooks.com User , 25 years ago
When Dickens' novels were first serialized, anxious crowds gathered at American docks, waiting for each fresh installment from across the ocean. Readers of Philip Pullman's "The Golden Compass" have found themselves similarly looking across the water for its sequel, and after an eighteen month wait "The Subtle Knife" has finally arrived. "The Subtle Knife" is the second installment in the "His Dark Materials" trilogy, in which Pullman has created an alternate universe nearly as vivid and credible as our own. Whereas "The Golden Compass" was set in a parallel world in which bears talk and witches fly, the action of its sequel occurs primarily in our own world. The book introduces a new protagonist, Will Perry, who joins the heroine of "The Golden Compass," Lyra Belacqua, in an eschatological quest for the nature of "Dust" -- subatomic particles which correspond to the mysterious dark matter of modern astronomy. Will and Lyra meet in Cittagazze, a frightening world in which spectres suck the souls from adults, and thus the only fear children have is of growing up. Reviewers of "The Golden Compass" made inevitable comparisons to Tolkien's "The Lord of the Rings" trilogy. While it is difficult for any fantasy book to escape the long shadow of Frodo Baggins, the Dark Materials series admirably avoids the painful kitsch that so often mars Tolkien's work; Pullman's characters seldom burst into song or sigh as they contemplate a noble past where men and elves walked tall and... well, one gets the picture. Indeed, what sets Pullman apart from so many fellow fabulists is his respect for restrained, inventive language. For instance, the following passage describes a spell of invisibility: "True invisibility was impossible, of course; this was mental magic, a kind of fiercely held modesty that could make the spell worker not invisible but simply unnoticed." I resisted the initial temptation to review the book immediately upon completing it; rather, I passed it off to a friend to compare her reaction with mine. We were in agreement on the verdict: "The Subtle Knife" ranks among the best modern books written in any genre. It is that good.
Trustpilot
Copyright © 2022 Thriftbooks.com Terms of Use | Privacy Policy | Do Not Sell or Share My Personal Information | Accessibility Statement
ThriftBooks® and the ThriftBooks® logo are registered trademarks of Thrift Books Global, LLC