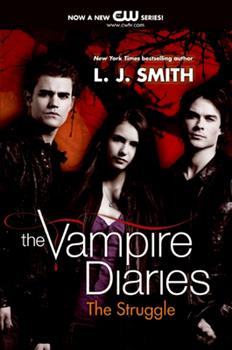 The Vampire Diaries: The Struggle

The second book in the New York Times bestselling series by L.J. Smith. This special paperback TV tie-in edition of the second book in L.J. Smith's New York Times bestselling The Vampire Diaries series features cover artwork from the hit CW TV show based on the book, starring Nina Dobrev, Paul Wesley, and Ian Somerhalder. Elena Gilbert is quickly realizing that the only thing more dangerous than being in love with a vampire is being desired by two...

Published by Jamie , 7 months ago
I am looking forward to reading these again. I read them in high school in the nineties. I am hoping I can get my teenager daughter to read them after she has watched the show six times over.

Published by Thriftbooks.com User , 19 years ago
Everybody out there; I order you to READ THIS BOOK! It was the best vampire book I have ever read! I fell in love with the characters and the constant tension and twists kept me reading for hours. The plot is brilliant and I'm now officially addicted to L.J Smith's books (and they're vampires). I really felt for the brave and beautiful Elena, and Stephan is so handsom and sad it made me want to cry. But the character I love the most is definatly Damon, the evil and incredibly sexy evil vamp brother. I don't know about you, but I always fall for the bad guy, and this one is definatly HOT!!!And man does the end have a twist! It's totally brilliant and it's even exciting me (the girl who wants Elena to choose the bad guy over the good). So trust me (the girl with style) and READ THIS BOOK!!!

The best book by LJ Smith

Published by Thriftbooks.com User , 22 years ago
This book is great. I have read a lot of books by LJ Smith, who is my favourite author, and this is the best. It even beats the whole Night World sereis, but narrowly. The characters are really vivid: unsure Elena, psychic, romantic Bonnie and refined Meredith. Stefan and Damon Salvatore, the two vampires competing for Bonnie, are both ruthless yet compassionate, and you never know which one is on the right side...

Published by Thriftbooks.com User , 24 years ago
I wish that I could just get a copy of VAMPIRE DIARIES. I mean, I borrowed the books from a girl whose dad is my mom's dancing teacher (I know, who wants to know 'bout this). Too bad the books are either out of print or the publisher is out of stock. I wish they'd just print more copies.Anyway, VAMPIRE DIARIES is about Elena Gilbert(one of the main characters), who meets a new, mysterious foreign student, Stefan Salvatore. But what nobody knows is that he is a vampire. Elena is the average high school beautiful, popular girl who gets every guy she wants, and this time she wants Stefan. Unfortunately, Stefan doesn't respond to her charms, 'cause Elena reminds him of Katherine, the vampire that made him 500 years ago in Florence, Italy (the current setting is in Fell's Church, Virginia). Elena and Kathering both look like (they could have been twins). To make details shorter, Stefan finally gets hooked up with Elena when he discovers she's in danger by Tyler, a local bully. Then, Damon, Stefan's older, even more mysterious, vampire brother makes himself known to Elena (even Stefan doesn't know that Damon is in Fell's Church). Damon, like Stefan, became attracted to Elena (the brothers fought over Katherine too, 500 years ago, but in the end, Katherine died - she chose both of them, and when they both didn't want to share her, she went out into the sun and took off her talisman, a special kind of ring that lets vampires go out into the sun - even though the sun can still hurt their eyes), and wanted to make Elena his "queen of darkness." Elena had a hard time chosing, but at the end, she chose Stefan. In the 3rd book, Elena became a vampire (there's an OTHER POWER - who is determind to kill Elena, Stefan, and Damon). It's Katherine, who only pretended to die before. Elena killed Katherine, but died too, in the process. Stefan heart broke.In book #4, Elena's back from the grave to help Stefan and Damon fight another evil - Klaus, one of the OLD ONES, the one who made ! Katherine a vampire. Stefan wins, and Elena (who's a spirit that time) has "to go." She goes, leaving Stefan, but first healing all his wounds from his fight with Klaus (she heals Damon and other human friends of hers that "knows"). Stefan is really sad, and then, Elena returns, somehow, as a human, and she and Stefan are reunited. What a happy ending! VAMPIRE DIARIES are one of my FAVE (I have so many favorites) books. Plus, I think Damon's pretty cool. LJS is one of my best authors now. I'm gonna start reading books from the Night World series now. Qian L.

Published by Thriftbooks.com User , 25 years ago
The second book in Smith's beautiful series, the beautiful, strong, and intelligent Elena Gilbert is drawn deeper and deeper in the world of vampires. She is struggling to hold on to one brother while resisting the other. Her boyfriend, a mysterious exchange student named Stefan Salvatore, has been accused of murder. While he and Elena try to clear him, they have to discover who the actual murderer is. They suspect it is Stefan's older brother Damon. Elena's diary has been stolen by her ex-best friend Caroline, who plans to use Elena's own words against Stefan. You'll never guess how she gets the diary back, the lengths she will go to to protect her family and friends, or what happens to Elena on Founder's Day
Trustpilot
Copyright © 2022 Thriftbooks.com Terms of Use | Privacy Policy | Do Not Sell My Personal Information | Cookie Preferences | Accessibility Statement
ThriftBooks® and the ThriftBooks® logo are registered trademarks of Thrift Books Global, LLC