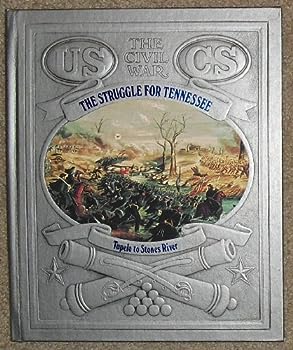 The Struggle for Tennessee: Tupelo to Stones River (Civil War)

Beautifully bound and illustrated volume on the Civil War featuring The Struggle for Tennessee, Tupelo to Stones River. This description may be from another edition of this product.

The Union fights to control Central Tennessee in 1862

Published by Thriftbooks.com User , 20 years ago
"The Struggle for Tennessee: Tupelo to Stones River" is the second of the volumes in the Time-Life Civil War series dealing with the Western Theater of the war after the Battle of Shiloh. Obviously this part of the war has never received the attention of the Eastern Theater where Lee's Army of Northern Virginia dueled the Army of the Potomac, so there is something intrinsically interesting about finding out more about what was happening out West. James Street, Jr. presents his subject as a war of maneuvers in and around Tennessee. After the capture of Corinth, Mississippi in May 1862, a portion of Major General Don Carlos Buell's Union army was dispatched towards Chattanooga, the critical railroad center that was the gateway to Georgia. However, Confederate armies under Generals Kirby Smith and Braxton Bragg moved from Eastern Tennessee into Kentucky to threatened Louisville and Cincinnati. After a drawn battle at Perryville, Kentucky on October 8, Major General William Rosencrans succeeded Buell and that December left Nashville to fight Bragg's reorganized Army of Tennessee near Murfreesboro, on the banks of Stone River. Street divides these events into five chapters: (1) Heyday for Raiders focuses on the guerrilla tactics of both sides, including James J. Andrews stealing the Western & Atlantic Railroad locomotive named the "General," and the raids of John Hunt Morgan. (2) Stumbling Towards Perryville covers the Confederates campaign to retake Kentucky, or at least stop the Federals from moving deeper into Tennessee, climaxing with the Battle of Perryville where both sides claimed victory. (3) Clash at Doctor's Creek has Rosencrans' bringing a new spirit to the Army of the Cumberland preparing them for the key battle in the campaign. (4) The Fight for "Hell's Half Acre" tells the details of the first half of Battle of Stones River outside Murfreesboro on December 31, where the Confederates turned the Union flank in on itself like a jackknife. (5) Across Stones River and Back completes the battle as the successful attack of the Confederates on the left Union flank succeeded in driving the Federals behind the river, where massed artillery fire staggered the Rebels and set the stage for a successful Union counterattack. With this victory, the Union forces could plan their move on Chattanooga. "The Struggle for Tennessee" is illustrated with the historic photographs, etchings and color sketches that have always been one of the richest parts of the Time-Life series. I appreciate the detail that Street is able to give to the Battle of Stones River, because by devoting two chapters to it he is able to elevate its significance in the Civil War in a way I have never appreciated before. The story of the Western Theater picks up in two volumes, one devoted to Grant's Vicksburg Campaign in "War on the Mississippi" and the other picking right up on this volume with "The Fight for Chattanooga."
Trustpilot
Copyright © 2022 Thriftbooks.com Terms of Use | Privacy Policy | Do Not Sell or Share My Personal Information | Accessibility Statement
ThriftBooks® and the ThriftBooks® logo are registered trademarks of Thrift Books Global, LLC