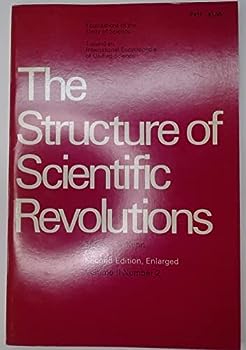 Thomas S. Kuhn's classic book is now available with a new index. "A landmark in intellectual history which has attracted attention far beyond its own immediate field. . . . It is written with a combination of depth and clarity that make it an almost unbroken series of aphorisms. . . . Kuhn does not permit truth to be a criterion of scientific theories, he would presumably not claim his own theory to be true. But if causing a revolution is the hallmark...

The Myth of Linear Progression

Published by Thriftbooks.com User , 21 years ago
I'm not sure if it is still the case, but there was a time when Kuhn's book was _the_ most frequently cited book in scientific literature. With all respect to my fellow reviewers, it might be a tad bit arrogant to dismiss such a book as "puerile."Before Kuhn, we were taught in school that scientific progress was linear, that it was an unending progression of refinements and developments, with one "truth" leading to the next "truth." Kuhn's insights including pointing out that such a linear progression was mostly a lie. His thesis was that the major developments in science were mostly revolutionary. That some "truths" turned out to be false. Astronomy was revolutionized by Galielo and Copernicus, and man was divested from the center of the universe. Physics was revolutionized by Newton. Biology and Darwin. It didn't hurt that plate tectonics came along shortly after Kuhn published, and Kuhn looked like his model was predictive, too.Part of Kuhn's impact, I have to admit, was a result of the time which the book was first published. In the middle and late 1960's, questioning authority was the heart of any undergraduate's thinking, and Kuhn's ideas were read by some as a license to question all authority.Perhaps as a consequence, Kuhn's model has been carried by other writers beyond all reason, with everyone from sociologists to New Age fuzzies usurping his terminology, making "paradigm shift" a nearly instant cliche. But his influence has gone far beyond those who want to mis-apply his ideas to everything from post-modern dance to sociobiology. Uniformitarianism has been bloodied, perhaps permanently. By geologists, evolutionists, archaeologists and more; the influence has been pervasive and real. Stephen Jay Gould may or may not subscribe to "Structure," but he has sure demolished uniformitarianism in evolution.I disagree with those who regard "Structure" as "the most important" anything. But it unquestionably has been stunningly influential, and any serious student of science or philosphy, I believe, will be reading this book a hundred years from now. And apart from its influence and impact, the book still reads well almost 40 years on. It's fun and, if you enjoy seeing the world stood on its ear, you'll like Kuhn's approach.

Published by Thriftbooks.com User , 22 years ago
This is the book in which Thomas Kuhn introduced his famous paradigm theory: scientists of the same discipline have a set of theories and practices in common, the so-called paradigm. In the normal course of scientific research, they do not question this paradigm, but apply it to solve new problems. This changes when the paradigm is found to fail consistently when it is applied to explain certain observations. This can lead to the appearance of a new paradigm, which eventually replaces the old one.The book is very well-documented. Kuhn amply uses examples from the history of science to illustrate his point, and you will not find a single statement that is not accompanied by the necessary arguments.Books like this are not easy to read, but this book is worth the effort. First of all, because Kuhn has an eloquent style. Second, because you do not need any prior knowledge in order to understand the text (although it might help). Third, and most importantly, because it gives a good picture of how science develops, how scientists behave. Of course no single picture of science can ever be perfect. Every philosophy of science highlights certain aspects of the scientific process, and leaves other aspects almost untouched. This book is no exception. However, if you read just one original work in this field, this is probably the best choice.

Published by Thriftbooks.com User , 23 years ago
This book is a classic and will be rememebered, those who give it less than five stars, I think, are experiencing intellectual panty creep because of Kuhn's assertion that science isn't fundamentally driven by the search for truth.The critics have a point, Kuhn's own theory can be used to place some of his arguments in context, in 1962 people thought truth was an easy thing to discover, I think the most conservative academic today understands how difficult it can be to pin a new idea down, how compelling is the desire to think that what we believe to be truth is, in fact, true.Kuhn's book was a milestone, one author's attempt to show that science is not ruled only by logic, there's a human element involved, and while I think he went overboard and wasn't the only person who took this approach I understand and respect and think readers will appreciate the contributions made by this book.
Trustpilot
Copyright © 2022 Thriftbooks.com Terms of Use | Privacy Policy | Do Not Sell My Personal Information | Cookie Preferences | Accessibility Statement
ThriftBooks® and the ThriftBooks® logo are registered trademarks of Thrift Books Global, LLC