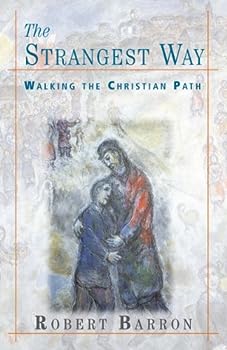 This description may be from another edition of this product. Is Christianity a bland, domesticated religion, unthreatening and easy to grasp? Or is it the most exotic, unexpected, and uncanny of religious paths? For the mystics and saints -- and for Robert...

Published by Thriftbooks.com User , 19 years ago
In "The Strangest Way: Walking the Christian Path," Robert Barron argues for a Christianity rooted in spiritual praxis, not abstraction. Barron believes that Christian spirituality - traditionally expressed in movement, practice, and apprenticeship - has been worn thin by accommodation to modernity and become a faint echo of secular culture or a privatized set of convictions. He regards the deculturalization of Christianity as beginning in the subjectivity, rationalism, and suspiciousness of Cartesian philosophy. This cultural mindset was in turn taken up by Christian apologists like Schleiermacher, Tillich, and Rahner who reduced Christianity to something best understood as interior, subjective experience.The antidote to this development, Barron believes, is a return to spiritual practices that celebrate the playful, embodied, patient, and irreducibly complex working of the mind. According to Barron, we must "plow, climb, will, act, decide, push our way" to insight. To embrace Christianity as a world and a form of life, Barron delineates three paths of spiritual practice. The first involves "finding the center" and is achieved by prayer, pilgrimage, use of religious articles, and fasting. The second, "knowing you're a sinner," is walked by means of confession, truth-telling, and forgiveness. The third, "realizing that life is not about you," is discovered through discernment, works of mercy, nonviolence, and liturgy.An especially attractive feature of this book is Barron's use of literature to exemplify and expand on his three paths. The selections are aptly chosen, with Evelyn Waugh's "Brideshead Revisited" used for the chapter on "finding the center," Dante's "Purgatorio" for "knowing you're a sinner," and Flannery O'Connor's "The Violent Bear It Away" for "realizing that life is not about you." Barron's analyses are generally well-done but there were several lapses. I question how one could write a detailed and extended explication of "Brideshead Revisited" without once mentioning there was a character called Lady Julia Flyte? Less serious perhaps, but something that has always bothered me about "The Violent Bear It Away," is the lack of emphasis on the drowning death of the young Bishop. By focussing only on Bishop's baptism by young Tarwater, Barron joins the author and other critics who don't delve into the subject of Tarwater's moral accountability for his death.One final observation that I feel compelled to make. In his otherwise brilliant treatment of "attachment" as addiction, Barron makes several disparaging remarks about "a culture that puts a premium on good feelings and attempts to deny and medicate depression." Only someone who has never experienced or observed the depredations of clinical depression could make a such an insensitive comment about the medications that allow otherwise ravaged persons to live productive and godly lives.
Copyright © 2020 Thriftbooks.com Terms of Use | Privacy Policy | Do Not Sell My Personal Information | Accessibility Statement
ThriftBooks® and the ThriftBooks® logo are registered trademarks of Thrift Books Global, LLC