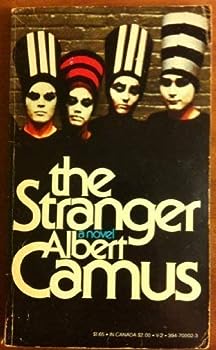 by Albert Camus and Alber Kamy

Through the story of an ordinary man unwittingly drawn into a senseless murder on an Algerian beach, Camus explored what he termed -the nakedness of man faced with the absurd.- First published in... This description may be from another edition of this product.

Published by Kat , 7 months ago
Haven’t read the book yet! But I order “like new” condition and there’s writing and anecdotes all over the pages. Be weary about that when purchasing

Published by Angry Derek , 9 months ago
Haven’t even read it yet but bought a “very good” copy and there’s an entire essay written in this thing. Almost every page has >5 marks and words scribbled in it.

Published by G’Anna , 11 months ago
this entire book was filled with a bunch of useless commentary and random underlined words that mean literally nothing. i’m sure this book is great but i can barely read it, the scribbling on each page is too distracting. guess i’ll be able to read it after i’m done erasing the markings on each individual page…

Published by Nathan , 1 year ago
The Stranger follows a character that can be seen as lacking conviction and apathetic. This character takes the reader through a consistent emotion of melancholy. We slowly watch his story unfold, a result of his sequence of unassertive decisions. Those that enjoy picking apart human emotion and beliefs in a philosophical manner will enjoy this.

Published by kat mercury , 1 year ago
by the time i was done reading it, i felt like the protagonist in the way i felt about this novel; i didn't think much of it, and i didn't really care much about the fact that i read it.

I bought this “acceptable” and I can’t read it.

Published by Lizos , 1 year ago
Every single page has writing and highlighting every other sentence 😐 I can’t finish it

So, I received the book;however, it's an ex library book which it wasn't listed as, or is it like ne

Published by David , 1 year ago
Too many ex-library books

Published by Tommy T , 1 year ago
What An Insightful Little Book!! Only Read This If It Seems Interesting If Not Pass It Up But Hey I’D Say This Was Good I Liked It And It Was A Book Just As Promised No Jokes Here.

Published by Sherri , 1 year ago
At a distance, it can be seen as topical and dry. The further you dive in, the more you see that it's quite the opposite. "Gentle indifference"... This book will set you free.

Published by Nee , 1 year ago
I don't particularly care for characters as apathetic as the narrator. It's a somewhat interesting character study, but lacks a certain depth. I will never take off stars for the condition of a book, I just wish the books were examined better. This one was full of writing and meaningless underlines.

I had to force myself to finish it...

Published by Meherg , 1 year ago
Sad story about a man without no conscience, no empathy, no guilt....I had to force myself to finish it...

Published by Readbooks , 2 years ago
I bought a "Good condition" book and received the worst used book ever. There are so many underlines which don't seem to be even important and comments(not really comments but just saying "too bad" "sad" which don't mean anything at all. I guess the previous book owner didn't even read this book and just wanted to pretend to read this book since there is a written note to someone(To.000, From.000) on the back side of the cover. (I have my 2 M.A degrees of English Literature)

The Stranger is worth getting to know

Published by Chaz , 2 years ago
I’ve probably lent this book to more friends that were interested than any other one I own. There’s a very distinct writing style and plot in a book that could be finished in one afternoon which makes it easy to pick up. The first chapter is probably the most boring, but once you get past that the story really comes into its own. Definitely a title worth saying you have read it without being insufferable to finish.

Published by Mac , 3 years ago
Such a great read that envelops you into a man's nihilistic perspective of the world and how it impacts his day to day life.

Published by Iguana0983 , 3 years ago
Day to day activities for a man that doesnt really care even up to the end. Good read.

Published by Thriftbooks.com User , 14 years ago
I am writing my report about a book called The Strangers. The Strangers setting is based a long time ago in France and it is narrated by Monsieur Maersault, reflecting on the end of his life. He is a man who keeps to himself and rarely shows emotion or that he cares about anyone or anything except Marie, and he lives in an apartment-like complex where he keeps to himself and has a feeling he is being followed. His close friends are Raymond, Mason and Marie. Maersault also has a friend, Secile, who owns a neighborhood restaurant. One day during the story Marie and Maersault were invited to Mason's house for a party. Mason owns a large house that has a large beach in the backyard. During the party, Raymond and Maursault walked down the beach, noticing two men had been following them, armed with knives. After they see this they returned back to Mason's. Later that day, Maersault goes back to the beach alone with a gun to see if the two men were still there. Sure enough the men were still there and as they approached each other Maersault made his fatal mistake. Maersault had shot the man dead. After this his life took a downward spiral until the end. He had to go to court, stay in jail, and couldn't be with Marie. After all this, he still had one more chance to prove he wasn't a monster to all the people, and to show his crime. Instead of proving them wrong, he spoke his mind and the truth and that was it. Nobody wanted to deal with him anymore so the court sentenced him to be executed. Inside Maersault was really sad but he still did not show it. Even though he knew his fate he didn't fear it. He managed to not care even though he saw the guillotine that was going to take his head. That was the end. I enjoyed this book because it was very interesting and I wanted to see what would happen to Maersault next.

Published by Thriftbooks.com User , 15 years ago
"Is my client on trial for having buried his mother, or for killing a man?" That question, asked toward the end of "The Stranger", will stay with the reader. Meursault lived a simple life, uncomplicated by extravagant emotion. And that--by judgment of his society--was his real crime. Chilling. And here is another question which may haunt readers: Just what emotions should one feel, and just exactly how strongly should they be felt? Careful, Camus may have said, your answers will be used against you.

Published by Thriftbooks.com User , 16 years ago
There are few opening lines in literature more famous than the ones that begin THE STRANGER: "Mamam died today. Or yesterday maybe, I don't know. I got a telegram from home: `Mother deceased. Funeral tomorrow. Faithfully yours.' That doesn't mean anything. Maybe it was yesterday." These lines are spoken by Meursault, who is the protagonist and narrator. Albert Camus uses Meursault as a symbol of the nihilism that was then sweeping a Europe that was engulfed in a conflict that promised only a continuation of the death and destruction that began with the Blitzkrieg in 1939. In such times of chaos, there was a tendency for Europeans to grow used to the thought that the next breath could be their last. A corollary of that was that if you bought into that philosophy, you also insisted in living in the here and now. Tomorrow existed only as an intellectual curiosity. Yesterday existed only as a prelude for today. Meursault is the embodiment of a generation of conquered French who learned to accept without a blink even the previously emotionally shattering loss of one's mother. Following his mother's death, Meursault quickly puts his mother's death and funeral behind him. He swims, dates, finds a lover, and kills a man for no logical reason. And all these events happen one after the other. He is arrested, tried, and convicted for murder. His execution is the penalty. Before, during, and after the trial a variety of people try to understand Meursault's life. Why did he show no grief at his mother's death? How could he so quickly go on with his life? And the biggie: Why did he kill his victim? No answer to any is given. And so the novel ends with a stunning epiphany by Meursault. As he awaits beheading, he perceives the relation between the universe and himself. The universe has no logic. Life has no meaning. The lack of logic in the universe guarantees that everything in the universe, including himself, is governed by chance, which means that any occurrence could just as easily not have happened as it did, thereby proving all that we see is an illusion of fact. In such a universe, as logic goes out the window, it takes meaning with it. Life and death and order and disorder are interchangeable. To be born means only to experience the NOW. There is no "after" the NOW. Death thus has no meaning for Meursault. Many readers of this and other novels of Camus call him an existentialist, a tag which he denied. Yet, in the inexplicable actions of Meursault, Camus paved the way for several generations of youth who even now shout out that today and tomorrow are synonymous.

Published by Thriftbooks.com User , 20 years ago
I'm not quite to the end of the book yet, but so far I love it. It's the only book I've been required to read for class that I actually enjoy reading.

Is this book the existentialist bible? No.

Published by Thriftbooks.com User , 21 years ago
The other reviewers base their interpretation of this novel on the belief that Camus was an Existentialist and that Camus presented Meursault as a hero. Concerning the last point, nothing could be further from the truth. Before interpreting "The Stranger", one should first read Camus' essays on his own personal philosophy of "The Absurd" and how he relates it to the myth of Sisyphus. These essays reveal that Camus' personal philosophy was distinct from Existentialism in that he imagined that Sisyphus could be happy even though he was condemned to roll a huge stone up a hill in Hades only to have it roll down again on nearing the top. Similarly, Camus believed that people could be fulfilled by searching for the meaning of life even though they know they will not be able to discover it. Consequently, Meursault is not a hero in Camus' eyes because Mersault has given up trying to find meaning in his life and accepts without struggle the lack of emotion and spirit in it. In other words, don't trust everything that was written on the back cover of the american paperback edition of this novel. The back cover contained incorrect information that misled many readers, including myself, about the true meaning of this work. Read Camus' "The Myth of Sisyphus and Other Essays" before interpreting "The Stranger" and new meaning will become apparent from this excellent and frightening novel.
Trustpilot
Copyright © 2022 Thriftbooks.com Terms of Use | Privacy Policy | Do Not Sell or Share My Personal Information | Accessibility Statement
ThriftBooks® and the ThriftBooks® logo are registered trademarks of Thrift Books Global, LLC