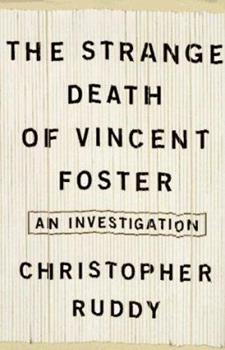 The Strange Death of Vincent Foster: An Investigation

Chronicles the possibly flawed FBI investigation into the death of a White House advisor in 1993.

Published by Thriftbooks.com User , 21 years ago
There is a reason why this book is so hard to find...there are people who dont want this information out there. I was glued to this book until I was finished. I always felt as if the story that the news media and the government gave us was acceptable until I read this book!

Excellent analysis of another government cover-up

Published by Thriftbooks.com User , 22 years ago
I found this book absolutely fascinating. The author is to be congratulated for his evidence-gathering and hard work. By writing this book Ruddy angered not only the usual sinister suspects in the Clinton administration, but also the small-minded neo-conservative clique at the National Review, Weekly Standard, and The American Spectator, who were just jealous that they didn't delve deeper into Foster's death from the start. Every day we are discovering the truth about US government complicity in the Waco massacre and One World Government, so it is only a matter of time before a Clinton crony comes forward with more irrefutable evidence of the Clinton regime's guilt in the Foster matter. Turns out the so-called "vast right-wing conspiracy" has been 100% correct all along! This book is highly recommended.

I not a Republican, but I still believe Ruddy

Published by Thriftbooks.com User , 23 years ago
Yes, it is true, Ruddy is "associated" with Right Wing "elements," and this has brought on the ire of The Democratic Party, and especially that funny-talkin' bald headed guy from Louisiana. But even if only 10% of the dozens of discrepencies detailed by Ruddy are true, the American public should clamor for a full-scale investigation. Like the "Zodiac" killings in California, there are too many things that 'just don't add up.'

Exhaustive for it's time, yet not up to date

Published by Thriftbooks.com User , 23 years ago
The book was exhaustive at the time of it's writing, but new examinations of the evidence have added new revelations to the case. This book will open the eyes of anyone who wants their eyes opened. I lays out all the evidence that (1) The Clinton white house manipulated the crime scene, and (2) obstructed the investigation. Where did all those crime scene photos go? Why did Nussbaum, Thomases, and Williams enter Vince Foster's office 18 times the eve after his death? Ruddy answers these and other questions with much detail. My only criticism of the book is that it seems to have been written hastily and is very disorganized.

Ruddy's book brings out the facts

Published by Thriftbooks.com User , 24 years ago
Christopher Ruddy has written a well-documented account of a very disturbing incident. You will no doubt be amazed at some of the facts that he mentions. For instance, Foster's eyeglasses were found about 20 feet from his body. Sounds logical: he must have thrown them before the suicide. But actually, the glasses had gunpowder residue on them. It was also claimed that Foster walked through Fort Marcy Park, which consists of a dirt path. Of course, no dirt or grass stains were found on Foster's shoes. The Park Police searched Foster at the scene and found no keys on him. But his 1989 Honda was parked there. Later, at the morgue, not one but TWO sets of keys were found on Foster. A nurse there said that Messrs. Livingstone and Kennedy arrived before the Police to identify the body. Or the gun. When Foster's wife was shown the gun, she said she didn't recognize it. I could go on and on. Read this book and find out the truth. It's an excellent piece of work.
Trustpilot
Copyright © 2022 Thriftbooks.com Terms of Use | Privacy Policy | Do Not Sell or Share My Personal Information | Accessibility Statement
ThriftBooks® and the ThriftBooks® logo are registered trademarks of Thrift Books Global, LLC