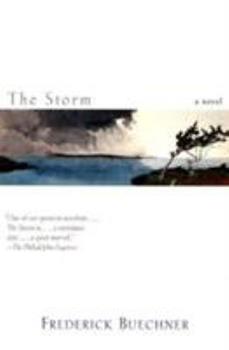 The Boston Globe calls Frederick Buechner "one of our finest writers." USA Today says he's "one of our most original storytellers." Now this acclaimed author gives us his most beguiling novel yet--a magical tale of love, betrayal, and redemption inspired by Shakespeare's The Tempest . On wealthy Plantation Island in South Florida, an old man waits, Kenzie Maxwell is a writer, a raconteur, a rascal, an altruist, a mystic--a charismatic figure who enjoys...

OH, THE STORMS OF OUR LIVES...

Published by Thriftbooks.com User , 19 years ago
One of Frederick Buechner's most compelling talents, for me, is his ability to create characters that are profoundly real and believable. In all of the novels by this author that I have read so far, this is a firm constant -- and one of his greatest strengths. Whether the setting is Biblical times (as in THE SON OF LAUGHTER or ON THE ROAD WITH THE ARCHANGEL), the mediaeval British Isles (as in BRENDAN and his Pulitzer-nominated masterpiece GODRIC), or present-day Florida (as in THE STORM), Buechner's characters are brimming with a wonderful humanity.THE STORM concerns the estrangement of two brothers, both now elderly. The central character, a writer named Kenzie Maxwell, is approaching his 70th birthday -- and the storm clouds are gathering around him, both figuratively and literally. His brother Dalton, whom he dismissed several years ago with a wish never to look upon his face again, is coming for a brief stay on the island where Kenzie and his wife Willow live. Kenzie has never forgiven his brother for -- as he sees it -- besmirching the character and spirit of a young woman named Kia, with whom Kenzie shared a brief affair and fathered a child (before his marriage to Willow). The affair caused a bit of a scandal at the time -- Kia was only 17, and Kenzie was already in his 50s, working at a shelter for homeless and abused children in New York City, where Kia had been a client. Kia died giving birth to Kenzie's daughter -- and the older man has never shirked his responsibilities toward her, seeing to it that she is raised in caring surroundings, treating her with love and respect. Part of Kenzie's anger at his brother is actually engendered by his own actions -- although he has a hard time realizing this. I think, deep down, he feels a lot of guilt over the events himself, and has a hard time not only admitting his guilt, but coming to terms with the actions he has taken in his own life.Kenzie's marriage to Willow is a sweet relationship -- one of the most gently fulfilling unions I've seen portrayed in literature. It's not a tumultuous passion that they share -- but there is love abounding in the form of kindness, respect and support, qualities that are too often nudged aside in stories in favor of heated sexual encounters. Their marriage is a quiet one, but strong, truly built upon a rock.Kenzie is best-known as an author for a book he has written several years before, documenting the lives of various saints. He has never considered himself to be a profoundly religious man -- he even looks with some amusement of the tactics employed by various subjects in his book in order that they might experience, reach, touch God. As he writes the book, however, he begins to feel more of a pull himself, and winds up living the rest of his life as a quietly spiritual person -- not trying to convince others of how to live their lives, but simply trying to live his own faith through his actions. His epiphany concerning the saints whose lives

Published by Thriftbooks.com User , 19 years ago
I believe that The Storm is a story of a completely dysfunctional family, but hope, faith and caring shine through despite so many histories and challenges. Buechner's novel examines his familiar themes about sin, grace, miracle, and reconciliation. This is a short novel. It makes no crashing pronouncement about human destiny. Instead, it reminds us of the struggle for meaning, recognition and connection with others that all of us are involved in, to find out where we belong. Our lives may not be as extreme as these characters, but what they feel and long for is universal. From my point of view Miss Sickert does partially redeem at the end of the novel. I believe she finds a hope and peace in her life, which persuades her to go on. She understands the true meaning of life as well as recognizing the faith.

suffused with a kind of quiet religiosity

Published by Thriftbooks.com User , 21 years ago
In addition to being the author of over 30 books, Buechner is an ordained Presbyterian minister and his writing is suffused with a kind of quiet religiosity. The characters seem to be searching for moral guidance and inner peace. They approach the world prepared for the miraculous to occur and, open to the possibility, they tend to perceive such miracles in the circumstances of every day life. The central character in this story is Kenzie Maxwell, who like Buechner is an author in later life. Twenty years earlier, at a time when he sensed an emptiness in his life, he began attending church and volunteering in the community. While working in a shelter for runaways (on whose Board his attorney brother served), Kenzie fell in love with a graffiti-tagging teenage girl named Kia. Unbeknownst to him, Kia died giving birth to their child in her tenement apartment. But when Kia's grandmother approached the shelter for help with the child, scandal exploded. Kenzie and his brother Dalton became estranged and Kenzie has spent the intervening years seeking absolution and providing for the care and raising of Bree, his daughter with Kia, who has become a professional dancer. Now he lives on an island with his wealthy wife Willow and, among other things, continues to attend church, volunteers with the elderly and works on writing a combination journal/apology to Kia. Therein, he describes his current life: I will continue to do penance, that's what I will do. I will continue to live off of my wife's money. I will continue to attend the eight o'clock service Sundays in my hooded blue sweatshirt and try to hear the voices of the saints through the Frog Bishop's amiable bromides. In short, I will go on playing, as I have for years, the feckless has-been they take me for with my unmentionable past and queer ways. That is my sackcloth and ashes. I will also, of course, continue to bring what succor I can to the very old because I'm not to be trusted ever, ever again with the very young. I never even trusted myself. As the passage demonstrates, he has accepted the harsh societal judgment about his relationship with Kia, even though the book makes it clear that they shared a mutual and nonexploitative love. Moreover, the daughter that they produced holds a special place in Kenzie's heart. One night in bed Willow asked him if he believed in miracles: ...his answer, mumbled drowsily through his mustache, was, 'Bree is a miracle.' He reached out one arm to turn off the light and then , lying there on his back with his eyes open, he tried to tell her what he meant. What he meant was that out of the forlorn and unnecessary death in the cold-water flat with only the hysterical grandmother in attendance, there had come life. It was as if Kia had managed to spray up her name in the most impossible of all places and in colors so fast that, with luck, it would be yeas before the weather or the passa

Published by Thriftbooks.com User , 21 years ago
A story of a completely dysfunctional family (but then, aren't we all?), but hope, faith and caring shine through despite so many histories and challenges. When the daughter asks her elderly father "What are you going to do, dear, now that you're so old. You made me sad when you said your life is like a computer you never found out how to work" I found myself in tears. Very moving story, of normal (and sometimes shallow) people. I'm looking for more reading by this author. My mid-life crisis must be preparing me for the late life angst!

Published by Thriftbooks.com User , 23 years ago
Frederick Buechner has the knack of delivering heartfelt messages in good writing but he doesn't write message books. His latest, "The Storm" is one of his best. It is the Shakespearean story of "The Tempest" set in contemporary New York and Florida with believable well-developed characters who don't have all the answers but will help you find some answers for yourself along the way.
Copyright © 2020 Thriftbooks.com Terms of Use | Privacy Policy | Do Not Sell My Personal Information | Accessibility Statement
ThriftBooks® and the ThriftBooks® logo are registered trademarks of Thrift Books Global, LLC