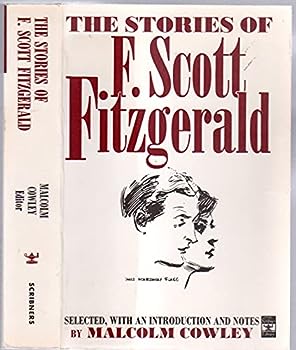 This description may be from another edition of this product. A collection of stories reflecting the colorful times and people that were familiar to the author.

Published by Thriftbooks.com User , 12 years ago
Superb fiction, superbly read. Even though this isn't available on CD or download, it's still a great choice. Transfer it to the media of your choice. Fitzgerald is a master, and these stories range from the fantasy of "The Curious Case of Benjamin Button" and "A Diamond as Big as the Ritz" to the difficulty of "May Day." The cast of narrators includes some of the best US actors around: Blythe Danner, Parker Posey, Martha Plimpton, Robert Sean Leonard, Campbell Scott, Peter Gallagher, Bill Irwin, Dylan Baker. Each seems to truly enjoy the story being read.

I love this man's work!

Published by Thriftbooks.com User , 20 years ago
I first became acquainted and fell in love with the work of F.Scott Fitzgerald when I read a hardback copy of The Great Gatsby in my early 20s. Since then, I have read Tender Is The Night and This Side of Paradise, so when I discovered this collection of stories by my literary hero, I floated up to the cieling. My favorites include The Diamond As Big As The Ritz and Bernice Bobs Her Hair, and anyone who has not already been introduced to Fitzgerald, either in English class at school or while browsing in a local bookstore, it's not too late to change your mind, and it is my sincere hope that you will love this man's work as much as I do!

I could listen to this over and over

Published by Thriftbooks.com User , 20 years ago
I was delighted to find out that not only were F. Scott Fitzgerald's short stories being narrated on audio cassette, but that one of the performers was none other than Robert Sean Leonard. Scottie is by far one of my favorite American authors. It takes an incredible talent to condemn the life you live in your literature, and when I think how he strived for excellence but fell victim to society, I can't help but pity him. His writing is so delicious to read as well. He has such wonderful similies and metaphors, and is so descriptive I can taste the wine, feel the rain and see the stars. The Jazz Age is one of my favorite time periods and F. Scott Fitzgerald captures it perfectly. You see the glittering side but then the glitter gets tarnished as it must. What is even better about this audio is that one of the narrators is none other than my favorite actor, Robert Sean Leonard (better known as Neal in Dead Poets Society and Claudio in Much Ado About Nothing among other films). His voice is wonderful to listen to, even if you're not a fan of his acting. It's perfectly clear and flowing and it reminds you of listening to your parents reading you a bedtime story. The tape itself leaves you feeling as if you've been on an emotional rollercoaster. There's a nice beginning, then it peaks with conflict, the resolution, and then the end finishes as calmly as it started. Yet you've gained something from it. Fitzgerald has some incredibly phenomenal themes in his work. The odd part is that I usually don't like getting audio books, but I certainly reccomend this audio of The Stories of F. Scott Fitzgerald" It's worth every penny.

Published by Thriftbooks.com User , 20 years ago
Surely an icon in the annals of American literature, F. Scott Fitzgerald produced a body of work which epitomized the Roaring Twenties. It has been said that his dominant influences were "aspiration, literature, Princeton, Zelda Sayre Fitzgerald, and alcohol." Nonetheless, his writing possesses an urgency, a bite, unrivaled by his peers. Collected in this superb audio are nine of his early stories performed by accomplished actors. Broadway/film actress Blythe Danner reads "Bernice Bobs Her Hair," a narrative inspired by a lengthy letter Fitzgerald wrote to his younger sister, Annabel, in which he offered advice on how she could become popular with boys. "The Jelly-Bean," read by Dylan Baker, takes place in Georgia. Fitzgerald credits his wife for her expertise in helping him write a portion of this tale involving crap shooting, saying "as a Southern girl" she was an expert at this endeavor. The talented Peter Gallagher reads "Head and Shoulders," the first of Fitzgerald's story to appear in The Saturday Evening Post. Also found in the collection are "The Diamond As Big As The Ritz," "Dalyrimple Goes Wrong," "The Ice Palace," "Benediction," "The Curious Case Of Benjamin Button," and "May Day." This is an exemplary combination of memorable prose and oral presentation, a remarkable listening experience.
Copyright © 2020 Thriftbooks.com Terms of Use | Privacy Policy | Do Not Sell My Personal Information | Accessibility Statement
ThriftBooks® and the ThriftBooks® logo are registered trademarks of Thrift Books Global, LLC