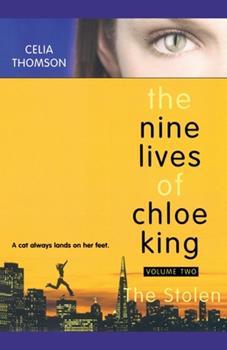 (Book #2 in the The Nine Lives of Chloe King Series)

She argues with her mother. She occasionally skips class. And she alternately crushes on two totally different boys. But Chloe King is by no means your typical teenager. The girl can scale buildings and see in the dark. Sometimes, at night, she even likes to leap from rooftop to rooftop. Yes, Chloe has the instincts and ability of a cat. And that makes her unique indeed. It also makes her a wanted woman. Because the Order of the Tenth Blade does not...

Published by Thriftbooks.com User , 15 years ago
I have to say, this is the best of these three books, and probably the best book I've ever read. And I've read a lot. I can't say exactly what I liked so much about this book, but I love it. I currently have it checked out from the library and I don't want to return it. It's definitely worth a second read. And a third...

Published by Thriftbooks.com User , 16 years ago
I particularly enjoyed reading The Nine Lives of Chloe King, The Fallen by Celia Thomson, because it is very exciting and has lots of "cliff hangers." Every chapter ends in the middle of an important event and it urges the reader to keep reading. The book has a very interesting title. When I first read the title, I wondered," How could anyone have nine lives?" I had heard that cats had nine lives, so I was curious to find out more about Chloe King. The book is about a girl with supernatural cat-like qualities, and how she deals with them. The events that reveal her powers to her are truly strange, even though her powers are equally strange. For example, Chloe and her friends decide to skip school and go to the tallest tower in their city to hang out. Chloe trips and falls out of a window, but she does not die. This is the beginning of how she discovers she has nine lives. Other than having more than one life, she grows claws on her hands and feet, sees better in the dark, is more agile, and can scale walls. It turns out that Chloe is Mai, a race of people who are half-cat, half-human. The Mai are being hunted by people in The Order of the Tenth Blade. The purpose of the Order is to eliminate all Mai before they take over the world. They are trying to kill Chloe, but Chloe keeps getting away. That is what makes the story interesting. This book is the first of a series of three books about Chloe King. They are all equally interesting. People who like science fiction or are interested in cats will probably enjoy the book. I suggest reading the series.

The Order of the Tenth Blade...

Published by Thriftbooks.com User , 17 years ago
Sixteen-year-old Chloe King used to be the typical teenager until she started growing claws and developing feline characteristics, including developing nine lives. However Chloe's secret abilities not only make her special, but targeted, by The Order of the Tenth Blade, an organization out to destroy all of Chloe's kind. Gradually Chloe begins to understand her true nature and that she is part of the Mai, and Easter European species of humans that have developed unual powers of a cat. Chloe is not alone in her fight against The Order of the Tenth Blade, who will stop at nothing to destroy the Mai. However keeping herself alive may be easy compared to keeping her family and friends, Amy and Paul alive. Unfortunately they don't have NINE lives, they just have one. Can Chloe trust Brian, a member of the Order who says he is on her side to help her? And what about her attractions to him? Are these attraction making her blind to Brian's true nature? Ultimately, can she trust him? More developments in the second book made this a tad better than the first installment. There were more suspensful moments and the book moved along just fine. Still not the best supernatural series out there which is why it doesn't deserve 5 stars. Still, I really recommend teens who enjoy the FEARLESS series, which just ended, to pick up this new series.

Exciting New Addition to 'The Nine Lives of Chloe King'

Published by Thriftbooks.com User , 17 years ago
Sixteen-year-old Chloe King may seem like your average teenage girl. She skips class, fights with her Mom over petty things, and can at times crush on more than one guy at a time. However, Chloe has a secret. She's no typical teenager, like she wants you to believe. Instead, she is superhuman, possessing the abilities to see clearly in the dark without glasses or contact lenses, and scaling buildings. Not to mention that she enjoys leaping from rooftop to rooftop in the dead of night, while everyone else is in bed fast asleep. If it isn't obvious to you yet, it will be soon. For Chloe has the agility and instincts of a cat. Which makes her very special. As well as very wanted. For now the Order of the Tenth Blade is after Chloe. And they don't stop stalking someone with Chloe's abilities until they're dead. As a huge fan of Celia Thomson's THE FALLEN, which was the first book in THE NINE LIVES OF CHLOE KING series, I absolutely knew that I couldn't miss THE STOLEN. To my surprise, I found it to be even better than the previous book in the series. Chloe is an interesting character, who is intelligent, quick-witted, and fun to read about. Her wacky friends - Paul and Amy - add a wonderful element to the story, giving the reader even more people to relate to, whether it's to Paul with his comic book obsession, or Amy with her love of crazy clothes. Overall this was a wonderful new addition to THE NINE LIVES OF CHLOE KING series. I am now eagerly awaiting the release of the third book THE CHOSEN. Erika Sorocco Book Review Columnist for The Community Bugle Newspaper
Copyright © 2022 Thriftbooks.com Terms of Use | Privacy Policy | Do Not Sell My Personal Information | Accessibility Statement
ThriftBooks® and the ThriftBooks® logo are registered trademarks of Thrift Books Global, LLC