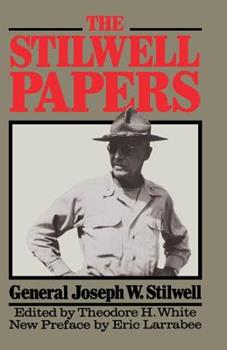 (Part of the Light on China Series)

His American men worshipped him. The Chinese armies he trained and led would have gone through hell for him. But the politicians, both in Chunk-King and Washington, hated his guts. And after two and a half years of bitter struggle in the China-Burma-India theater during the dog days of World War II, General Joseph W. Stilwell was abruptly relived of his command and brought back to the U.S. in an "atmosphere of crime."From the time he flew to the Far...

Published by Thriftbooks.com User , 14 years ago
In 1948, a year before the Kuomintang was chased out of China, but when the outcome was not in doubt, the widow of Vinegar Joe Stilwell published his papers from the war. Probably no indictment of any government's policy has ever been published that was so powerful and so timely. Nobody paid much attention. By that time, nothing much could have been done, and even in 1942, when Stilwell was appointed chief of staff to either Chiang Kai-shek or the Nationalist Army of China (it was never really clear which), China was beyond hope. That, however, didn't stop Stilwell from trying. He was, as these papers show, the most remarkable man to wear Uncle Sam's uniform in those days, as good a judge of men as Marshall, as daring a battle leader as Nimitz and as thoughtful as Spruance. Unlike those three, he could write a better than passable poem when the mood struck him. Theodore White, later a best-selling policial analyst, but then a reporter in the China-Burma-India theater, put Stilwell's miscellanceous papers together shortly after his death. White says they are not an intimate diary, but in fact they are. No diary of any high commander of any nation during the war, that I know of, is more intimate. Also included are several short papers -- some just incomplete drafts -- in which Stilwell attempted to explain to the politicos what was going on. These are remarkably well formed considering their brevity. Stilwell could not have known how Churchill demanded of his staff that position papers be limited to a page -- a crippling necessity for the top managers in a world-circling conflict -- but Stilwell was, obviously, a top-notch manager. Lord, how he hated Peanut (Chiang) and despised the Limeys! In one ruminative paper, written for himself and not others, he concluded that the prime consideration of a military commander in war was character. This was a very American thing to think and not so very original for a man who was young in the 1890s. American writers like William Dean Howells reflected on character obsessively in the Mauve Decade. The norms of that sort of character were captured on the stage in 1916 in a once-popular, now forgotten play, "The Man from Home," by Harry Leon Wilson and Booth Tarkington: Shrewd, tough, never laying all his cards on the table when playing with sharpers, smarter and more worldly than he looks. Barbara Tuchman's "Stilwell and the American Experience in China" provides more background and was written to draw lessons for a people and a government that were blundering about foolishly and ignorantly in Southeast Asia. Hers is an excellent book, but though she tries, she does not capture the spirit of the man half so well as he does himself. Today, the American people and government are again blundering foolishly and ignorantly around Asia, making the same dumb mistakes that Stilwell was pointing out in 1942-44. "The Stilwell Papers" is a book as thoroughly forgotten as Wilson and Tarkington's "Man from Home

Published by Thriftbooks.com User , 15 years ago
A man of no pretense and extreme bravery who played a key role in the China- Burma- India theater of World War 2. He refused a chance to fly out of Japanese offensive action in order to lead- that is to say walk out of Northern Burma to India with responsibility for a polyglot group including Americans, British, a contingent of Burmese nurses, and a few others numbering about 100. He led his group across mountain ranges with inadequate supplies, staying ahead of the Japanese, marching his group at a standard (Army) pace of 105 steps a minute, fording rivers such as the Chindwin, one of 4 principal Burmese rivers which empties into the irrawaddy. This all at an age of 59 or thereabouts. He lost not a single life in this arduous slash through the jungle and mountains. He was a favorite of Gen George C Marshall and Sec'y of War Stimson. He was key in developing the means and methods for the Allied return starting in late 1944. My review is inadequate to characterize this relatively unsung hero of WW2. Should you have further interest in this remarkable man's life I encourage you to read Barbara Tuchman's "Stillwell and the American Experience in China" and follow it with this book. Both are page turners,and instill pride and admiration for Stillwell as America's top General in the CBI theater.
Trustpilot
Copyright © 2022 Thriftbooks.com Terms of Use | Privacy Policy | Do Not Sell or Share My Personal Information | Accessibility Statement
ThriftBooks® and the ThriftBooks® logo are registered trademarks of Thrift Books Global, LLC