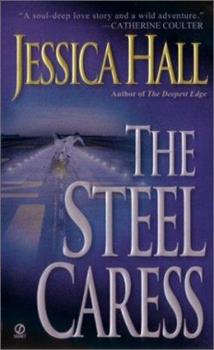 One of Catherine Coulter's favorite new storytellers, Jessica Hall sweeps readers away to the very edges of danger and desire-in her second contemporary tale of romance, intrigue,and heartrending betrayal... Raven had no intention of ever returning to her life as an undercover government agent. The stunning beauty didn't doubt that years ago she'd been betrayed by the agency she worked for-and by her devastatingly handsome boss, General Kalen Grady...

You won't be disappointed

Published by Thriftbooks.com User , 18 years ago
I just finished Jessica Hall's second offering, STEEL CARESS. I really was worried about romances by SL Viehl, since I found the romance between Chejiro and Duncan very creepy in the STARDOC books, and after the first book, THE DEEPEST EDGE, I thought the books would go downhill. STEEL CARESS, however, was an excellent book. Kalen and Raven, strong secondary characters from THE DEEPEST EDGE, have been enemies for a few years, and you really need to read THE DEEPEST EDGE to understand the story. He was her commander, and after a disasterous mission in China he was the man she hated second most in the world. Now the assasin who ruined her face has reappeared and Raven is willing to do anything to catch him, even work with Kalen, who is after him to stop a tong war. The chemistry between Kalen and Raven was pretty strong. It didn't exactly scorch off the pages, but their past relationship filled the unspoken moments in every page. The mystery stays strong, and the author really juggles all of the elemnts of a complicated story with great skill. The secondary characters, too, were well drawn. Val and her husband and Lily from THE DEEPEST EDGE make the occasional cameo, as does Sean. Kameko, the heroine from the to-be-released third book also lights up the pages with a few flashes of spirit and fire. It have a feeling that THE KISSING BLADES will be one to buy.

Published by Thriftbooks.com User , 19 years ago
Former agent Sarah Jane Ravenowitz blames her then employer General Kalen Grady for the failure of her mission in China that led to the deaths of her team and to her barely escaping. She knows a mole in his organization double-crossed her. Though he planned to propose to her when she finished that mission, Sarah Jane went overseas to become a supermodel known by her adoring fans as Raven.When Gangi Dai, son of the mob boss of the notorious Chinese-American crime syndicate Dai Tong, is killed with model Portia at a Japanese Embassy reception, Kalen, though he suffers from unrequited love for the ghost of Sarah, knows he needs Raven's help. He wants his former super spy to infiltrate the Dai Tong family to stop a deadly assassin who has killed already from doing it again. Raven agrees on the condition that Kalen erases her criminal record of going AWOL. She plans to skip his team and depend only on former Kalen agent Sean Delaney, who will watch her back better than the General she still loves.The second Swords book (see THE DEEPEST EDGE) is a sharp romantic suspense starring two competent courageous characters who have a past to overcome and a mission to survive before they can seek a new relationship. The action-packed tale moves quickly forward, but has the feel of the middle tale because, in spite of a strong romance between powerful protagonists, the prime chase for the swords moves only slightly forward. Jessica Hall provides a wonderful romantic thriller that the audience will appreciate and will look forward to the conclusion starring the enigmatic Sean.Harriet Klausner

Published by Thriftbooks.com User , 19 years ago
Now a world famous model, Raven had been a renowned undercover government operative until the day she was left for dead, betrayed by her superiors and by her former lover General Kalen Grady. Living in Paris and leading the high life while hiding from the U.S. military where she is considered to be AWOL she unsuccessfully tries to forget her love for Grady. Now Grady is asking for her help to destroy a ruthless Tong leader. In return she will be absolved of her crimes and allowed to return to her country.This story is the second in a trilogy by Jessica Hall. If not for the comparison to the first in the series, "The Deepest Edge" which was even more informative, erotic and suspenseful, I would give this one five stars. It is exciting, suspenseful and well written. The characters, who were introduced in the previous book are well drawn and likable. Jessica Hall demonstrates her knowledge of Eastern art and culture while telling a fascinating tale.
Trustpilot
Copyright © 2022 Thriftbooks.com Terms of Use | Privacy Policy | Do Not Sell My Personal Information | Accessibility Statement
ThriftBooks® and the ThriftBooks® logo are registered trademarks of Thrift Books Global, LLC